Pac-Mania is yet another Pac-Man arcade game. It differs from the others by the ability to jump and the possibility of up to 11 ghosts in a level (some of whom can also jump).

Some larger sizes of the Pac-Man head seen on the title screen in the international version. While the third one has its own "highlight" graphic (as the full sprite is made by layering two separate ones together), it's just a duplicate of one of the smaller ones and does not properly fit.

Some differently-sized sprites for the Ghosts from the title screen in the international version and the Jungly Steps intermission screen in all versions. Different sizes of the Ghost are used compared to the equivalent Pac-Man graphic.

Unused graphics for the Pac-Land-based Pac-Man seen on the high-score screen in the international version of the game.

Some Ghost eye graphics, taken directly from Pac-Land. These appear to be placeholders for the shaded ones.

A HUD icon for the Galaxian special item. Since, unlike the original Pac-Man, it is NOT a regular fruit, this goes unused. 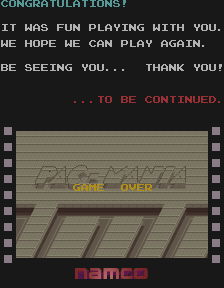