Pac-in-Time is a "sprite swap" of a 1993 Amiga game, Fury of the Furries, developed by Kalisto. 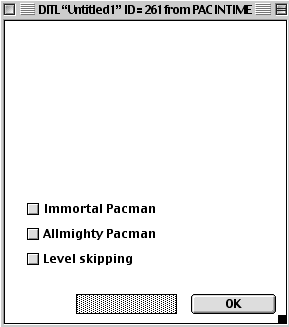 DITL 261 has a window containing the features "Immortal Pacman", "Allmighty Pacman", and "Level skipping". The size of the window suggests there might have originally been a picture that accompanied it, though this may also be due to the fact that the window is based on the accessible cheat menu from Fury of the Furries. There doesn't seem to be any code remaining to access it.