Pajama Sam in "No Need to Hide When It's Dark Outside"

Pajama Sam in "No Need to Hide When It's Dark Outside" is another kids' adventure game from Humongous Entertainment and the first in the eponymous series. It stars a teal boy named Sam who journeys to the center of his closet to capture Darkness and put him in a lunchbox.

Don't ask, this is Sam's answer on how to conquer his fear of the dark.

This game has a set of standard debugging features shared with many other Humongous games. To enable them, add SputmDebug=90996 to the hegames.ini configuration file. 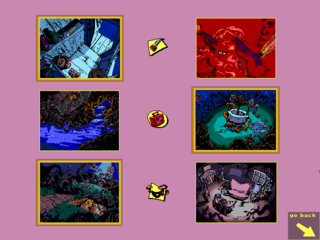 Activated with C. Clicking on a picture places the indicated item in that location. 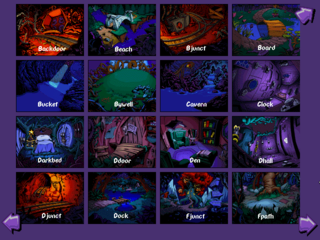 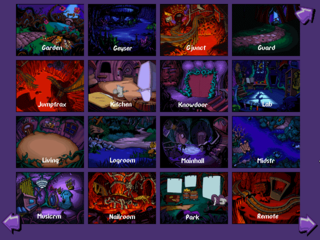 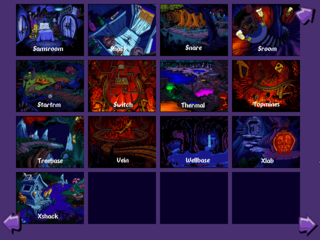 Activated with G. Clicking on a room's icon warps Sam to it. 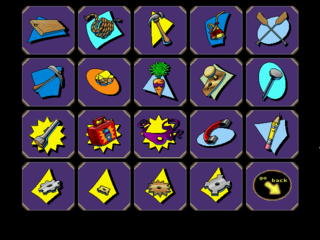 Activated with I. Clicking on an item places it in Sam's inventory.

This game has quite a few unused graphics. Many of them are storyboards or sketches for existing scenes, but there are also quite a few graphics for features that were reworked or scrapped entirely.

While most of this game's graphics have some basic metadata attached (name/description, date, etc.), the unused graphics generally don't. Those that have names are noted below.

This complete or near-complete animation shows Sam trying and failing to fish the lunchbox out of the water with the oars. This seems quite sensible... except the oars don't actually exist in the underwater-lunchbox path.

Although all the graphics and animation data are in place, the relevant dialogue seems to have been removed. The trigger for the animation was also removed, so even if the oars are added to the inventory with debug mode, trying to use them on the lunchbox just gives the generic "I don't think that will work" message.

Storyboard of Sam traveling through the rotating door. His cape doesn't get caught in the final.

A couple of this game's music tracks never see use.

A few bits and pieces of dialogue were excised from the final game.

This short conversation would have taken place after the Brain Tickler. The first line mistakenly leaves in a RIFF WAVE header from the original file used to store it, resulting in a static pop at the start.

Stored in the scripts for the grandfather clock room. Could be either a cut line for the clock or a debugging message. It's impossible to be invisible in this room, so it doesn't make much sense either way. 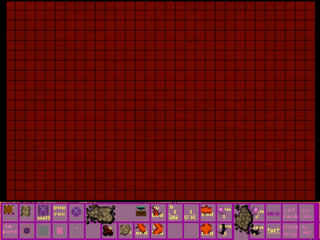 Room 62 is devoted to a mostly-functional level editor for the Nuggets minigame. It's most easily accessed through debug mode's room warp or ScummVM's debugger (with the command room 62).

Although the whole thing is a little quirky, most of its functionality is there. Clicking on an icon in the lower display selects it for placement and advances it to its next "form" - for example, the mine cart cycles through facing right, up, down, and left. Left-clicking in the level display places the current object, and right-clicking blanks the selected tile.

There are also a few special buttons:

The save and load functions seem to be broken. Both open dialog boxes that prompt for a level to save/load, but neither actually does anything. 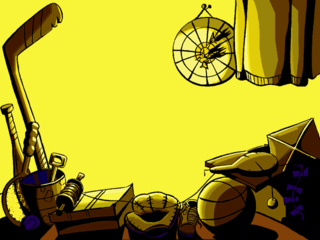 Adding E3Demo=90996 to hegames.ini turns on a special mode that was presumably used to demonstrate the game at E3 1996. When it's enabled, the game displays the usual logos when it boots, but then plays the "Wa-oh" voice clip from when Sam gets sucked into his closet and switches the scene to an otherwise unused "flash-lit" rendition of the closet. Oddly, this screen includes a dartboard and coat that aren't present in the actual closet cutscene, so perhaps the graphic was touched up a bit after the demo was made.

Hitting Escape or pressing the left and right mouse buttons at the same time starts the game from the first screen in the Land of Darkness. Leaving the screen leads directly to the mine-dock-house junction instead of the bridge with the floating board. On this screen only, pressing Escape will for whatever reason have the same effect as clicking on the exit.

From here on out, the game plays normally, with a few differences:

Like all post-Putt-Putt Goes to the Moon Humongous games, Pajama Sam has subtitles for every line of dialogue but no in-game option to turn them on. Adding TextOn=1 to hegames.ini enables them.

Normally, if you try to ride the dumbwaiter to the laboratory with the chemistry potion book (and the invisibility potion), it will make the stove spout smoke, and then say: "That's a no-no, we avow it. No, we simply can't allow it."

However, there's an extra verse that the Dumbwaiter will sing, and an extra action it will do, if you do a special set of steps:

It seems like this easter egg is repeatable, thankfully, so it doesn't happen once-per-game. 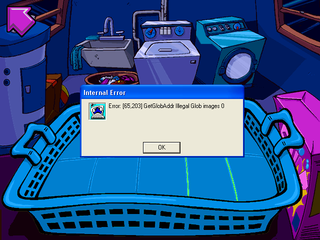 The forest on the other side of the river (labelled "Fpath" in the path select screen) contains a potentially fatal bug. Sometimes, the game will spawn an invisible sock on a tree branch in the upper-right corner of the room (normally this is the green sock; if it is visible then this bug will not occur). Picking it up leads to the usual laundry room scene with either a white sock or an invisible sock. If the sock is white, the game will continue normally, although picking up two other white socks makes it impossible to collect a full set of ten matching pairs. If the sock is invisible, though, trying to put it in the basket will crash the game. This was fixed in the 1999 revision.

Even though the sock bug was fixed, an error that a normal player will far more likely run into snuck in. Some of the well's dialogue is, for whatever reason, from the Dutch dub. Presumably the Dutch dub was used as a base for this revision, and the developers forgot to change the lines.