Paper Mario: Color Splash is a mixed bag if ever there was one. While it has a much larger and more creative world than its immediate predecessor and the trademark Paper Mario wit is still there, the game still follows many of the hated design decisions from the last game while adding some annoying mechanics of its own, leading to many heated (ahem) scraps over whether or not it's better than Sticker Star.

Paper Bowser (spoilers?) does talk again, so that's something.

As seen in various filenames, the project's internal name appears to be "gojika".

Some cards can only be obtained as "pre-colored", yet have unique behavior for being "un-colored" or "less-colored": 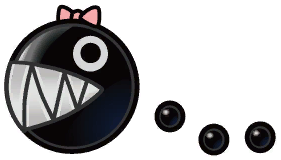 A sprite of Princess from Marmalade Valley, depicting her as a 2D sprite like the pictures seen in the Professor's house. When she appears in said location, she uses a cardboard-like 3D model instead of sprites. Notably, the Chain-Chomp sprite used here seems to be based off the one from The Thousand Year Door and Super Paper Mario, rather than the artstyle seen in this game.

grasslandenv in BTL_ENV_Common.bfres.lz is a screenshot of a house with a mailbox, in a style based on Decalburg from Paper Mario: Sticker Star. A piece of Color Splash's concept art from the in-game gallery features this style. There are also some concepts for Ruddy Road that feature more prominent "grass stripes", like in this early style.

robj_btl_fan_envmap in BTL_ENV_Fan.bfres.lz is a distorted screenshot of an early cafe.

The biggest and most infamous localization-related change which happened in this game stems not from an idiom or anything controversial, but from nothing more than a washing machine. Indeed, in the Japanese and North American versions, the Washing Machine thing is styled after the "top-loading" kind, while in the European versions, it was changed into a "front-loading" one. Seeing how the top-loading kind of washing machine is much more common in North America or Asia, it being changed into the more recognizable front-loading kind was more than likely meant to make its purpose more clear to European players.

The artwork on the Washing Machine's card was updated to reflect the design change.

Moreover, the unique "Laundry Guy" is replaced with an ordinary Red Shy Guy that only appears when Mario wrings out the washing machine, albeit with the same dialogue. Because the latter only appears when he attacks Mario, the former enemy type and the line the former says if Mario talks to him before wringing it out are left unused in those versions:

All shader files in the directory shaders has source sdk project files not compressed in any way.

The game's executable has a BUNCH of launch commands coded.