Paper Mario: The Origami King is the sixth installment of the Paper Mario series, which follows Mario on his quest to stop his world from being folded into origami by the titular villain.

The game is seen as a big upgrade from the last two games by most fans, despite the continuation of the ban on RPG mechanics and original characters. 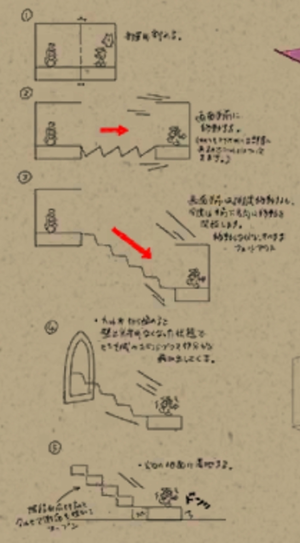 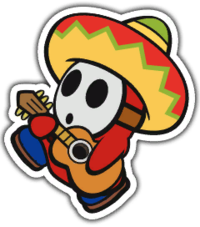 Sombrero Guy from Autumn Mountain was apparently originally intended to become a (temporary) party member like his amigos Spike and Bone Goomba. However, him becoming a party member was cut from the final game leaving his party member code unused through normal means but, through save file hacking you can add him as a party member. Under party_infor, add P_HEISOM to the partyMemberName field and update the partyMemberNum field accordingly. He does appear in the pause menu, using an unused pause menu icon (see right, located in ui/menu/SheetStatus.bfres.zst), but doesn't appear in battle.

Found in ui/menu/SheetStatus.bfres.zst is this image of a colorful gradient, resembling the kind of gradient you'd typically see on color-pickers in image editors. 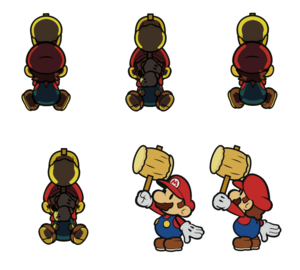 Mario has graphics (character/pera/P_MAR_E.Default.bntx.zst) depicting him holding a hammer, which go unused because the hammer obtained in-game is never a sprite and is, in fact, a 3D model.

Species that appear as enemies in Paper Mario: Color Splash have many (if not all) of their attacking, taking damage, etc. graphics and animations left unused. 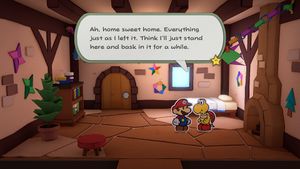 The Red Koopa Troopa is present. 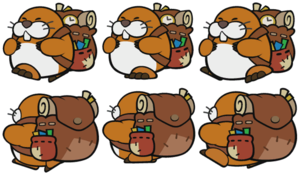 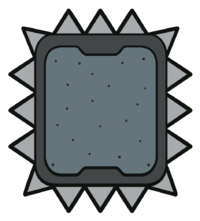 The 2D Thwomp (P_DSN.Default.bntx.zst) has corresponding back graphics for each front graphic, although they are all identical. 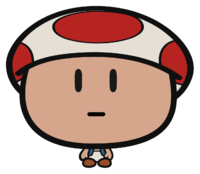 The graphic used for the Toad's face as seen through the right-hand telescope on Overlook Tower has detail for the head and body too, but this is obscured by the telescope border.

Note that the word "puzzle" is misspelled in both files.

A music track that went unused. The file name implies that it was meant to play somewhere within the Green Streamer Area.

If the player somehow manages to bring Professor Toad to the Fire Vellumental Cave before defeating the Fire Vellumental itself, his textbox will display "?WG32_185?" if he is talked to. The text is actually the title of an entry in RomFS/msg/(language folder)/WG32.msbt/, and it probably shows up due to the game trying to load a non-existent message, similar to placeholder text in the previous Paper Mario titles.

The game is named RockG internally, according to strings in the executable. This is possibly a reference to the game "Rock Paper Scissors".