From The Cutting Room Floor
< Paper Mario: The Thousand-Year Door
Jump to navigation Jump to search
This page contains changes which are not marked for translation.
Other languages:
English • ‎русский • ‎한국어

This is a sub-page of Paper Mario: The Thousand-Year Door.

Text that was only used for the game's E3 Demo.

Placeholder tattles for the E3 demo. These don't appear on the Interactive Multi-Game Demo disc version of the game.

Spoken by the gatekeeper Koopa. You were sent to a Bowser platforming stage afterwards. This also appears in the Interactive Multi-Game Demo disc version of the game, and was obviously created for demo purposes.

This is a duplicate of a message used in the final version. 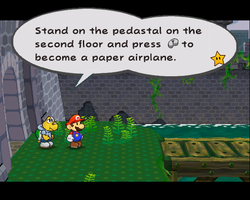 A screenshot from the demo

This message is in the final game, but it ends after the second block of text. Full message was used in the GameCube Interactive Multi-Game Demo discs, which presents a possibility that this message was never intended for the real game, and instead was made just so the people playing the demo would know what to do. 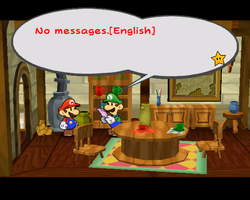 The error message in action.

Language-specific placeholder text that appears whenever the msgSearch function (which uses a key passed to it to try and find an appropriate message) fails to find a message. There is a copy for each language, though only the Japanese one is in its own language (which translates to maybe "There is no message"). These messages are not located inside the normal text files, which makes sense; the error message wouldn't be able to show up if the text files were corrupt. Instead, the messages are stored in boot.dol.

The Boat and Plane Panels cannot be tattled, so these messages can't be seen.

A message for a corrupted save file. The final game doesn't allow an individually corrupted file to be deleted. The only option is to reformat the card.

An event that would most likely occur on the Moon.

Would fill the audience with Punies, obviously. Possibly meant for the Chapter 2 boss.

The Shy Guy pulled a prank!

Unused action for the Shy Guy audience member, this would prevent the player from running away.

Located among the party member name strings at the beginning of global.txt is one for an eighth "partner" named Ryouta. This is, of course, referring to the game's director, Ryota Kawade. The string is only present in the Japanese version, and was removed wholesale from the international releases. The name is also unique in that it is rendered in hiragana, while the other characters all have katakana names.

An odd message from Grifty. Since Grifty always has stories to tell, and he'll retell them to you, this message never has an opportunity to pop up.

Short menu messages that would appear when selecting an option from the Luigi's Stories menu. In the end, these weren't really needed.

Self-explanatory. Luckily, this never pops up.

At the end of Merluvlee's data in tik_00.txt are a few of her badge hints from the original Paper Mario. Various quirks of the text indicate that these may have been placeholders for new hints and not simply leftovers, meaning that Merluvlee was at one point going to locate badges as she did in the first game:

Additionally, the text was retranslated in the English version (which introduced a few errors, like "Cold Cold Mountain" for Shiver Mountain). The new lines are more stiff and literal, possibly indicating they were only base translations that hadn't yet been "punched up" by the localization team. The equivalent Paper Mario text (both Japanese and English) has been included for comparison.

The Thousand-Year Door hint uses a string format specifier in place of the badge name. Paper Mario does not, since all badges are in limited supply in that game (the Rowf badge hints are simply duplicate messages with the name hardcoded in), so Jump Charge's hint is provided as an example.

Unlike the other messages, this is not from Paper Mario. Dazzle is referenced by name in both languages, and the Merlow hints are not nearly as barebones.

The English Thousand-Year Door hint says Flower Saver, but the Japanese one refers to Happy Flower.

Gatsūn Nagūri (Power Smash) was mistranslated as Quake Hammer in the Thousand-Year Door hint. Interestingly, there is a Power Smash badge in Toad Town Tunnels in Paper Mario, but the hint for it is different from Shrink Stomp's.

Dizzy Stomp does not appear in The Thousand-Year Door.

Filler text for two fighters that never made it into the game.

All four possible partners have dialogue when first entering the major league locker room. Because Yoshi is required to beat the Iron Clefts, and partners can't be changed before this cutscene, only his dialogue is used.

A message that would have been spoken by the Twilight Town shopkeeper after the pig curse was broken. In the final game, he's already back at the shop by the time you beat Doopliss.

Text when leaving Twilight Town after Chapter 4. Since all of Mario's other partners were turned against him at this point, the player can't change partners, so only Vivian's dialogue is used.

This is an unused message for hitting poor Whacka.

Messages that would have popped up from the people on the shore during the battle between Cortez and Lord Crump.

An extended bit of dialogue from Bobbery while he's being attacked by ghosts.

Messages from the businessman and possibly Heff T. These would have appeared after the Nitro Honey Syrup / Galley Pot mysteries were solved.

Sleep in the bed?
The prompt for resting in bed appears for Day 3. It's not possible to rest at this point, so this was never used or translated.

There's a lot of descriptive text in the freight car that is never used. It seems the player would have been able to look through the crates in the room, likely while in search of Ghost T.'s diary. The third set of messages is likely for when the player finds the diary, as a book would be able to fit between drink bottles. It could also apply to the missing Gold Ring or Shell Earrings, but none of the passengers' missing items are found in the freight car.

An unused tattle for the fake Zip Toad / Doopliss, who runs away immediately after getting to Riverside Station.

Completely unknown who would have spoke this dialogue. The only likely candidate is Doopliss, since he knows who Beldam is.

An additional note from the people who once occupied the station. This might have been removed because it gives away the location of the key.

While holding the A Button, rotate the Control Stick,
then release to do an Ultra Jump!

A simplied version of the Ultra Boots tutorial. Possibly a temporary message.

This appears in the main X-naut control room. The use of Katakana here is meant to convey a robotic voice.

An odd message for all partners. There's nothing to open in the throne room in the final version, unless they're talking about the door out.

Messages for four different traps/devices that would have made the Pit of 100 Trials harder to complete. Less monotonous, though.

The graffiti is carefully written. It won't erase!!
This is a shorter version of a message seen when examining the graffiti on floor 50 of the pit.

Three of these exchanges were translated, one is in Japanese, untranslated, and three of them are temporary messages.

Mario! It's like a dream come true to see you again.

Of course I'll go with you! I'll follow you wherever you want to go.

Vivian has joined your party!

Nice to see you again.

Retrieved from "https://tcrf.net/index.php?title=Paper_Mario:_The_Thousand-Year_Door/Unused_Text&oldid=1176365"
Categories:
Cleanup > To do
Subpages