Patapon 3 is the third—and currently last—game in the series, and the first Patapon game to introduce multiplayer via PSN. The debug menu for this game is CRAZY customizable.

There is test text and a few names hidden in the title screen. There is no known way to view them in-game.

These songs can be found inside the atrac folder.

A test file. Level 3 stands for fever, and 01 stands for the first part of fever. Can be found in incomplete theme files in the 100 Hour "Full of Surprises" demo.

Unknown what this could have been used for.

This would play if you tied scores in a VS match. However, since red team always wins by default, this is never heard. However, using the debug menu, you can create a tie.

This is a leftover from the multiplayer demo. It plays when you clear a dungeon floor, and go to the next one.

Audio from the Patapon 2 intro.

Music that plays on the title screen of Patapon 1.

Alternate theme for Yarigami. You can play this in the demo.

Alternate theme for Tategami. You can play this in the demo.

Alternate theme for Soragami. Unlike the others, this is not playable in the demo. The demo uses a... different version.

Alternate theme for Yamagami. You can play this in the demo.

These themes can be played during a quest by setting the variable at 0x7277C8 (EU) and 0x724848 (NA) to the below values before deploying for the quest.

This seems to have been intended for the unused Hell Gate VS mode, but since there are no quests that involve the VS mode, this goes unused.

According to the creator of this theme, this was meant to play in the intro mission of the game. It also plays during the credits, and is also played while in the unused DLC mission "Cosmo Serpent Waros".

There exists about 6 unfinished themes, along with hundreds of "No Translation Needed"s. They are not listed here as they would clutter the page. There could possibly be more than just these.

All dark heroes have a voice line where they say their Japanese name. Ravenous's is used in-game, but it is included here to keep consistency.

A memory/dream sequence cutscene. Shows the hero being tortured by the archfiends, possibly trying to force him to become a dark hero. This would have played after finishing the first dungeon. This cutscene was probably removed to lower the age rating of the game.

A cutscene exists of the uberhero and ragewolf hopping on screen in the field of giants. Viewing this cutscene will softlock your game, as there is no way to skip it, and it never ends.

The uberhero and Ragewolf exchange dialogue in the Field of Angry Giants. What they say will shock you.

After they finish saying this, the cutscene ends.

The uberhero and Ragewolf exchange dialogue in the Dark Hero Hideout. Ragewolf is layered behind the armory. They say the following:

After they finish saying this, the cutscene ends.

Patapon 3 has a detailed Debug Menu that can only be enabled by the use of an undisclosed method. The Debug Menu has its own page.

A menu exists where you have slots for your set skills instead of choosing them freely. The Set Skills selected still have the same effect when selected this way, but the menu also shows the Set Skills changing the character's stats when you equip them, so it's pretty useful. 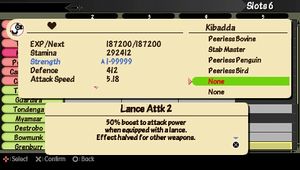 Not what you thought, eh?

This game has a bunch of these. Planned, scrapped, forgotten, and ultimately, never released.

These missions feature the default Training Grounds background and an end post at the start of the forest section. The Cumulative Training mission however is unique. 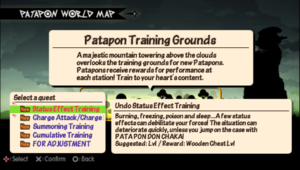 This mission is completely blank. The background is blank, and there is no end post. However, the retire option available from the Start button is disabled, so once you enter this mission, the game is soft-locked and can only be escaped by restarting the game.

Garuru was Black Hoshipon's pet in Patapon 2 that you fought at Magic Hill Zozozo. He was meant to reappear in this game, but for some reason, never got released.

The Cosmo Serpents are unfinished or unused bosses. They seem to be the "ultimate" bosses of the game, even stronger than Gheek Dongara. Cosmo Serpents also hold a huge resemblance to the dragons seen in dungeons and story missions. Baros is the first variant, which also means he is the weakest of the trio. Colored mostly gray and red.

Waros is the third variant, and naturally the strongest of the trio. Colored a sickly green.

This was the 9th DLC mission. You can see more about it here.

This mission doesn't appear on the worldmap. The description and title are there for it, though.

At 0x7166A0 (EU) or 0x713680 (NA) is text for two unused options in the barracks, which are "Reinforcements" and "Rally Patapons". Forcing the game to select either of these options will cause it to crash.

These two options are most likely related to the cut feature of having additional squads of Patapons alongside your main party, which can be seen in action in various E3 screenshots and the E3 video.

No idea what these would have been used for. 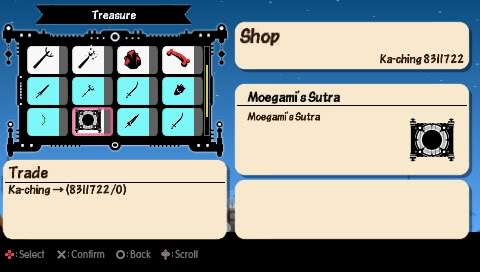 Every item from Patapon 1 and Patapon 2 are still present, yet most of them are never used in the game.

There is a sutra in the game which is never used, and is only obtainable by hacking. Using it whilst in a quest will make a blank sutra appear, and play the Yarigami theme. The sutra icons in a quest also appear white.

Early in development, Patapon 3 was going to be like all the other Patapon games with 3 new classes coming in, just like Patapon 2. This obviously changed. Selecting any of them makes you invisible, this is caused because by default they don't have any equipment and appearance data. Like many other unused elements in the game, these classes were probably imported from older Patapon games and not implemented.

A video of how they appear on the class selection screen is available here.

Possibly the 3rd class they were going to add, or the deleted data for Toripon. (Not seen in video because it isn't unlocked, can be seen on screenshot.) 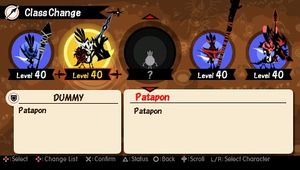 This class is most likely used for the actual Hatapon that appears as your flag-bearer in singleplayer. However, since their equipment and class cannot be changed at all, this class description can't be seen in-game.

Chakapon could have been Robopon or instead the class that was replaced by Cannogabang. By default this class can only equip cannons.

Charipon might have been the original Charibasa. This class can only equip spears by default.

The model, name, description, weapons and birds still exist in the game data, but Toripon has been taken out entirely, including enemy classes Toriton, Torimen, and Akumapon Toripon.

In some files, Patapon 3 is called Labo3. However, since literally everything from Patapon 1 and 2 are in Patapon 3, It's also called Labo and Labo2.