This is a sub-page of Persona 5.

An animation of Crow kicking Joker out of the way. This animation was intended to be used when Crow's Protect skill activates, however, Crow is the only playable Phantom Thief who doesn't learn Protect (except for Joker, for obvious reasons), leaving this animation unused. However, it was put to use in Persona 5 Royal, with it playing its obvious role.

As Crow can never be inflicted with Rattled, his mouse form and corresponding animations go unused.

Crow has a full set of battle order animations, but he only uses three of them in-game as he is only available for one boss fight that uses the mechanic.

Shido has several unused animations located in his event animation folder, named be2106_014.GAP. These unused animations involve him leaning down to face someone, grabbing them and throwing them back, kicking them, and pulling a gun on them. There doesn't seem to be any characters in the game with corresponding animations for being interacted with in this manner, as Shido is the only notable character to have an animation pack labelled be(character number)_014 in their event animation folder. Of note is that some of these animations resemble ones used for the interrogator at the beginning of the game, but it is unlikely they are connected.

Several Personas have battle animations that go unused as they cannot be encountered as enemies through normal means.

While most Personas use their "Low Health" animations for being fused, Alice uses a different animation to the one seen here.

The map for Kamoshida's Palace has an unused duplicate found alongside the objects for Shujin Academy that was likely meant to have been used for the rooftop meetings. This unused duplicate has an animation for being being opened up.

The treadmill seen in Kamoshida's Training Hall of Love has an unused animation where the roller at the end is completely still, but the teapot suspended over it still swings.

While this door and two of its opening animations technically aren't unused, they cannot be seen normally as its in a passageway in the Training Hall of Love that's inaccessible in normal play, and even if the player clips through to reach the door, the door can only be opened during the initial visit. It also has two animations for both doors opening that cannot be viewed in game at all, which were likely meant to be used when Joker kicks the door in while being chased by a guard. 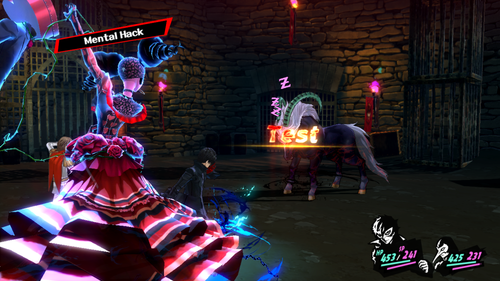 An unused skill effect exists within the game that is used by some unused skills. It causes the word "Test" to appear over the target in fiery letters before dissipating.

The protagonist, Ryuji, Ann, and Morgana have animations for an event that have since dummied out of them coming up with the Phantom Thieves of Hearts moniker. A bit of the scene can be seen in the first trailer of Persona 5. Although Ryuji's animations are later used for other scenes throughout the game, this is the first instance of them internally.

The Phantom Thieves and Shadow Sae have animations for an event cutscene that was meant to happen in Niijima's Palace before the boss fight with Sae, that would have involved the Thieves having to play Poker against her. The corresponding file for this cutscene in the event folder no longer exists, so it cannot be loaded in-game.

Retrieved from "https://tcrf.net/index.php?title=Persona_5/Unused_Animations&oldid=778015"
Categories:
Cleanup > To do
Subpages