Persona 5 is another entry in the line of Persona 4 spin-off games. Don't let the title fool you. Three years later, it got a updated re-release titled Persona 5 Royal. 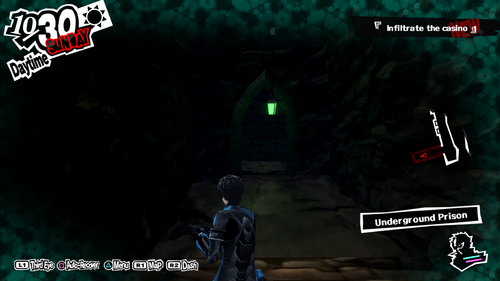 This strange corridor can be found in the dungeon where the player and Ryuji escape from Kamoshida's Palace for the first time after locking up his shadow, and even is marked on the map as an explorable area. Despite this, the player can never normally visit this area as during the escape it is blocked off by guards and Ryuji prevents the player from approaching it, and the dungeon cannot be visited after the player leaves. The lantern model in front of the doorway is unique to this very small part of the dungeons, and collision in the doorway prevents the player from entering. The design of this part of the dungeon seemingly matches up to an unused section of Kamoshida's Palace, likely meaning the doorway was meant to lead there before the larger dungeon area was cut. 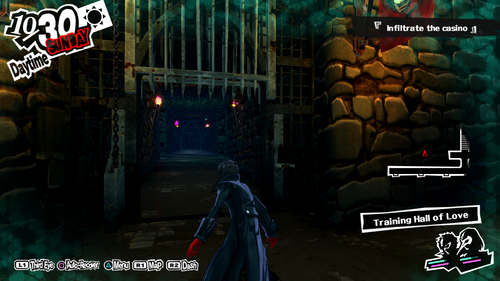 Kamoshida's Training Hall of Love has a portion that cannot be visited normally as a permanently locked gate blocks the path leading to it. The path that can be seen by the player but cannot be visited has two torture gyms that lack NPCs and proper collision, a stack of boxes that is flagged as a climbable object but lacks collision, and between these gyms is a locked gate that contains an area that cannot be seen at all in-game. Of note is that both the torture gyms on this inaccessible path can be checked when finding proof of Kamoshida's abuse of the volleyball team with Ryuji and Morgana, with the empty gym using the same audio and text as the treadmill gym, and the gym with the net using the same audio and text as the cannon gym. Oddly, checking both these gyms will fulfil the requirements for that part of the game, and the torture gyms on the path lack audio and cannot be interacted with if this path is accessed at any other time.

If the path is accessed when the player first enters the Training Hall of Love, Ryuji will prevent the player from opening the gate between the gyms, commenting "Looks like we can't go that way.". The gate can be opened from the other side, however. The wooden beam that runs through the gym next to the climbable boxes causes the player and their party to go into the "crouch walking" animation, and stops just outside of the door to the switch room, likely indicating the player would've entered the unseen path by climbing the boxes and walking along the beam. To the right of the unseen area is a locked door unlike anything else seen in the game, at the top of a short stairway. Curiously, this door is placed close to the area where the player enters the Training Hall of Love. Going to the left leads to a similar door that when opened, leads into a small room containing a stack of boxes and a nonfunctional switch on the wall. If this area is accessed after investigating the Training Hall of Love, the door leading to the switch room will be opened outwards of the room, blocking off the beam path. 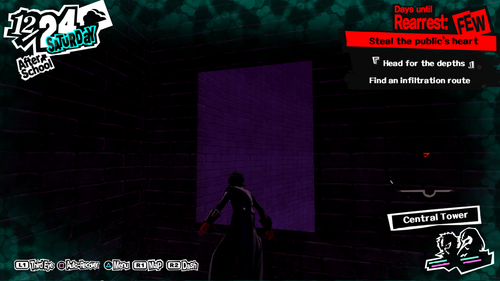 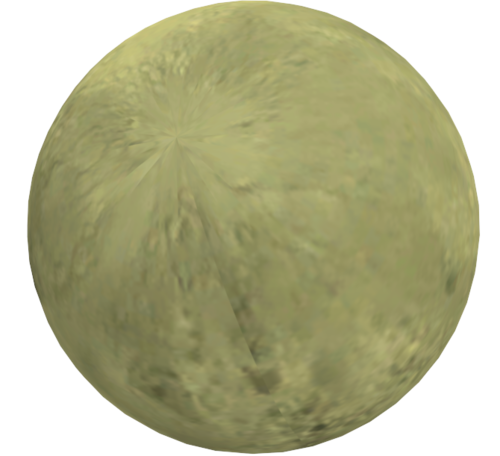 Oddly, the moon is also present in the geometry for the Slave Room, despite not being visible at all on the map. There would also be no way of seeing it normally even if it was visible as the Slave Room has no areas where the player can look outside, and doesn't even have a skybox.

The permanently locked doors seen in the Slave Room actually have rooms modelled behind them even though the doors can never be opened normally. There's also a block of collision in each room that is roughly the same size as the unused bed model.

In the circular part of the Manager's Area, there is a wall behind the treasure pillar between the two counters with two plant containers and a bin awkwardly placed in front of it. The area behind this wall has collision data for a small hallway leading to a doorway. What this hallway once looked like can be seen in a prerendered image for the Manager's Area. 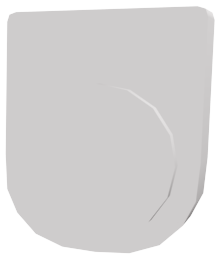 The geometry for the Engine Room of Shido's Palace contains this untextured object in the vicinity where Akechi is fought. It cannot be seen at all in-game due to the player being blocked off from exploring most of the Engine Room normally, and none of the camera angles of the cutscenes before and after the Akechi fight have it in frame. This piece of geometry is not present on the battle field for the Engine Room. 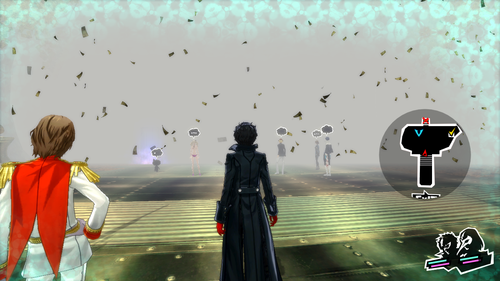 A single unused ENV file for field 158 exists within the game. This ENV file creates a dense fog unlike anything seen in the game. 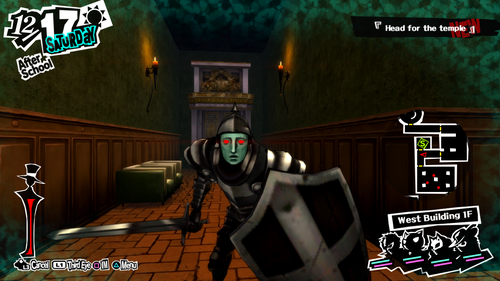 There's unused code for disguising the player as an overworld shadow in the Metaverse. Enabling it turns them into the enemy, allowing to sneak past them. Available actions are walking/running, hitting searchable objects, jumping across gaps and on climbable spaces, and sneak attacking on enemies; attacking them or opening a door removes the disguise. It utilizes the unused Disguise gauge as a meter, located on the bottom left of the HUD, for duration and clicking L3 removes the disguise, although the L3 and duration functions don't work. Removing the disguise, the gauge slowly fills up to charge and disappears after it's maxed.

Although the function is mostly removed in Persona 5 Royal, the Not-Seen-By-Enemy function became used for an accessory named Invisible Veil, a reward item from Jose for completing the Thieves Den.

This command calls an animation of a wanted poster being shown the text GET EXP - EXP Earned with a picture of either Joker or the Phantom Thieves logo being spotlighted with numbers counting up. The command ends with Joker laughing; And it actually does give everyone in the party experience points.

While this code originated from the original PS3 release, the textures needed for the command to execute was found in the Persona 5 Royal remaster.

Several unused skills exist within the game but go unused.

There are several accessory effects defined in the game that are not used in-game, due to the accessories they are attached to being unused.

There is an entry in the Arcana name table for the Aeon Arcana. There is no Confidant who represents the Aeon Arcana in game, and no corresponding tarot card for this Arcana exists. The Aeon Arcana has traditionally appeared in the enhanced editions of games in the Persona series since Persona 3 FES, however, the Aeon Arcana doesn't even see use in Persona 5 Royal, leaving its existence here a mystery.

There are unused flags that when set, allow for the other Phantom Thieves to follow the player around outside of the Metaverse. Only three of these flags can be set at a time. The game will remove the "Morgana in a bag" model from the protagonist if Morgana's follower flag is enabled. The only one to see use in the final game is Ryuji's flag when he follows Joker around during the beginning of Kamoshida's Palace. It is noticeably unfinished, as only Ryuji, Morgana, Ann, Yusuke and Makoto have dialogue for being spoken to, and Goro's idle animation is bugged. The game also does not check to disable these flags when the player enters a Palace or Mementos, meaning that any thieves flagged to follow the player, except for Morgana, will continue to do so in their normal outfits until the player disables them. If the player enters a battle, the models of any Phantom Thieves that have been flagged to follow Joker in the overworld will be distorted for some reason.

Activating any of the out-of-Metaverse follower flags disables skip travel.