Phoenix Wright: Ace Attorney is an enhanced remake of the first game in the Japan-only Gyakuten Saiban ("Turnabout Trial") Game Boy Advance visual novel trilogy. You follow the novice lawyer Phoenix Wright and his quest for great justice, facing Japan's Los Angeles' corrupt law system. Instant success and sequels ensued. It also added an additional chapter which features some new mechanics making use of the DS hardware, such as applying and blowing away fingerprint powder with the touch screen and microphone.

Notably, it also made the game far easier than in the GBA version, where the save file created upon quitting the game was a temporary, single-use one: Screw up once, and you lose the whole case. Realism at its finest. 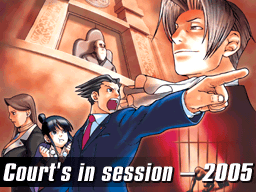 The ending screen for the English demo.

Five placeholder icons for pieces of evidence. Each one says "bloodstain".

An unused sprite of Phoenix "in love" can be found in the game's graphic files. This was most likely meant to be used when Phoenix sees April May on the stand for the first time. However, because Phoenix first meets her during the investigation, using this would not have made sense. It was featured in the gallery in Gyakuten Saiban Jiten, an encyclopedia cartridge bundled with the Japanese release of the fourth game.

Unused sprites of Edgeworth taking damage, analogous to his equivalent in-court animation. It seems that it was simply never put to use, for reasons unknown; it would have fit various situations in the game. This animation is featured in Gyakuten Saiban Jiten, where it is listed as Damage (Unused).

Unused damage sprites for Larry. As with the previous unused animations, this one is also in Gyakuten Saiban Jiten.

The unused music from the original game is also present here. Unlike all the other music, it was not upgraded for the DS. 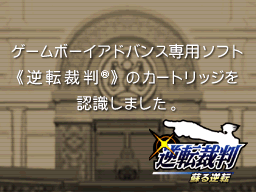 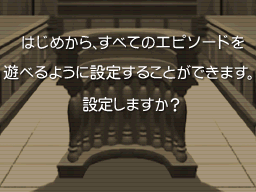 In every version for the game except the North American one, there's a language switch. The Japanese release has a Japanese / English switch. In one of the European releases there is an English / French switch and in the other European release there is a German / Spanish / Italian switch. When the switch is tapped, the "OBJECTION" graphic appears for the corresponding language, as well as the translated audio. Strangely, only the Japanese version has translated logo graphics (The thing on the top screen of the title screen) as all of the other switches keep it the same. In the Japanese demo, there is no switch.

In the first case of the game, one piece of evidence is a passport. In the Japanese version, the passport is red but in the international versions the passport is blue. The text and design was also altered on the international versions. This is because most Japanese passports are colored red while most American passports are colored blue.

Another difference in the first case is when Phoenix explains how the victim didn't bother to change back her clock's time when coming back from her trip, which makes the witness mistake the time. In the Japanese version, the victim took a trip to New York City which makes the witness claim that the time of murder was 2pm. In the international, non-French versions, the victim took a trip to Paris which makes the witness claim the time of the murder was 1pm. The French version says she went to Sydney. This difference also extends to when Phoenix tests out the clock in the courtroom. In the Japanese version, the clock claims that it's 9:25am. In the international versions, the clock claims that it's 8:25am.