Phoenix Wright's obscure mobile debut, released in an episodic format with the first episode acting as a free demo and the rest of the game having to be purchased from the now defunct Capcom World service. Naturally, some sacrifices were made to make the game work within the limitations of the platform. Noticeably the character sprites aren't animated, but they still managed to include the classic sound bites and vibrating objections. Unfortunately, everything past the first episode seems to have been lost to time. 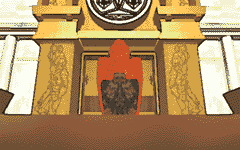 The Judge's seat is never seen as he never leaves from it.

A Nintendo DS logo that is unused in certain versions of the game, meant to appear together with a bit of unused text below.

A bit of unused text found at the end of a file simply named l. The tutorial text most likely goes unused since the information is simply included in the script.