Pikmin is the story of Captain Olimar, an explorer who crash lands on an "unknown planet" (that totally doesn't resemble Earth in any way). There, he finds some indigenous creatures that are eager to help him recover his ship parts. However, these cute animal-plant hybrids are on the bottom of the food chain, and there are larger creatures waiting to eat them. The Pikmin will have to work as a team with Olimar to take down these (comparatively) gigantic beasts! Can Olimar recover at least 25 required ship parts in just 30 days? Canonically, yes.

This article was brought to you by Microsoft Windows™.

A simple debug menu that tests some of the game's features. Each option has a value that can be changed with the analog stick, and when the A button is pressed, a menu or screen appears. The menu is in Japanese in all releases. The options to the following, from top to bottom:

To access this, use one of the codes below, then hold the D-pad right when loading a menu. You will have to restart the game to leave the debug menu.

Using one of the codes below, you can enable on-screen debug info.

A model viewer for a small selection of entities in the game, including a couple unused (or broken) ones.

With the code below enabled, hold the D-pad right while a new menu is being loaded (for instance, in the Nintendo logo or from the main menu to the save selection), and the viewer will load instead. Note that loading the model viewer at the Nintendo logo will make the animations play without sound.

Many unused areas remain on the game disc. Some are test maps, while others were used in prerelease trailers. Only their models and collision data remain, so in order to access them in-game, they must replace an existing level. The objects, music, and other properties will belong to the replaced level.

This area resembles both The Impact Site and The Forest of Hope. It was probably used for an E3 conference.

A small forest area with an inaccessible wooden bridge near the edge of the map that may have been intended for the cut 2-player mode based on the files.

This area appeared in a commercial for the game. It looks like Distant Spring with various unused textures. There are no borders, so be careful not to walk off the edge.

Another test map with many slopes and test textures, including a Helicopter parking symbol on top of a tree stump.

A large test map featuring many typical test map elements such as slopes and stairs of varying heights. Also features more specific testing elements, like a platform filled with holes for Pikmin to fall into and winding airborne paths.

Two maps meant for the model viewer and map collision codes and their affiliated flags (step sound, if Pikmin can be planted there, etc.) respectively.

Believed to be a prototype version of The Impact Site, due to both looking quite similar and even sharing the paths Pikmin use to carry things to their Onions. The slopes have odd textures.

An early pellet model. There are also duplicates for this model. 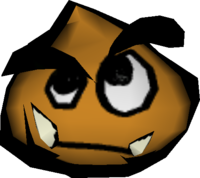 A goofy looking model of a Goomba from the Mario franchise that looks a bit like the unused Kug enemy from Super Mario Sunshine. "Kuribo" is the Japanese name for Goomba. 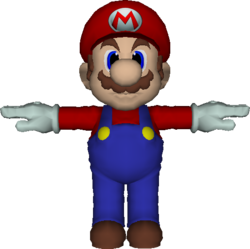 A very large model of Mario.

A door and key model are located in the same folder. They can only be loaded without mods in the Windows Debug version. The door has a small and big version.

The door and key are still functional as well. Keys can be picked up by walking into them, and will disappear when collected. The keys can then be used on the door by simply walking in front of them. The small door will lock Olimar in place if the player has a key, but the big door will play an animation where it shrinks vertically until it disappears into the ground. The game will keep track of how many keys you have, so you will have to pick up another one of you want to open another door.

A marker most likely used to help test the mechanics of the Pikmin. The X shows where a Pikmin will land when thrown, the inner circle may be used to show how close a Pikmin must be to something to grab/attack it, and the outer circle shows the range of Olimar's whistle. The X and inner circle will change color depending on which Pikmin is currently closest to Olimar's active group. 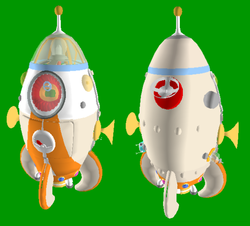 Folders "demo76" and "demo77", found in dataDir/cinemas, contain identical copies of a prototype version of the S.S. Dolphin's cutscene model. Demo76 and demo77 do not use these, and instead borrow from demo01's resources. 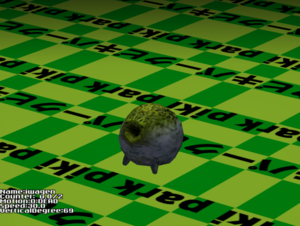 In some test levels such as testmap, there is an unused enemy called 'iwagen'. It appears to be a rock spitting vase, shooting small boulders similarly to the armored cannon beetle. It has no health counter and its only animation is for shooting. The name is a combination of "iwa" (meaning "rock") and "gen" (short for "generator"). 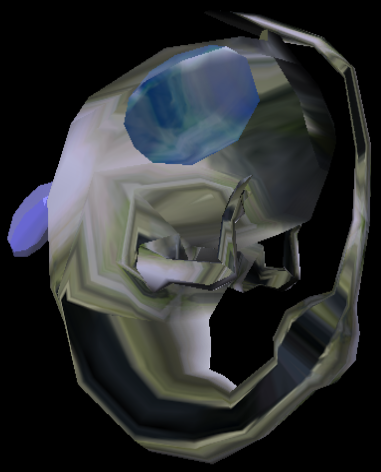 Usuba (ウスバ), short for Antlion (ウスバカゲロウ), would have been a flying antlion enemy based on a debug string stating "Usuba is flying." and its only animation file being named "fly.dca". Attempting to spawn Usuba in any manner crashes the game, and it doesn't show up in the animation test, but the model can be swapped with any object in-game. Usuba is likely from a similar stage of development as Iwagen, as its parameter file is one of only three that still use version 0823 (8). As a side note, there is a completely unused parameter version that is older than 0823 (8) called 0615 (7), giving us a time-frame for when Usuba was last developed.

The parameters themselves suggest Usuba was dropped fairly late into its development, showing that it would have had 5000 HP (one of the highest amounts in the game) and may have spawned Smoky Proggs, but it's possible that the IDs for this shifted during development, so this can't be confirmed.

A video of the creature's flying animation can be seen here. 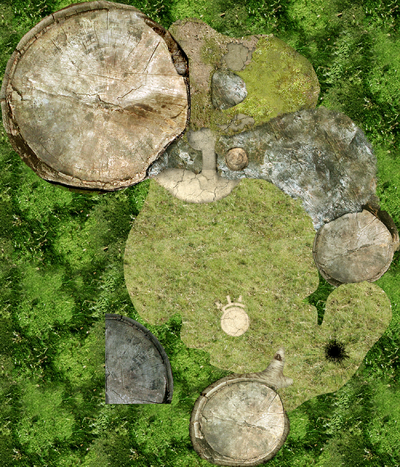 Textures for an early map of The Impact Site are loaded in memory when on said area. By stitching them together, it's possible to see what the area looked like in development. While it shares the same general layout of the final map, there are also several big differences.

Textures for all maturities of Blue and Red Pikmin holding bomb-rocks, something only Yellow Pikmin could do in the final game. 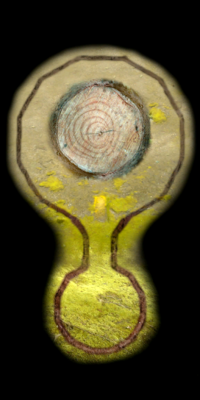 play_4 has a large textured tree stump, but most of its texture goes unmapped. The full thing reveals an entire arena around the stump, and a corridor connecting to another room.

The "2d_data" folder in the dataDir directory contains a subfolder named "karltexs", which contains the following .txe and .bti images.

"red.txe" appears to be damaged, but removing its alpha channels restores it.

There is an unused GameCube BIOS banner in the files that features the same Pikmin renders seen in Challenge Mode. 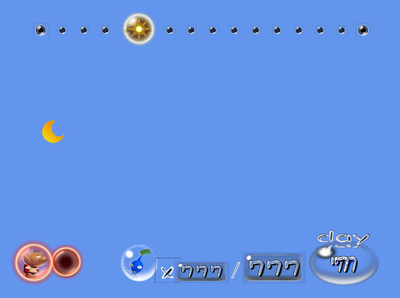 Found in the game's screen files is Play_07.blo, which is the HUD seen in many early screenshots. This version of the HUD has all the elements in one .blo while the final version has the health meter and clock in their own .blo. The main differences in this include the day counter in place of the total Pikmin counter and the unused moon texture being present on the screen, implying that there may have been a night clock.

The Japanese release has an early demo movie in dataDir/SndData of all places. It has several small differences from the final demo movie.

There are some unused files in the SndData folder named after some of the unused levels.

A jingle located in piki.stx. This likely was the original jingle for meeting up with the Pikmin.

"I have finally recovered all 30 parts of my ship and succeeded in escaping this strange world! To think, all the times I almost gave up hope... On the now distant surface, the brave Pikmin that aided me in my perilous quest are running about as if I had never come. Will our paths ever cross again...?

At any rate, I can finally return to my home world. I feel relief, of course, but also a certain sadness. I can't exactly say... Perhaps, I am just thinking of the long journey through space that still lies before me. This time, I shall set my ship's navigation system so that I encounter no more meteors, and I shall enjoy a long relaxing sleep. I shan't forget you, Pikmin!"

A log showing Olimar's relief for collecting every ship part and escaping the planet. This log is never recorded because the game ends immediately after collecting all 30 pieces, and the voyage log can't be read after that.

How do these Pikmin choose a route to return to their Onions? If an obstacle blocks their path, they just seem to carry their load in a tight circle... It is obvious their intelligence has limits. It seems I must order them to tear down the walls to open the way.

A slightly different version of the log talking about the Pikmin's pathing.

May have been used if you failed to get enough ship parts by day 30, but since the bad ending just shows Olimar failing to blast off), this text is never shown.

Other than these, there are a few files in Japanese, that discuss some pretty standard stuff, that shouldn't warrant a voyage log to begin with. There is also a second page file for some of the entries. The translators were likely able to fit all the info in one page, making the additional entries pointless. Some entries have a small function that checks the number of days. If it's just 1, it displays "day" (singular). If not, "days" (plural). Though in some of those cases, the check is unused, as some of the entries couldn't possibly happen on the first day.

"My long adventure has finally come to its conclusion. I must part with these Pikmin who have helped me in my need. At last comes the time when I depart to once again travel the depths of space."

Similarly to the unused voyage log entry, this message is never shown. Once the final piece (the piggy bank) is collected, Olimar comments about it and states that he must leave the planet. After that, the ending cutscenes roll and Olimar never monologs in-game again.

One of the monologs also has a plural/singular check. When Olimar checks the ship's status, it shows how many pieces have been gathered. However, there are two messages like this. One that is only said on the first day (and doesn't mention healing the suit), and another on the following days (and mentions the suit being healed). In the first day, when you collect the first piece, the day ends immediately. This means that the only way to view that "first day" message is when the ship has 0 parts. As such, the game could never write "part" in singular.

Finally, there are also some entries in Japanese that talk about miscellaneous stuff.

This game has a lot of debugging text and unused content just outside of the camera's frame, in almost every screen.

There are other off-camera details, but these ones aren't exactly unused, just misplaced or weird.

This file contains information about the build process, including function names, source code files, and more.

There are at least two Japanese versions of the game: v1.01, and v1.02. The following differences between them are known: