From The Cutting Room Floor
(Redirected from Plants vs. Zombies: Garden Warfare 2 (Windows))
Jump to navigation Jump to search

Plants vs. Zombies: Garden Warfare 2 is the second Plants vs. Zombies shooter game in the Garden Warfare spin-off series. This time, the zombies finally took over an acre-sized neighborhood named Suburbia and transformed it to a high-tech utopia: Zomburbia! Now it's the plants' turn to reclaim it. Also, plants and zombies battling in SPAAAAACCCCEEEE!

Popcap and EA rushed this game, so there's a lot of unused and unfinished content. 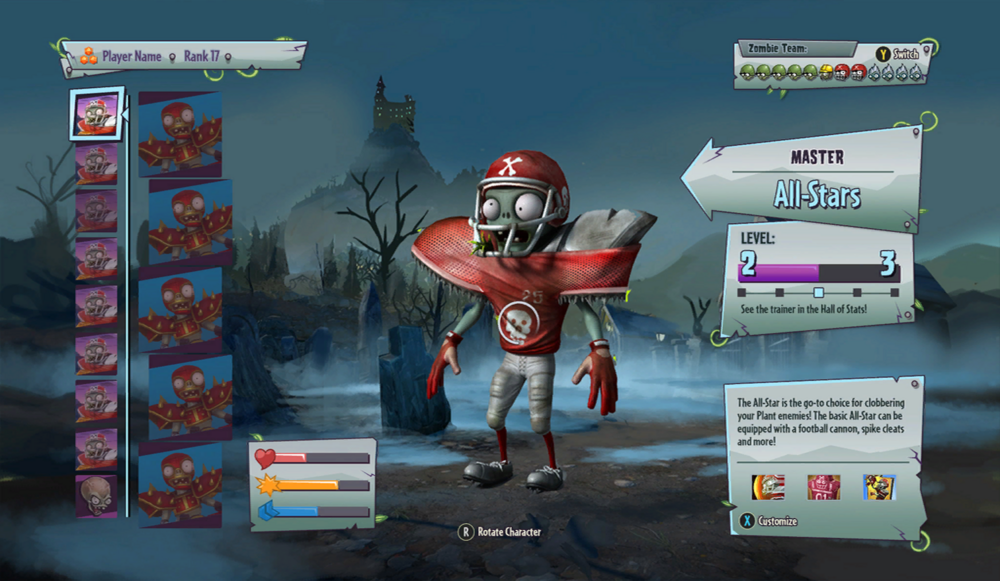 Found in the files of the game is a screenshot of an early build of the game. From here, several differences can be seen.

The All-Star is the go-to choice for clobbering your Plant enemies! The basic All-Star can be equipped with a football cannon, spike cleats, and more! 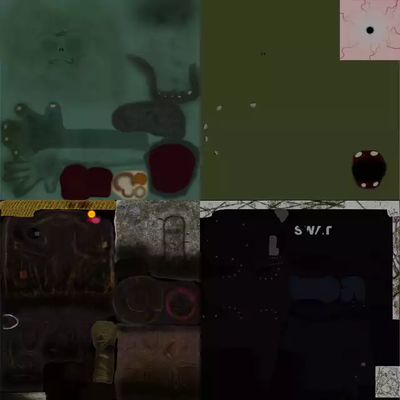 In the textures of the Gravedigger (who, fun fact, is an unused class turned unused boss from Garden Warfare 1) found in one of the test tubes in the Z-Tech Factories map, textures for an unknown SWAT Zombie can be seen. Given how in the files of Garden Warfare 1, references to a scrapped SWAT Zombie class can be seen, this may suggest the textures for the Gravedigger cameo were directly taken from the scrapped textures back when he was going to appear in the first game!

Giga Gargantuar is a very unfinished class most likely used for testing. It uses foot soldiers' abilities, but has a different primary.

The Laser Goats are an unfinished goat class that was going to appear in the scrapped Mystery Portal mode "Team Vanquish Goats". They have the physics of a regular goat and the ability to double jump. The Plant version is called Laser Mohawk and has green armor, while the Zombie version is called Laser Horns and has purple armor. 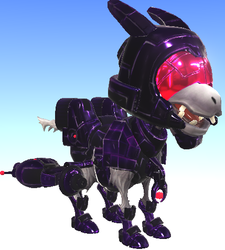 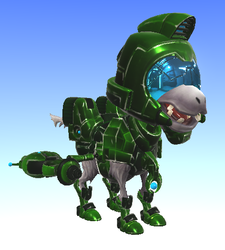 Imitator is an unused Boss hunt. Its AI is unfinished and buggy. It will roam the map attacking zombies and will randomly burrow and spawn multiple zombies; when that happens, it will burrow into the ground and summon an imitated Zen Sensei, Disco Zombie, Gargantuar, or Baron von Bats. Once the imitated boss is vanquished, Imitator will pop back up to continue fighting. It has tags for boss hunt events, similarly to other boss hunts. According to Jeff Shaw (the Lead Level Designer on Plants Vs Zombies: Battle For Neighborville, Plants Vs Zombies Garden Warfare 1 and 2, and Star Wars: Battlefront 2) on Twitter, Imitator was cut due to how quickly expensive it became while building it.

Super Chili Bean is an unused Boss Hunt version of Super Bean. All of its attacks are much stronger, and it has a 500-health Shield. Super Chili Bean also has a unique Overbean mode. Instead of constantly firing a single eye laser, it rapidly fires two devastating eye lasers at the Zombies. These lasers are strong enough to kill any playable Zombie in less than two seconds.

Renegade Imp is an unfinished version of Imp; however, it would not have been a variant. Recently, multiple files were found that refer to it being a Backyard-related enemy, but it also has files referring to it as a boss hunt, so its true original purpose is seemingly unknown. It uses a duplicated version of the Imp Blasters with messed-up sound effects, and will summon its Mech repeatedly. This Mech is very powerful, and like Super Chili Bean, it can easily kill any playable Plant. The Mech has a stronger version of Chain Laser, a Warp, a stronger version of Missile Madness, Z-Mech's Foot Stomp, an airstrike of Stink Clouds, and multiple Gravity Grenades. It would have been lured by “Cyber Jerky”, and strings for this still exist, with one of them saying “Cyber Jerky becomes lean”.

Zombot was planned to appear in Garden Ops as a boss; it was originally supposed to appear in the first Garden Warfare game, as seen in E3 2013 footage. If spawned, the Zombot is stuck in a glitched pose below the ground. A Zombot does occasionally walk around and attacks players in the Z-Tech Factories map, but isn't considered a boss. By replacing the Robo-Zombie's model, it's mesh can be seen well, though.

An unused Beet boss that was going to have its own Boss Hunt. It has bait data and strings in the launch build of the game.

A boss that seemingly was scrapped very early in development. It has next to no data in the final build, but in the first version of the game it has a good bit of data left. There are bait strings, bait (which would have been a “balanced breakfast”), wave data (which, when activated, spawns default Citrons), and boss spawn data (which, when activated, spawns a Torchwood). Although it was scrapped, it did make a appearance in the black hoarse comics.

Another Boss Hunt boss that was likely scrapped early on. The only data it has is some text, two icons, animation/attack names, and some spawndata. Also, the player was going to lure it in with... swimming trunks.

While the Sasquatch boss was fought occasionally via temporary Boss Hunt events, it would seem he would originally be fought in Story Mode. His bait would've originally been a Soup Can, which has both an icon and model leftover in earlier versions of the game. The boss itself is fairly similar to the boss hunt found in the final game, though it seems the Sasquatch summoned healing burgers more often, and dug underground slightly more often as well, usually when he is attacked. 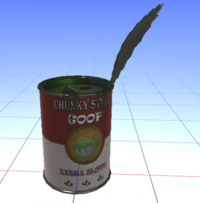 Although the Fire Pea does appear in the final game as an NPC, it never appears as a pottable plant. It's similar to the Pea Cannon, but shoots fire projectiles instead.

Likewise, the Ice Pea also appears in game as an NPC, appearing in the Zomburger Delivery Challenges, but is not summonable as a potted plant. It fires frozen peas which slow down and eventually freeze zombies.

The Magnifying Grass would've been used to lower the zombies' attack.

The Power Lily would've increased the damage output of nearby plants.

Also similar to the Fire Pea and Ice Pea, but it would shoot out two projectiles. This version of the potted plant would later return in Battle for Neighborville... but as a regular Peashooter. 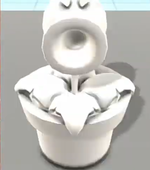 An unused, textureless Pea-Cannon-like plant. It is unknown what it does, though it could be related to the Food Fight event, which usually happens around Thanksgiving.

An unused plant summonable and zombie enemy known as the Fence Weed. It would've most likely act like a Coffin Zombie. It was most likely replaced with the Vase Weed seen in the final game. 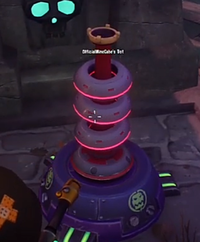 An unused Bot which would've boosted nearby zombies' damage output. It has animations, an icon, and a model. 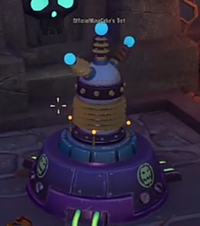 GW2 was going to let the user use the Mantle rendering engine like you could in GW1, but this was cut due to time constraints. It can be re-enabled using mods.

Like GW1, GW2 has full support for customizable Field of View; however, also like GW1, it goes unused, and can only be changed by editing the prof_save file.

An unused animation of Super Brainz charging up in some way, flying in the air a bit. Likely a cut gesture.

An unused idle animation for Crazy Dave. Maybe Crazy Dave was the one to give out quests instead of Dave-bot 3000?

By clipping out of bounds with All-Star in earlier versions of the game and heading above the sewers, the player can talk to an unused NPC known as 'Branching Zomboss.' Attempting to interact with Branching Zomboss would give the dialogue "I got no Quests!" After responding with the only available option, being "What?", the dialogue "Come Back Later..." would be given, with both the response options of "YES" and "NO" ending the dialogue. In an unknown update, all references to this character were removed.

Unused music that would've most likely played in Story Mode can be found in the games files. It is unknown where these would've played

These unused tracks would've played when the Zombies are taking over a zone in the Great White North map. In the final game, only one song is used.

These unused songs, like the unused Great White North tracks, would've played when the Zombies are taking over a zone in the Seeds of Time map. In the final game, only one song is used.

Like in the first Garden Warfare, each Super Boss Wave was originally going to have it's own music track, though was cut for unknown reasons. These tracks do play in Battle for Neighborville however, during a boss's Super Wave.

This would've played for the Sunflower Queen's Super Boss Wave

This would've been for the Giga Torchwood's Super Boss Wave

This would've been for Zen Sensei's Super Boss Wave

This ominous song goes completely unused in the final game. It is unknown where this would've played.

There is a unused crazy setting referred to as "Tiny Mode"; when activated, it makes the character about 50% smaller. It is fully functional and was likely scrapped last-minute.

There is a unused crazy setting referred to as “ink painting”; when activated, it makes everything black and white with thick outlines, and also makes particles invisible.

Tale of the Taco 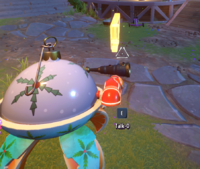 The Tale of the Taco event, which was leading up to the reveal of Battle for Neighborville, has several scrapped features to it. For starters, in the player's backyard, they could interact with a telescope in which they could've interacted with a character named Talk-o, which is a giant taco on top of the Town Center. The taco was referred to as "the taco of your dreams." After the dialogue with the taco, the player would see a screen that would have shown rewards. It is presumed that these rewards would have been for Plants vs. Zombies: Battle for Neighborville, as the name for that game was also found within the UI setups for the reward screen.

Another thing left unused was a Propulsive Salsa mode. This would've been similar to Team Vanquish, but there are hidden salsa power-ups around the maps, and collecting them would give the player buffs, such as low-gravity. This is similar to a cut mode from Garden Warfare 1 called Super Team Vanquish. For unknown reasons, this event was scrapped and scaled back. 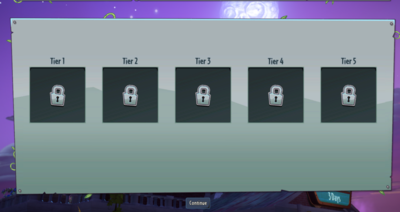 Several of the Story Mode missions had their names changed during development.

Additionally, each class was going to have 5 missions each, but the names of them have yet to be discovered

Via the use of a now patched glitch, one can use the Garlic Drone to fly themselves into the changing booth area. From here, they can find a wizard hat on top of a table, which cannot be seen by any other means due to it being directly behind the camera. The top of the closet seen near the left also has a sort of top hat, which goes higher than normally viewable. 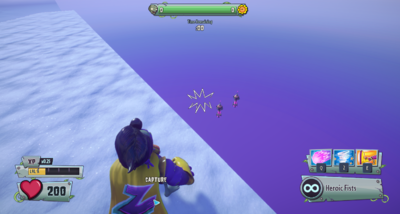 In the Great White North stage, two out-of-bounds gravestones can be seen off the map.

In the Wall-Nut Hills stage, near each base, the Defender Bot that Engineers can build are actually leftover Zombot Turrets from Garden Warfare 1! However, when it's upgraded to tier 2, becomes a broken and glitch-prone tier 3 bot.

In every scene in which the Van is flying, looking closely into the window can show that it is none other than Crazy Dave piloting it! This is hard to see, however.

In the Zombopolis map, the trains found in the junkyard travel much further out of bounds than one would expect.