Plants vs. Zombies on your mobile device! Now with ads!

A Perl script for changing version numbers exists in bumpver.pl.

Unused text for a trial version of "ZomBotany." This may refer to the mini-game of the same name, but it may also be leftover text from a prototype of the PC version, as "ZomBotany" was another name considered for the game. However, this text is not present in the PC version or its known prototypes. First found in paid iPhone version 1.2, even though the ZomBotany mini-game wasn't added into the game until version 1.6.

Text relating to in-app purchases for game packs. In the final game, game packs cost in-game coins instead of real money. Seems to be unfinished as it has several typos. First found in paid iPhone version 1.6, and removed in version 1.8.

In the final game, you cannot ever purchase individual mini-games or 8 mini-games at once, only three at a time. First found in paid iPhone version 1.6.

Something about buying mini-games in bulk. Again, you can only ever buy three at a time in the final game. First found in paid iPhone version 1.6.

No idea what this is. Found in an unused early LawnStrings.txt from paid iPhone version 1.7.

Unused dialogue from Crazy Dave about a Golden Glove that can move plants around the lawn. First found in paid iPad version 1.9.5, but can also be found in every free iPad version. This text is not present at all in any iPhone or Android versions.

Early name and description for Sol Invictus, found in paid iPhone version 1.6. Sol Invictus was finalized and added in version 1.8, along with Last Stand itself.

In the final game, the shovel can be used instantly all the time.

This text was probably used in I, Zombie puzzles before Crazy Dave's proper introductions were implemented.

Survival mode is never unlocked from a present item, so this text is not used.

This message was used in the original version, but became unused in GOTY version. In GOTY version, if you beat the final boss, the "achievements unlocked" screen will appear, but this message is not displayed.

Not sure if this is unused, but it looks like a placeholder.

In the final game, you unlock puzzle mode which comes with I, Zombie and Vasebreaker.

Not sure if these are unused either.

An unused level for Vasebreaker.

An unused icon for the Wall-nut Bowling 2 mini-game. In the final game it just uses the same icon as the first Wall-nut Bowling. Found only in paid iPad versions 1.0-1.0.5 before being removed.

An icon for the scrapped mini-game Bungee Blitz. The icon was redone from the PC version even though the mini-game remains unused. Found in paid iPhone version 1.6. It was eventually removed.

Seed packets for Giant Wall-nut from Wall-nut Bowling 2 and the backwards Repeater from Vasebreaker have existed since the first versions of the game, however by the time these modes were added, the seed packets had been redone at a higher resolution, leaving the original versions unused.

In paid iPhone version 1.6, the plants and zombies sprite atlas contains various zombie heads with red and green eyes. The basic zombie heads were eventually removed, but the green-eyed Gargantuar remains in the game to this day, albeit improperly upscaled. They may be related to the Giga-gargantuars which have red eyes, however the Giga-gargantuar sprites were also unused in this version.

A strange unused button whose purpose is unknown. It matches the shape of the Pool button from Quick Play.

In paid iPad versions 1.9.5 and up, as well as all free iPad versions, an unused sun bank sprite can be found. It resembles the one used on the iPhone and Android versions, but it has been redrawn at twice the scale. 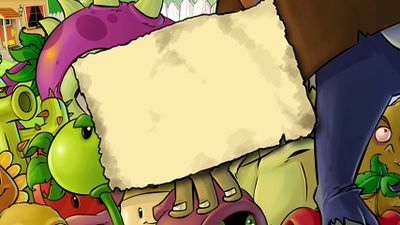 A screen meant to advertise the full version of the game, found in early paid Android versions. Doesn't seem to have ever been used, as there was never a trial version available for Android. 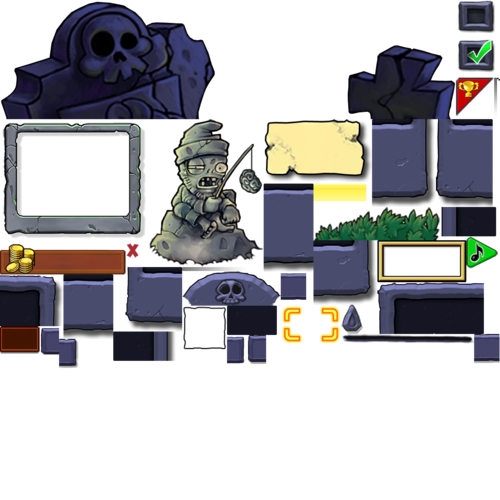 Some of the old main menu graphics from free versions 1.0-1.9.13 still remain in with the current version of the game's files. 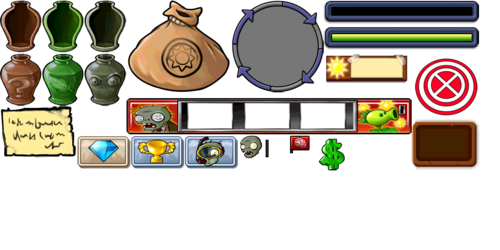 The unused zombie vase from the PC version still remains in the game's files in all versions.

All of the scrapped mini-games from the PC version are still in the mobile versions and can be accessed via hacking. The only exceptions are High Gravity and Grave Danger, which are absent from the iPad versions as of paid version 1.9.2 due to their IDs being overwritten by the Zombiquarium and Vase Breaker mini-games.

Only half of the levels from Adventure mode can be accessed through Quick Play mode. Despite this, every single Adventure level has a Quick Play version, leaving half of them unused. 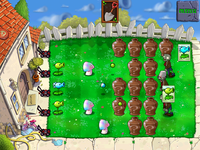 In later paid iPad versions, the unused Quick Play version of Level 4-5 (Vasebreaker) is incorrectly set during the day instead of at night. This causes the Hypno-shrooms to be unusable as they fall asleep.

In very early paid versions, most of the side content from the original PC version was not available. However, almost all of it was actually in the game already in a broken state and could be accessed via hacking. Gradually all of this content was fixed up for mobile and made officially available.

The Survival Hard levels function exactly like the other versions except the waves are broken causing the game to skip 2 waves.

Leftover from the PC versions. It functions almost the same as PC except the same issue from Survival Hard is still there.

An achievement from the paid versions. It was removed in the iPhone and Android free versions for an unknown reason, but can still be found in the iPad free version.

An achievement from the paid iPad version. It was removed in the free iPad version for an unknown reason.

Found only in versions 1.0 and 1.0.1 of the paid iPad version. Replaced in version 1.0.2 with Disco is Undead due to the new design for the Dancing Zombie.

Found in paid iPad versions 1.0-1.0.5. Replaced by Peeking Express in later versions, which is similar but also records the player's best time.

In the free versions, the credits was changed from a video of Zombies on Your Lawn to a generic scrolling credits screen, with Choose Your Seeds playing when clicked on from Roll Credits. Related code as well as the video file were also removed. Despite this, the final note still mentions the music video.

The title/loading screen was changed at some point. Higher quality visuals and wider art aside, the appearances of the zombies were completely changed to be more in-line with how the appear in-game. Additionally, the Basic Zombies in the background were replaced with the Football and Newspaper Zombies.

The original iOS/Android versions of the game's main menu used graphics from the Xbox 360/PS3 port of the game, which was replaced for a more modern and sleeker design in both the paid and free iPad versions, and later the iPhone and Android free versions as well. In the updated main menu in the free version, the stone gnome zombie was removed in favor of the zombie near the main grave, and the "Bonus Games" grave.