The Pocky and Rocky series gets a new entry after lying dormant for over 7 years. 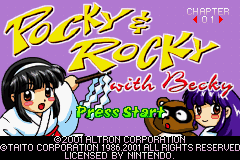 At the title screen, press Up, A, Left, B, Down, L, Right, R, Select. The chapter select will be added to the top right corner of the screen.

The Japanese title screen is rather basic, featuring the logo in a simple border on a black background. The international versions feature art of the titular characters on a soothing lavender background.

The title screen change also necessitated the relocation of the chapter select.