Pokémon: Let's Go, Pikachu! and Let's Go, Eevee! are reimagined versions of the main Generation I titles, most obviously Yellow, which add the Alolan forms from Generation VII, Pokémon following you in the overworld, and the mysterious newly-introduced Meltan and Melmetal.

As the name implies, the games are based heavily on Pokémon GO in an effort to draw in new players, including a full rework of the wild Pokémon battle system. Did this result in a streamlined experience that still captures what makes Pokémon fun to play, or a watered-down "casual" experience that's still too complicated for new fans? Per usual, nobody can decide. 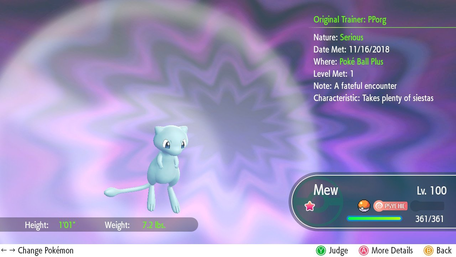 Mew, being an Event Pokémon, is Shiny-locked, though the Shiny version exists in the game's code.

The Partner Pikachu and Partner Eevee technically also qualify as alternate forms that are Shiny-locked (they use different models and textures in-game compared to regular Pikachu and Eevee). If hacked in, their Shiny textures are just identical to their non-Shiny textures.

The game contains a lot of unused items, the majority being leftovers from previous entries (such as the TMs and HMs, which are all from Generation VI). Most of them use a question mark graphic as a placeholder; the only ones that retain their intended icons are the first set of unused Balls (from Safari Ball to Cherish Ball in the list).

All but one of the unused Balls will display as a regular Ball if a Pokémon is sent out from one. The exception is the Safari Ball, which will instead cause the game to become unresponsive and eventually crash.

Despite only a limited selection of moves being available in-game, the rest of the existing moves in the series up to this point can all be found among the move data in the game's files. Interestingly, hacking any of the unused moves into a Pokémon's moveset causes it to display as an Egg, which can't battle and whose party sprite and model are also otherwise unused.

Unused text messages related to Wonder Cards, with only the ones at offsets 00, 04 (Mythical), and 20 (Birthday) being used by currently-released gifts. Interestingly, ofset 09 mentions a "Hidden Ability Gift" even though Abilities don't exist in these games, despite being present in the data for every available Pokémon.

Despite only the original 151 Pokémon (plus Meltan and Melmetal) being present, the game's files contain the names, typing data, and species names for the rest of the Pokédex. For some reason, their models and textures are all stubbed out with those of Marowak specifically.

While the title screen of the Japanese version uses a button prompt in English, which says "PUSH A BUTTON" in capital letters, it is actually different from the one used in the international version, which says "Press the A button". It’s possible that this change was made to prevent people reading it as "Push a(ny) button" instead of "Push (the) A button." The font used is also more squarish than the international one.