Pokémon Black 2 and White 2 are, as you might have surmised, the sequels to Pokémon Black and White, set two years after the first Generation V pair. These games feature a new, less fashion-challenged Team Plasma, a pair of new forms for Kyurem that make it suck much less, and Colress' kick-ass battle theme.

Every time Thundurus or Tornadus appears, a rainstorm starts. Since these Pokémon can't be found in Black 2 and White 2, these two weather effects go unused. They use the IDs 0x6 and 0x7 respectively.

The graphics for the unused sound test and the text input screens from Pokémon Black and White are still present within the game's files. 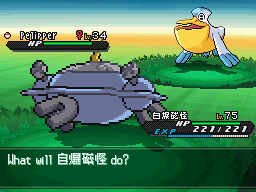 Like the previous game, a small kanji font exists for names. It is technically used during battles if the player's name contains kanji, but due to lack of kanji input ability, it goes unused during normal gameplay.

There are several placeholder/box graphics and unused alternate palettes for props, actors, and movie cutscenes in Pokéstar Studios. All of the unused prop graphics are fully assembled and are not animated.

Three cutscene placeholder graphics. The first one is of the male player character in his normal clothing, which is never seen in any movies. The other two are negative versions of the male and female character's cutscene portraits.

A "shiny" variant of the normal Prop sprite. Like several unused "shiny" sprites in Pokéstar Studios, it's just a silhouette.

Two placeholder graphics for the UFO. The silhouette is the shiny variant.

Very early graphics for the White Door. The silhouette is the shiny variant.

Two placeholder graphics for the Black Door. The silhouette is the shiny variant.

Two placeholder graphics for the Mecha–Tyranitar (MT). The silhouette is the shiny variant.

Two placeholder graphics for the Mecha–Tyranitar 2 (MT2). The silhouette is the shiny variant.

Two placeholder graphics for the Humanoid. The silhouette is the shiny variant.

Two very early placeholder graphics for the Monster boss. The silhouette is the shiny variant. This one looks extremely similar to Zero of the Kirby series.

Two very early placeholder graphics for the Transport. The silhouette is the shiny variant.

There are two blank graphics for the Majin boss.

Two placeholder graphics for the first encounter with Monica.

Two placeholder graphics for the second encounter with Monica.

Two placeholder graphics for the Blackbelt. The silhouette is the shiny variant.

Two placeholder graphics for Brycen-Man. These use the Victini sprite with a different palette. The silhouette is the shiny variant.

As with its predecessor, there are multiple series of ascending notes in the music files - this was likely done to test the soundbank, as it is a common method of doing so.

The first part of Black and White's opening segment where N is crowned King of Team Plasma, labelled SEQ_BGM_TITLE.

The title screen music from Black and White, labelled SEQ_BGM_POKEMON_THEME.

Larvesta and Volcarona can now be found with their hidden Ability in the Generation VI games.

The Unova and Johto starters, along with the Legendary birds and golems, were distributed with their hidden Abilities in event distributions in Generation VI.

In the Generation VII games, Raikou, Entei, and Suicune's Hidden Abilities were all changed to Inner Focus, now obtainable by transferring from Virtual Console Gold, Silver, or Crystal to Sun, Moon, Ultra Sun, or Ultra Moon.

Several lines of unused weather effect text appear within the internal data of Black, White, Black 2, and White 2. Notably, quotes for fog exist within the text, implying that fog functionality was planned to exist in Black and White. While the final game does include foggy locations, such as Route 15, the fog weather condition does not appear in battles.

This can be forced as NPC text in Nimbasa City's musical theater.

There are unused strings of text for inquiring to the player character's mother about their current location via the Xtransceiver. Most are locations where the Xtransceiver cannot be used, though one exists for Route 10 (see its own section).

There are a few tiny corners of in-game locations that exist, but can't be visited without cheating.

Reversal Mountain's donut-type main chamber actually does have an interior section! It's this tiny cavern here - you can even see the stairs in the corner in-game, from one of the offshoots of the main path.

...Seeing it is all you're going to do, though. You can't actually reach it - it doesn't connect to the main path, and the stairs don't go anywhere. It's just...there. The White 2 version of Reversal Mountain (the one shown on the picture is the Black 2 version) also has a similar area at a different location.

This may well be the single least exciting unused room ever to exist, by the way.

On Route 21, the area above the Seaside Cave can be seen, but can't be accessed normally. If hacking is used to move around this area, an unused warp to the Plasma Frigate can be found. Because the Frigate is parked outside of the Seaside Cave during the story, it stands to reason that this was previously the main point of entry into the Frigate, but was moved during development of the area.

Unused dialogue exists for the protagonists of the previous games to use in the Pokémon World Tournament.

Through a specific parameter in a PWT file, you can face the female protagonist, Hilda, as one of your opponents. She doesn't seem to have any Pokémon assigned to her, and the game does not load the unused dialogue strings as default text. Her intro text is the exact same used for Red. ("It's the living legend Red! Is that strength for real?!") before you fight, she also uses Red's speech ("...") Her only programmed line is for when she loses a battle, which is simply a copy of Red's defeated line ("...!").

Oddly, the male protagonist, Hilbert, is absent. He actually has dialogue for the PWT, though mostly it's just recycled from Hilda's dialogue.

There are several variations of this line.

Fighting Cheren in the PWT

Again, through editing the PWT files and then importing them as download tournaments, you're also able to add Cheren. He has two values that you can select when you customize trainers for custom PWTs. One value is simply named "Rival" and the other is called "Cheren".

Upon entering the PWT with these two trainers, they both use Cheren's sprites.

"Rival" and "Cheren" use most of the same text, though they are in different addresses. 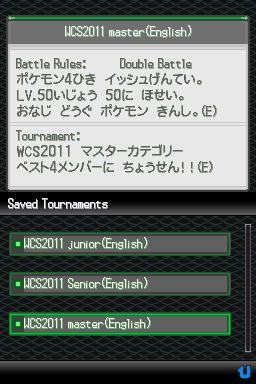 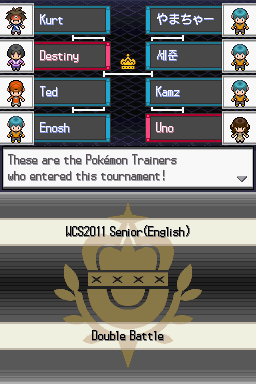 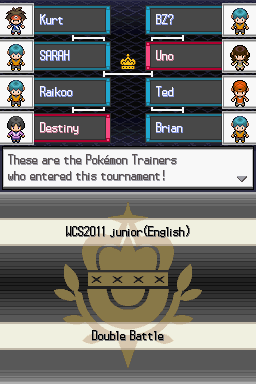 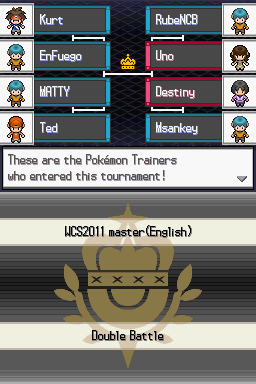 There exists a file in all versions of the game that contains data for twelve additional tournaments, all of which are unused. If imported to the Download Tournament menu, it is shown to be data from the 2011 Pokémon World Championships. The ruleset, trainer data, and Pokémon data from the championship was all carried over, so the tournaments can be played as normal Download tournaments. However, the tournament files are slightly unfinished, because the names of the trainers and Pokémon are very weird and out of place.

Each division of the championships (Juniors, Seniors, and Masters) has a tournament file. One is the standard tournament, no modifications at all, while the other is a toned down, easier version. The remaining six files are just duplicates of the first six.

The presence of these tournaments is quite odd, as Pokémon Black 2 and White 2 weren't even out during the 2011 World Championships. These were probably going to be future Download tournaments at one point, or they could have just been used for testing.

Most of the Generation IV key items still exist. A handful, like the Lunar Wing and Magma Stone, are used (fun fact: this is the first time the Magma Stone has been used since it was implemented in Diamond and Pearl!), but the vast majority aren't.

And yes, that includes the other unused key items from Diamond and Pearl like the Seal Bag, Red Chain, and Azure Flute.

There is leftover code and a script command (0x15F) from an extra WiFi mode that was removed before the game was released. The command begins the same as all other WiFi commands, but essentially does nothing. Due to the amount of code left, there is no way of knowing if this command was for debugging or a late-removed feature. However, it is mixed into the middle of the other such WiFi-related commands and as such may mean that it was meant for the player.

Whatever it was, it likely belonged to the woman on the right at the top of the stairs in each of the Pokémon Centers.

All of the areas that could be accessed only in Black and White still exist, however, the headers use placeholder data so the maps can't be visited without some fixing. These areas include the Challenger's Cave, parts of Relic Castle, N's Castle, Route 10 and Victory Road. The Cold Storage was replaced with the PWT so new headers have to be added. The matrices and map models don't have to be readded.

The scripts, text, wild Pokémon data and some building data were lost to time. By default, these maps use the Route 6 theme. The game still identifies the locations correctly in the save menu to retain location compatibility with Black and White, however, when entering the maps, no eyecatch is present. For some maps, such as Route 10, the arrow pointer defaults to the center of the map since the location technically does not exist in the game.

A full list of all the unused maps can be found on the notes page.

These games have the same anti-piracy features as Black and White, with the experience issues. However, they have a new and exciting layer of random freezes, too!

For the sake of consistency, every Pokémon in every Pokémon game is given a Shiny variant. Most Shiny Pokémon have been obtainable through random chance encounters or event distributions, including most Legendary Pokémon. However, a few Pokémon cannot be obtained in this form without hacking, and as a consequence, normal players would never be able to see their Shiny coloration.

In the Japanese version, Roxie, the gym leader, spells out "Dogars", the Japanese name for Koffing. In western versions, she spells out "Pokémon" instead. Due to the slightly longer time to do so, she does not begin the song with "1, 2, 3, 4!"

Part of the post-game involves you following a Zoroark through Victory Road, eventually ending up in N's Castle. In the Japanese version, if you leave the cave without following it, it will appear at its original spot but will not move, preventing entry into N's Castle as well as rendering the player unable to capture Zekrom/Reshiram. Talking to it at this point gives you the same text you get if you talk to it before beating the game.

This glitch was fixed for all other regions.

After facing Marlon and finishing the events of the Frigate, but before Ghetsis, if you talk to Marlon, one of the text boxes that appears will be completely empty. This bug was rectified in international releases.

The requirements for leveling up your Trainer Card (changing its color) changed between versions. In the original Japanese version of the game, one of the requirements was to obtain all of the medals and complete the Medal Rally. In the international versions, this requirement is replaced with the challenge of leveling your Entralink's Entree Forest level to 30. Because of this, it is possible in the English version to fully level up the Trainer Card from a new save file, which is impossible in the Japanese version.

A total of 15 C-Gear skins were distributed over the Pokémon Global Link. Six of the skins were exclusive to the Japanese versions.

* Great Adventurer, Entertainment Master, and Top Medalist can still be legitimately obtained if the player earned the other unobtainable prerequisite medals prior to the service shutdown.