Only Blue Rescue Team was ever released in South Korea, as Hyundai would not license a version of the Game Boy Advance for release in Korea; as a result, there are no first-party Korean games for Game Boy Advance at all.

15 years after the games came out, they were remade in 3D as Pokémon Mystery Dungeon: Rescue Team DX. 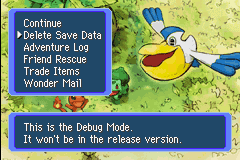 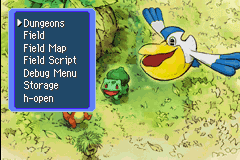 There is a Debug Menu that can be accessed by patching byte 0xE5B08 (Red Rescue Team) or 0xB7184 (Blue Rescue Team) to 0x10. This can be done by using the following cheat code:

For Blue Rescue Team, the ROM patch must be done manually with a file editor, since there aren't any Nintendo DS cheat devices that support this feature.

As a result, this will replace the "Delete Save Data" option; also note that after opening the main menu, the cursor will point to it by default rather than to the "Continue" option.

However these features do work in a leaked Japanese Debug-Enabled build, in which is documented here. 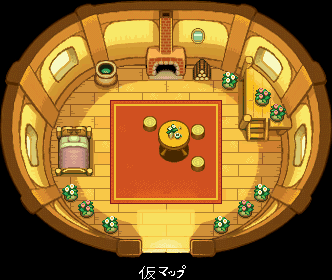 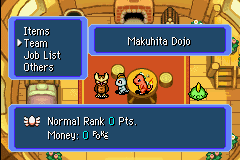 Besides the Debug Room, there is another unused area accessible via these cheat codes:

After activating the code, walk though any warp point in the overworld to access this area.

Despite the "Makuhita Dojo" area label shown in the overworld menu, this room seems more like a house than a dojo: it has a bed, a fireplace, and many flowerpots. The Japanese label "仮マップ" on the lower part of the map means "provisional map". Also, it is possible to walk on the table, but not on the stairs present on the right.

There are two Pokémon NPCs in this room: a Noctowl and a Gulpin, respectively. When talked to, they will both give a red "Unregistered dialog script" line. If the room is accessed before saving Magnemite, these NPCs will be absent.

The background music is the same as the one used for Makuhita Dojo mazes. Leaving the room (after disabling the cheat code) will send the player to in front of the Makuhita Dojo entrance.

The graphics and dialogue assigned to these Pokémon are used for various game mechanics, but they can't be fought or recruited by any means; thus, all their data goes unused.

They can be used as the main character by using the cheat codes below, in which the "????" corresponds to the relative Pokémon ID code.

Note that this code should be enabled before finishing the personality test. This will force the game to select Charmander as the main character, and then to change it into the desired Pokémon before the first cutscene.

Stat tables can be found on the notes page.

Below are explanations about their use by the game:

These animations are left unused for Munchlax, as can be seen in the video.

These graphics are loaded in VRAM while the game is running, but remain unused.

This game has several dungeon tilesets that are not used during normal gameplay, many of which were later used in the sequel Explorers.

An early version of Pitfall Valley's tileset. Used on the first floor of an unused dungeon, "Autopilot". Was later used for Tiny Meadow in Explorers.

An early version of Purity Forest's tileset. Was later used for Final Maze B23F in Explorers.

A palette swap of Waterfall Pond that could've been an early version of Southern Cavern's tileset. This tileset is included in Explorers, but remains unused.

An unused forest tileset (a palette swap of 0x14) that's used on the third floor of an unused dungeon, "Boss 3". Was later used for Lush Prairle in Explorers. 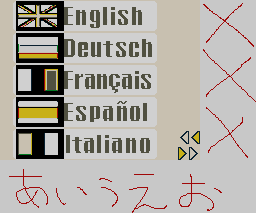 Some freehand Japanese writing and cross marks are loaded in VRAM when displaying the European language-selection screen. These are the first-row characters of the Hiragana alphabet.

The title background, which is different for the US version only, has the lower part unseen.

These HUD characters are loaded in VRAM after entering a dungeon. Note that the adjacent used characters were removed from the image manually.

This sprite is loaded in VRAM after entering a dungeon, along with all the other item sprites. In the image above, it is represented using all 13 item sprite palettes. These sprites look like gears.

This sprite is loaded in VRAM after entering a dungeon, but during gameplay it's replaced by the HP damage/cure amount or the "MISS" notice. It was probably intended to indicate a placeholder during development.

These animations are loaded in VRAM after entering a dungeon, along with all the other Pokémon shadows. There are three sizes of shadow in the game, but when standing on water, only the big ones are used regardless of the size of the respective shadow when on the ground. Also, these seem to be early designs when compared to the used ones.

Found Only in ROM

These graphics are present only in the ROM, with no known use in the game; thus, they are probably represented with incorrect palettes.

These HUD characters are found right after the ones loaded in VRAM. In the US, Australian, European, and Korean versions, all the Japanese characters have a different background color and don't have anti-aliasing.

These four sprites are found right after the other Legendary Pokémon mini-portraits, which indicates the progress of the game story when loading the save.

This Japanese writing is found right after the item sprites in Red Rescue Team. It says "around this area".

There are many text icons in the dialogue text font, but this one is completely unused. Also, it is unclear what it was meant to represent.

These are the unused characters for the screen showed when entering a dungeon floor. Interestingly, there is no lowercase "q".

This is a placeholder portrait found in Skarmory's data. The Japanese in the graphic corresponds to Skarmory's Japanese name.

In addition, there is a duplicate of Rayquaza's portrait in the files, stored separately from the used one.

These can be found in the Kangaskhan Storage after activating the respective cheat code (except for the "Nothing" item):

There are two unused tracks in the games. It is unknown where they would have gone, but judging by the file names they were at one point intended for a cutscene and training menu of some sort. The word "zukkoke" is Japanese for "foolish" or "stupid."

A track consisting of four consecutive sound effects, of which only the third is used. Judging by the file name ("orugoru" is Japanese for "music box"), this could have been intended for the Music Box item. In the actual game, the Music Box never makes any sounds and disappears from the inventory if the player attempts to use it.

There are two sound tracks consisting of almost identical data, used when leveling up:

There is another couple of sound tracks, which in this case consist in the very same data, used when receiving a mission reward:

The Pokémon Size value is actually indicating the amount of video memory necessary for its relative overworld graphics. Valid values can go from 1 to 6, but only Pokémon with sizes of 1, 2, and 4 are present in the game.

In the main Pokémon data, there is a value that sets the default movement speed modifier, but no Pokémon have a set value different from the regular speed. Also note that the value can go from -2147483648 to 2147483647, which is quite overly long considering that the actual range of valid speed values is only six.

Many Pokémon have no second type, but if the data for a Pokémon is set as such for the first type, it will be displayed as having "None" as type.

Only some unused Pokémon have "None" set as their friend area. These can still be recruited, but the game will always ask the player to release all of them after leaving the dungeon, saying that the friend area is full.

As with the "None" Pokémon type, this is displayed only if set as the first ability. Also, this ability has no description text.

Munchlax can evolve to Snorlax at level 40, but this cannot be triggered in-game, because Munchlax is unobtainable.

Diglett and Dugtrio are specially programmed to not display their shadow, which are still actually set to be, respectively, medium and large.

Several floors have data for Pokémon with zero chance to appear. This was done by setting their probability value to 0. Most of these seem to be leftovers from when presets were copy-pasted for some floors.

There are 20 unused coordinates for the world map locations. Below is a graphic comparing the full screen of used ones and a mockup of the unused ones:

The unused entries are, approximately from left to right and from top to bottom:

There are three types of unused coordinates:

These tactic names and descriptions are found in the ROM along with the used ones.

This is found in the Debug Room.

This red text line is displayed in the textbox when talking to an overworld Pokémon which has no dialog script set. It can be found in the unused overworld areas. 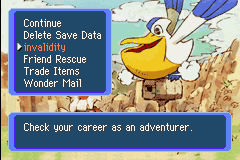 Effect of cheat code below. Note that this works even if there is no game saved.

This red word is displayed in place of undefined string variables in textboxes. The following cheat code forces the game to show it in the main menu:

This code will change the "Adventure Log" text menu in "$m0", which is a text macro for pointing a string variable. Note that there aren't equivalent cheat codes applicable for Blue Rescue Team, for which this change can only be done by editing the ROM file.

This red word is present in the ROM after the "invalidity" one. It's probably a placeholder for undefined string variables.

Also note that the lower part of the sea has a unique graphic that is normally unseen.

The differences are the same as for Red Rescue Team, except for these facts:

The list of recruited Pokémon shows the relative species in brackets in the Japanese and Korean versions only.

Friend Areas in the game are sorted in regions that can be traversed on this alternate overworld map; in the Japanese version only there is the word エリア (area) after the name of each region; additionally, for the player's team base, there is the word きち (base) after the team's name. A similar thing happens in the Korean version.

Early Japanese copies have a glitch that may erase saved data in any Game Boy Advance games inserted into the DS's second slot other than Red Rescue Team.

The DS version of the game Blue Rescue Team has recieved some changes to get it working on the DS Hardware, such as these.