Internally named Elsa, Leo and Sonia. Elsa and Sonia are seen in the background of one of the main screens, but Leo is absent from the game. They also have battle portraits, which can be seen here.

Colorless is the only type to not feature in Daily Challenges, although an asset for it and the type reward coin exists; mentions of a deck box and card sleeve also exist in files. Not all types have been featured in Special Challenges, either. 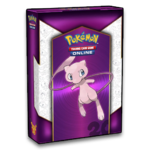 Internaly named "Generations Mew Deck Box", supposely to have been accompained with its related card sleeve from the Mew Mythical Pokémon Collection's redemption code, like other deck boxes from similar products.

Some achievements and Gem images are still present in the files.

Currency indicators of the game's old menu. The booster icons refered to Booster Credits, and Tournament Keys (the key icon) were replaced by Event Tickets with the same initial purpose before being available, then introduced in August 2020 with a different design.

Cosmetic items for the Trainer's Avatar hands, such as cards, Pokémon figures and miscellaneous were also removed in the game's redesign around mid-2013 but still exist in the assets. Players that obtained hand items through redemption codes no longer have acess to them. A full gallery is available on spriters-resource.

Nine unused emotes can be found in the files.

Symbols for the Diamond & Pearl sets Majestic Dawn, Legends Awakened and Stormfront, and the promotional McDonald's sets from 2010 and 2012, none of which have been available to players. Higher resolution versions of Diamond & Pearl symbols were used while the game was still browser-based.

All cards in the game have a rarity, making the first icon unused. IconRarityRarePrime is a copy of the Rare rarity icon (white star), but Pokémon Prime are searched by Rare Holo rarity (orange star) instead.

As Spectator Mode has never been implemented in the game, these messages have never been used.

Winning with any of the Lost Thunder Unown's Abilities displays a "VICTORY!"/"DEFEAT" screen spelled out with Unown. All existing Unown however are in the game's files, even "letters" not needed for other languages.

Models for the Golden Gate Bridge and Space Needle exist in the game.

AchievementPopup is a leftover from when achievements were still in the game.

Venusaur-EX (XY Promo 28) is included in the assets for Logan's cards, but he does not use it in the Trainer Challenge (regardless of difficulty) or Test Deck Mode.

Typhlosion (Lost Thunder 42)'s ability has a special animation that is never seen by most players due to being a subpar Stage 2 Pokémon card. 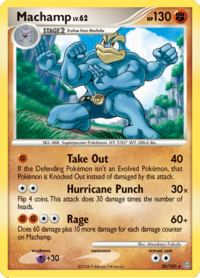 Many cards from the Majestic Dawn, Legends Awakened and Stormfront expansions (released before PTCGO's operations) were searchable in the Collection area when looking for not owned cards but never obtainable by players. Some Stormfront cards however were used by the Trainer Challenge (a short single-player campaign) AIs up to April 2013:

All unobtainable cards have been removed from the servers around January 2016.

This former currency was used with redemption code cards found in physical booster packs. Booster Credits could be redeemed for booster packs of the player’s choice from HeartGold & SoulSilver through Boundaries Crossed expansions. This code card method ended on July 2013 when codes from a booster pack became redeemable for a virtual version of that specific booster pack. The February 7, 2014 update automatically redeemed all remaining credits for Boundaries Crossed packs.

This mode allowed players to play their chosen deck against another randomly selected player like ranked battles (later renamed to Versus Mode), but did not count toward player rank or earn trainer tokens or bonus wheel spins. The practice battle option was retired on March 25, 2015.

Players could undo playing certain cards on the field like basic energies unless it would break the game's state. This option was removed on November 6, 2015 to "streamline gameplay and better match competitive play environments". UI changes have also made less common to misclick during a game.

On March 30, 2016, the Unlimited format no longer existed in Versus Mode and Tournaments (now only available in friend battles), being symbolically replaced by the Legacy format. Cards previously banned in the Unlimited format for game balance can be played again, but due to these changes the format has virtually no playerbase.

The in-game chat for online battles has been replaced by canned messages and emoticons on September 26, 2016.

Gems were a purchaseable currency only available to Canadian players from April 19, 2013 to October 29, 2018. Similar to Trainer Tokens, they could be redeemed for items in the in-game shop or used as a currency for trading with other players.

Vivillon (XY 17) has two different obtainable cards, one featuring the Meadow Pattern and one which changes its artwork depending on the set language. A feature which mimics this card's distribution over each country.