The first main-series Pokémon games in full 3D, Pokémon X and Y are set in the faraway region of Kalos and feature 72 new Pokémon, a huge regional Pokédex separated into three sections, and brand new features such as Mega Evolution and the Fairy type.

Also, fashion and cafés. It is the equivalent of France, after all.

In the Generation VII games, Raikou, Entei, and Suicune's Hidden Abilities were all changed to Inner Focus, and can be obtained legitimately by importing a Raikou, Entei, or Suicune from Virtual Console Gold, Silver, or Crystal to those games through Pokémon Bank.

For the sake of consistency, every Pokémon in every Pokémon game is given a Shiny variant. Most Shiny Pokémon have been obtainable through random chance encounters or event distributions, including most Legendary Pokémon. However, a few Pokémon cannot be obtained in this form without hacking, and as a consequence, normal players would never be able to see their Shiny coloration.

2 unused static encounter slots exist corresponding to Scatterbug and Abomasnow, neither of which are used at any point in the game. Both encounters are shiny locked, and where they may have been placed remains a mystery, although it is likely Abomasnow would've been found on Route 17 (Mamoswine Road).

As with every game since Generation IV, every single Key Item from previous games, used and unused, remains in X and Y, completely unused. Everything from the Seal Bag to the Lock Capsule still exists, but with its uses removed.

The Apricorn Balls and Sport Balls from HeartGold and SoulSilver and the Park Balls from all Generation IV games remain nonfunctional, but the Dream Ball from Black and White and the Safari Ball from previous games can be hacked into the Bag and function properly.

The Apricorns themselves from HeartGold and SoulSilver can be hacked into the bag, but have no use.

A Key Item found at 0x02BA. Its intended use is unknown.

The Key Items found at 0x02C2 and 0x02C3 are two variants of the same item, apparently for the male and female player character, respectively. Using the item leads to the screen where you can change your character's clothes. This suggests that you could change your character's clothes at any time by using this item, but the game was changed to incorporate dressing rooms into Pokémon Centers...which makes a lot more sense, actually.

The Travel Trunk would finally be implemented as the "Clothing Trunk" in Pokémon Let's Go!, not as a key item, but as a section in the bag.

While the version used in-game is present at 0x0281, another one exists at 0x02CA, unused. The reason for this duplicate is unknown.

While the player only uses the Mega Ring, Korrina's Mega Glove and Diantha's Mega Charm exist as Key Items at 0x02CC and 0x02CD, respectively. Their bag icons were either removed or not implemented, so the game uses a question mark as a placeholder icon.

AZ's Floette, known as the Eternal Flower Floette, is briefly seen in a cutscene during the ending of X and Y, but is not obtainable by any normal means, nor has it been distributed in any event. Despite apparently existing only for a cutscene, there were clearly initial plans for it to be a special form of Floette to be obtained by the player in some way. This would most likely be through events.

Unlike normal Floette, Eternal Flower Floette cannot evolve into its next stage: It is also in the Undiscovered egg group, making it unable to be bred. This is akin to the Spiky-Eared Pichu in HeartGold and SoulSilver, which couldn't evolve into Pikachu.

It has higher stats than a normal Floette (only 1 stat lower than its evolution, Florges), its own unique cry, and has a unique signature move, Light of Ruin. 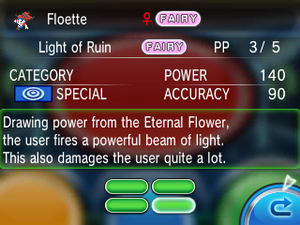 Eternal Floette's signature move has the highest base power out of all Fairy Type attacks, and is the strongest Fairy Type move in the game.

Eevee's evolution method into Sylveon has an extra parameter to signify which Type of move it needs to have to evolve, and it works with any Type, but only Fairy Type is used under normal conditions.

Thousand Arrows and Thousand Waves are moves unobtainable in Generation VI, confirmed in Generation VII to have been intended for Zygarde. They are physical Ground-type moves with 90 power, 100% accuracy, and 10 PP.

Both moves have extra effects. Thousand Arrows hits Flying or Levitating Pokemon and knocks them to the ground (similar to Gravity), while Thousand Waves prevents affected Pokemon from switching out or fleeing. 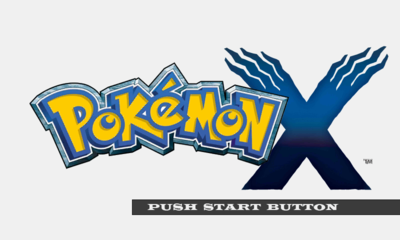 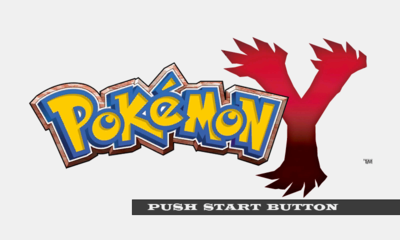 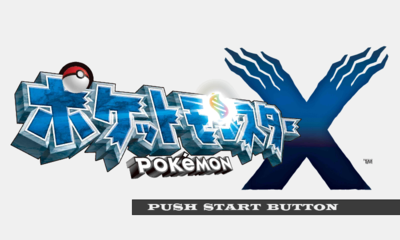 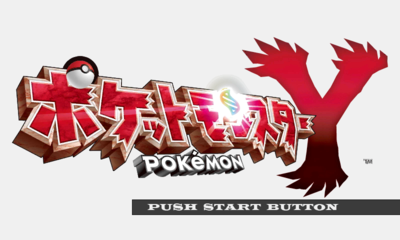 These mockups are comprised of separate graphic elements for an early title screen layout. The graphics fit a resolution of 800x480 pixels, which is exactly double the native resolution of the 3DS. The final title screens use a different font for "Push Start Button". The "TM" symbol is also in a fixed position, rather than correlating to the "X" or "Y" logo.

Torterra's Shiny Eye Texture has what appears to be a work in progress Eye that is missing from the non-shiny eye texture. Shiny Left, Regular Right.

There is an early preview image for Santalune City, taken at night. This early version can be found in a\0\6\9, which is the same directory for the final preview images.

A large Japanese nametag for a female Pikachu. This image can be found in a\0\0\4.

Placeholder graphics for the HP/EXP bars, element type, and status effects respectively. All of these can be found in a\0\0\5.

A placeholder image for the Pokémon Type graphic in the Friend Safari. This is from a\2\0\0. 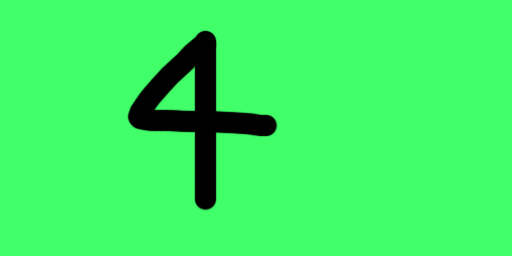 Two placeholder images found in a\1\5\2, alongside various Holocaster graphics. 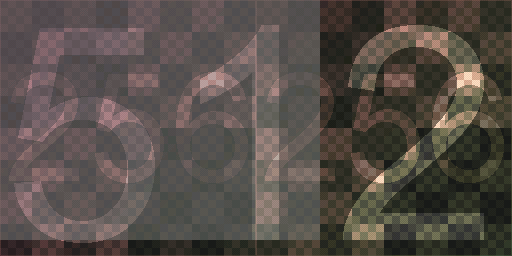 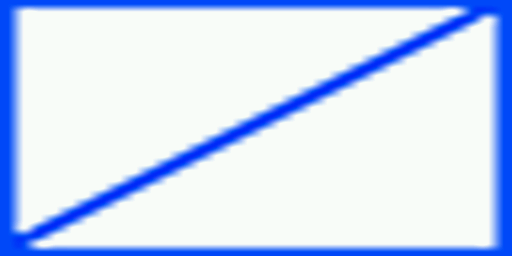 AZ's Floette has its own unique cry, a slightly modified variant of Floette's normal cry. However, because the Forme itself is unobtainable, its cry goes unused.

There are 7 versions of the same song, all named bgm_xy_test1 through bgm_xy_test7. They're all the same song: "Friends Theme - A New Meeting", although the waveforms of 1-3 are slightly different from 4-7. These songs may have been used for testing various locations of overworld themes before they were implemented.

As with the Generation V games, a remix of the "Battle! VS Champion" theme from Red and Blue is included to be used in the finals of the Pokémon Video Game World Championships tournament. This is a different remix from the Generation V games, though the intro remains the same. There is no way to hear this song through normal gameplay, as it is locked out of the normal multiplayer battle music. Oddly, in the Pokémon Omega Ruby & Pokémon Alpha Sapphire: Super Music Collection soundtrack, the theme is titled Victory! (World Champion), a naming scheme typically reserved for victory themes.

There are three files, me_xy_test1 through me_xy_test3, which are all just copies of the Pokémon Center's healing machine sound effect. This could have been used for testing player-related sound effects.

Their models are found in "128.bin" & "129.bin". Their internal names are "fwaza_aqua" and "fwaza_ice", matching the naming pattern of the other terrains seen in-game ("fwaza_grass", "fwaza_mist" and "fwaza_eleki") 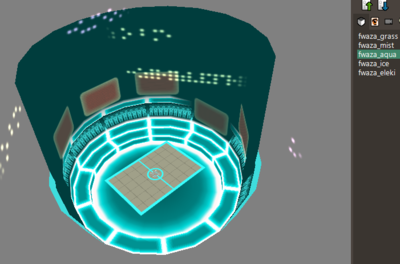 Two files named out.txt and out2.txt can be found in a folder called sounddebug. Each file contains comma-separated number values.

There are a handful of debugging-related files in the RomFS. Their functions are currently unknown.

As usual, PUSH START BUTTON was changed to PRESS START in the English releases.

In the Japanese version, a cover of "Happy Birthday to You" plays during the player's first visit to a Pokémon Center on their birthday; on later visits, it is replaced with a music box version of the Pokémon Center theme. Because this song was still under (legally dubious) copyright internationally at the time, this was removed from international versions, and only the latter theme is heard.

This patch was released on December 12, 2013. Starting in this update, each subsequent update is required to go online.

This patch was released on April 2, 2015, alongside the version 1.3 patch for Omega Ruby and Alpha Sapphire. Both patches fix the bugs with music related to usage of the Poké Radar.

This patch was released on April 22, 2015, alongside the version 1.4 patch for Omega Ruby and Alpha Sapphire.