Rainbow Bell Adventures is the first game in the TwinBee series to be a side-scrolling platform game, unlike the rest of the mostly vertically scrolling shooter games in the series.

Located at SNES address $81C977-81C98E (PAL English version) is the unused string STAGE SELECT. The pointer $BC61 doesn't exist, which is required to load it. Although the same text appears in the Battle Mode setup, its string is stored elsewhere in a compressed tilemap.

In the European version the date is updated but the credit for "scroll program" is removed:

Strangely, these dates are reversed on the respective versions' title screens - the European version reads "©1993" while the Japanese is "©1994". 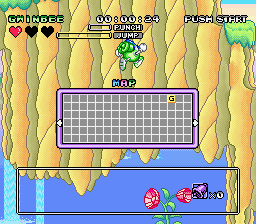 Pause during gameplay and press Ax5, Bx5, Xx5, Yx5, Lx5, and Rx5. A sound effect will confirm correct entry. Unpause the game, then press and hold Start, again pausing the game in the process. Now the character currently in use can be moved around using the D-Pad.

The level order in the Japanese version is a set of levels arranged in a quadrilateral form with an interconnection between different stages. Some stages have alternate exits (similar to Super Mario World). In the European version, the order is strictly linear and a specific level can't be accessed if the previous ones aren't cleared.

Many things were cut when the game got released in Europe: