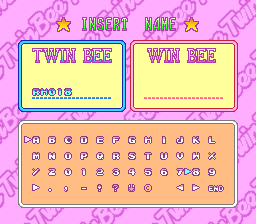 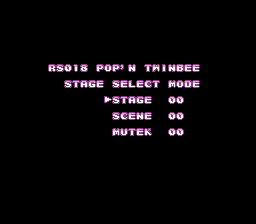 This menu includes a bonus setting MUTEK(I) to toggle invincibility.

Note that both versions list RS018 on this menu even though the European version used RH018 for the name entry.

A total of 10 button codes exist in the game: 8 are used while paused, and the other 2 are in the options screen. As of this writing, cheat code sites are missing entries or have errors, so here is the complete list of button codes, in the order they are stored in the programming.

These codes must be entered immediately upon entering the options screen. 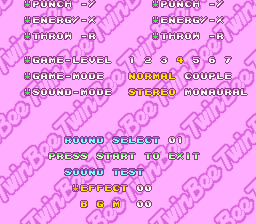 A sound test mode is hidden just below the Round Select, above. However, there's no evidence of a button code or way to access it normally. Instead, game enhancer codes can be used. After you have entered the Round Select button code, enter Pro Action Replay code 82ED44EE or Game Genie code 3330-1FD8 (Japanese version), or Pro Action Replay code 82ED4AEE or Game Genie code 3330-1468 (European version). Press Start to exit the Round Select. The screen will scroll back to the top and down again to reveal the sound test.

When you're ready to exit the sound test, press Select.

The sound test appears when $05 is written to memory address $7E1D54. 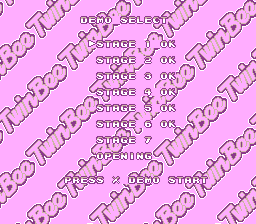 An unused stage select debug menu. Game enhancer codes are required to reach it as no programming was found that writes screen index $0D to $7E0032. Enter the codes, then pause the game and press Start.

Use the D-Pad to make a selection and press X or B to proceed. Note that Stage 7 is listed but is missing the OK, as the game only has 6 stages. Selecting it will cause glitches.

Memory address $7E0032 holds the index of the current screen (e.g., Demo Select is $0D). A pointer exists for index $0E, the final valid entry, but it only leads to a 6B RTL command which exits without doing anything else.