Porky Pig's Haunted Holiday is another mascot platformer on the SNES. Its most innovative feature is its random environment system. Levels will change their appearance -- for example, the first level can be set in spring, autumn, winter, or Christmas. 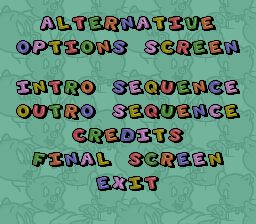 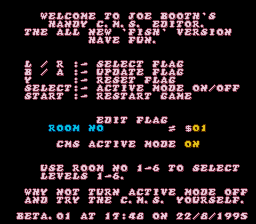 On the license text screen, wait until just before it fades out and quickly press Down, Up, Left, Left, A, Right, Down. This sets 7E1E7B to 01.

After that, the Alternative Options Screen appears. 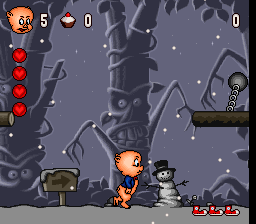 Bonus items that never appear in the game. Up to 3 of them can be obtained at once. Use the Game Genie code D7DC-BE78 to give yourself these odd items.

Interestingly, each level has their own versions of these bonus items!

A big-eyed frog. Judging by the animations, it would have jumped into the pond by the mailbox.

Some kind of cuckoo bird, this would appear inside of the mailbox by Porky's house.

An odd looking bird. Birds appear far off in the background, but never this close.

Same style as the PAUSED graphic. Probably used for either gameplay demos or a convention version of the game.

An enemy intended for the Mines level, but not used.

These graphics are loaded in the Options menu. It's unknown what they would have been used for.

Text left in the ROM from the compiling process. Psy-Q is a development kit that was used for various systems.

Copyright text for an audio driver that's never displayed in the game.