Portopia Renzoku Satsujin Jiken is a first-person whodunnit game designed by Yuji Horii (of Dragon Quest fame) that fits in a 40kb ROM. Along with your sidekick Yasu, you investigate around the real-life cities of Kobe, Kyoto, and Sumoto in order to find who the killer might be. It was a big deal for its time and can be considered the grandfather of the visual novel genre.

A complete fan translation is available, but be sure to play the "Rev. B" version of it.

A dialogue from the barkeeper, here showed with its original formatting. This is next to the text that is displayed when you learn about Kawamura by asking the barkeeper about Kouzou and after you showed him his photo or the lighter. The problem is that this dialogue would also only trigger before the player knows of Kawamura, thus making it simply impossible to be seen in-game.

When showing something irrelevant to Okoi, she's supposed to have two random responses. Due to a typo in the code, this one is always discarded.

Both the original PC-6601 and PC-6601 MKII versions of the game show how a key can't fit into a lock if another key is on the other side of it (either to ease the explanation to young players or to those who might be unfamiliar with this type of door). The Famicom version was likely going to follow suit, but all that's left in the ROM is this picture.

For comparison, here's how the explanation scene looks in the PC-6601 MKII version: 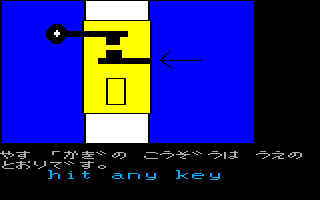