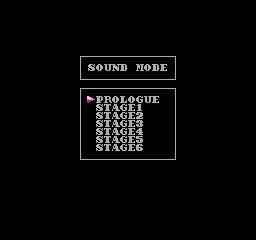 At the title screen, press and hold Left + A + B on the second controller, then press the Start button on the first controller.

Press Up / Down to select music, press A to play it.

Both versions of the game contain a hidden developer credit at 0x1C810.

The game was released in Japan as Captain Saver. When it came to the US, they called it the more straight forward Power Blade 2, made most of the text smaller, and added a bunch of fancy graphics.