One of two Nintendo 64-shaped bootleg plug & plays that flooded North American stores in the early 2000s (the other being the Power Player Super Joy III). It features 64 (ish) Famicom games, alongside some "Y2K" ROM hacks featuring Pikachu, Doraemon, and Hello Kitty. 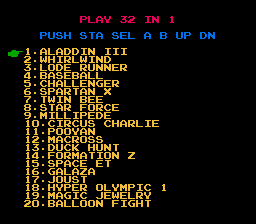 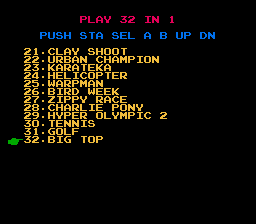 An unused menu with only 32 games as opposed to 64.

Giant text reading "POWER JOY". If similar plug & plays are to go by, this would have rolled across the screen for a second before the menu loaded.

Presumably to save space, Dig Dug and Warpman use the PRG data of their hacked variants, Kitty and Whirlwind, while using the CHR of the original games. This causes the colors to be slightly incorrect.