The game contains some leftovers from the original games, like VMU related content not used in the collection. By using cheats for infinite money in Power Stone 2, you'll bypass the 99,999,999G amount and it'll actually be at 999,999,999G which lets one purchase multiple Emperor's Crowns. If you attempt to purchase 11 of them, this graphic leftover from the Dreamcast version will load. 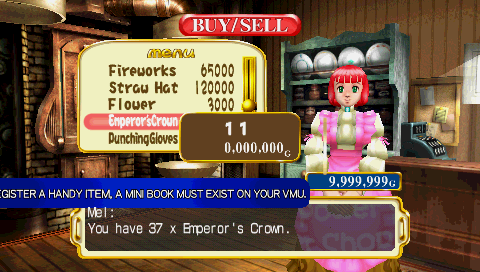 The file \data\cmn\pwsc_jam_u.imp is an image with the message "COMING SOON".

In both games, Falcon is named Fokker in Japan. While fitting for the aviator, it was probably changed due to sounding offensive in English.

The Japanese opening scene has three narrations instead of one, which are presented in the same order: The first by a male voice (Jurouta Kosugi), the second by a female voice (Sakiko Tamagawa), and the third is in English. Only the English one is kept outside Japan (the audio files are still on the UMD, albeit unused).

The opening has Japanese subtitles with the English text, and the characters have nicknames alongside their names, like 赤い疾風 ("Red Gale") for Falcon. Curiously, translations of those nicknames (Red Whirlwind for Falcon) became the name of their transformations in the English PSP manual.

All voices of Mel and Pride from the Item Shop were removed (the audio files are still on the UMD, albeit unused).

Several new features have been added to the original games, and a few removed. Below is a list for each game.