This page details prerelease information and/or media for Banjo-Kazooie.

The origin of Banjo-Kazooie can be summed up in a single quote:

Q7: Were you consciously trying to one-up Mario64 with B-K?
A: That's right. Banjo once had a bigger moustache than Mario, wore brighter coloured overalls and the game was originally called Really Super Duper Mario 64.[1]

...Well, okay, not really. The real story of Banjo starts with a Dream.

In 2013, Kirkhope put up several early tracks on his Bandcamp (and then had to take them down, for legal reasons). While some are unambiguously from Dream, others are less clear. Also included in this album were the tracks that are still present in the final game but unused: Advent, Mumbo's Rain Dance, Early Click Clock Wood, and so on.

Not even Kirkhope is sure where this track would have gone. The title implies it might have been for a female character, but who exactly is anybody's guess.

Despite the name, this track has no relation to the similarly named Biggafoot from Tooie. A version without the brass was used for the falling stalactite sequence in Donkey Kong 64's Crystal Caves.

This theme can be heard in footage of the game from E3 1997 (erroneously labeled 1998 in the video). The first 12 seconds would be altered and re-used for the minecart challenge in DK64's Jungle Japes, while the section from 0:35 to 0:57 would be used for the final battle against Gruntilda.

It is not known who "Elvking" is, and whether or not this character has any relation to King Jingaling, the carefree Jinjo king of Tooie (or perhaps some hitherto-unseen elven royalty in Dream). The middle section would be touched up slightly and re-used for the credits in Kazooie.

An early rendition of Freezeezy Peak, the 5th level in Banjo-Kazooie and one of the first levels in the game Grant Kirkhope had attempted to compose music for, having been told to use a longer melody than the 8 bar standard. Kirkhope stated that he didn't believe either this or the other early version of Freezeezy Peak displayed below had "enough of a wintery feel [to it], as well as [lacking in] a Christmassy element".

A slightly modified version of the track directly above, also composed for Freezeezy Peak. This incarnation is more complex than the first rendition shown above, with more naturally flowing instrumentation. While the majority of the composition would be scrapped entirely in favour of a more energetic score, 2 of the melodies would end up being included in the final version of the level's theme.

A slow, brass-heavy theme with unclear purpose. It was likely intended for Dream, as its main melody is shared with "Ogres" below, which combines it with Edson's theme. Tonally, it bears a resemblance to K. Lumsy's theme from DK64 (the percussion and strings at 0:56 are almost identical). Fitting, as K. Lumsy is himself a giant.

The original version of the Mumbo's Mountain theme, derived from Henry Mancini's "Baby Elephant Walk".[2] It can also be heard in footage from E3 1997. Interestingly, it shares its name with the first planned level of Kazoo, but it's not known if it actually dates back that far. This melody can actually still be heard in the final game, as the Ticker's Tower submap did not receive a new theme to match. A jazzy version would also make it into DK64 as Tiny Kong's Tag Barrel theme.

What would eventually become DK64's overworld theme. Likely to have also been a Dream track, given its drumline matches that of the main theme.

If you've ever wondered why Angry Aztec and Mayahem Temple sound so similar, here's why: both of them originated from this early track. The section at 0:39 would also make it into DK64's Hideout Helm.

A fight theme that intertwines parts of "Boy" and "Giant", indicating a showdown between Edson and the aforementioned Giant character (or some ogres, judging by the title).

This theme would later be re-used for Fungi Forest, the 5th level in Donkey Kong 64, and a level which was notoriously planned to be in Banjo-Kazooie (albeit with the name Fungus Forest). While there is footage at E3 1997 that takes place in Fungus Forest, the music that plays features a section heard in DK64, but not here. This early version of the track is noticeably faster, shorter, and includes different melodies and instrument allocation midway into the theme.

An early composition for Treasure Trove Cove, the 2nd level in Banjo-Kazooie. Completely different to what we would receive upon release, with a generally slower, less energetic melody that Kirkhope believed "didn't really feel right" for the level. Like Boss1, Jungle1, and Temple above, this composition can be heard in early footage of Banjo-Kazooie displayed at E3 1997.

"Quit", an unused jingle still present in the final release's code, is also included among these.

An extended version of the theme played when Banjo & Kazooie obtain a Jiggy. This can be heard in action near the end of the Rare Revealed video.

A slightly shorter rendition of the above.

A similar (albeit shorter) jingle would be used in Banjo-Tooie upon collecting a Treble Clef. 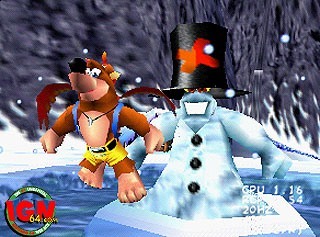 A debug display seen in an early screenshot that displays some info such as CPU/RSP usage and framerate. It's unknown if this is still present in the final game.

Retrieved from "https://tcrf.net/index.php?title=Prerelease:Banjo-Kazooie&oldid=1277040"
Categories:
Cleanup > To do
Cleanup > Works In Progress
Games > Games by content > Prereleases