From The Cutting Room Floor
< Prerelease:Banjo-Kazooie
Jump to navigation Jump to search

This is a sub-page of Prerelease:Banjo-Kazooie.

It was now 1997. With Dream dead and buried, work began on a new game that, while mostly a clean break, would still retain some elements of it.[1] Since the bear character (henceforth referred to as Banjo) was so well-liked by the team, Stamper and Mayles elected to make the new title a platformer built from the ground up around him and his abilities.[2][3] This was a deliberate attempt to scale back development after Dream had gone astray; given Rare's prior experience with the genre, a platformer would be easier to put together in a shorter amount of time.[3][4]

Kazoo, as it would be named at this point (though Loveday once stated in 1998 that it had been known as Banjo)[5] was a 2.5D scroller that could be considered a direct spiritual successor to Donkey Kong Country, in that it adapted many of its design principles to fit a 3D environment; the team describes it as the nexus between their earlier DKC work and the final Banjo-Kazooie.[1] The Rare Revealed footage makes it bear (no pun) a passing resemblance to Crash Bandicoot, in that Banjo is seen navigating a jungle setting, picking up fruit, and killing enemies by jumping on them; he can move in any direction, but is restricted to a narrow path. Unlike Crash, though, Kazoo emphasized side-scrolling over forward-scrolling, with the latter only limited to the occasional branch away from the main path.[1][6] Concept art for the unseen second level (a beach) also indicates that other stages would have been more free-roaming than a typical Crash level, more similar to what Grunty's Revenge would be.

The game appears to still be running on Dream's mesh engine-- many of the tree graphics are the same as in Dream, and the path design looks quite similar. Lead programmer Chris Sutherland is quoted as saying that the team spent two months using Dream's "visual technology" to create Banjo before changing up their approach,[3] which would seem to coincide with the two months that made up Kazoo's development period. Regardless, much of Dream's support code carried over to the new iteration, which shortened its development time considerably.[3]

In retrospect, Kazoo somehow managed to be even more secret than Dream, as save for a blurry portrait in Banjo's house (long believed to have been depicting the lost Fungus Forest level from Banjo Kazoo), nothing whatsoever was known about a 2.5D version of the game until the Rare Revealed video released in 2015.

Concept documents shared by Mayles on Twitter around the time of Rare Replay's release shed further light on Kazoo's design.

Detail from the Jungle 1 concept map, showing early art of a Jiggy.

"Every self-respecting platform game hero has to have something to collect, but we wanted something that rather than being just a shiny object, was a shiny object that could actually be used for something [...] The desire to have a direct connection between this shiny object and opening up the worlds led to completing pictures of the worlds like a jigsaw, which in turn led to the missing pieces being the Jiggies."

Contrast the DK Coins of Donkey Kong Country 2—which only affected the player's percentage score—but compare Kremkoins from the same game, which could be spent to open up levels of the Lost World.

"Jinjos came from a years-old idea (dating back to Donkey Kong Country) of having a 'hard-to-collect collectable'-- one that would run away or camouflage itself instead of dumbly sitting around waiting to be collected. Funny how things turn out, as the Jinjos never ran away and even whistled to attract your attention! Actually, they were probably the dumbest collectable ever."

The name "Jinjo" was derived from "Ginge", which was Kirkhope's nickname for Ed Bryan, the "esteemed ginger artist" who designed the Jinjos.[10][11] While intended as a lighthearted tease, the name eventually stuck because the team felt it was "a really good fit" for the creatures, especially given that the first Jinjo created was orange in color.[10] (As a further nod to their origin, Bryan is credited as Ed "Jinjo" Bryan in Banjo-Kazooie, Banjo-Tooie, and Banjo-Kazooie: Nuts & Bolts.)

A document dated January 16, 1997 shows the nature of Kazoo's antagonists had not been fully nailed down yet, though the general running theme seems to be a mix of funny animals and humanoid mythological creatures. A few designs can be spotted in the video, such as the snail and bull; many others would make it into the final game (or other games) in some shape or form: 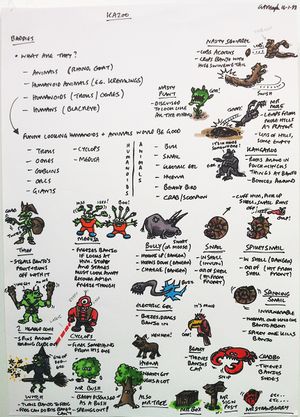 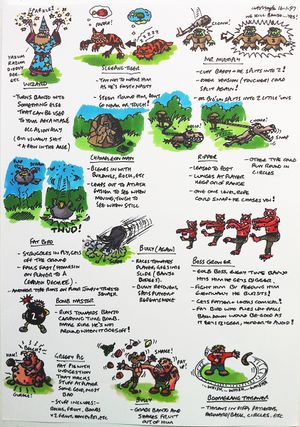 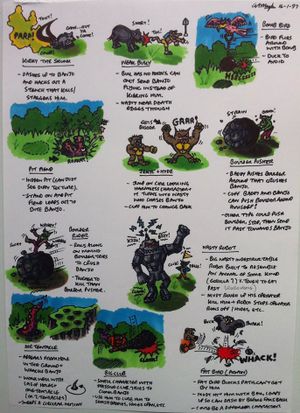 In addition, several other enemies are referenced by name in other, later documents, which would indicate they were designed later:

Further driving home the DKC comparisons, the team also went as far as to pillage an old concept sheet from 1993 for movement patterns to base enemies off of. Unfortunately, the Kazoo date of the document isn't known.

Several concept documents detail Banjo's assortment of moves. Some can be seen in the Rare Revealed footage.

In addition to his melee moves, Banjo could make use of various sports balls to attack, in a direct parallel to DKC's barrels. These were:

These balls (except for the basketball) each had accompanying power-ups that could enhance their function:

A shuttlecock and pool ball were also under consideration, as well as a cricket bat, hockey stick, and golf club.

During the process of defining Banjo's moves, one of the team's ideas was to give him a double jump "based on Mario's but more flexible", such that the player "could double jump anywhere they liked".[2] However, they thought the sight of a bear doing a double jump unassisted looked odd, and needed some sort of justification. After much brainstorming, they came up with the "desperate" idea that a pair of wings would come out of the backpack to give Banjo a lift. Then, for a fast travel ability, a pair of legs would likewise sprout from the bottom and do the running for him. From there, the logical conclusion followed that these would belong to another character inside the backpack-- such as a bird. To stand out from Banjo, the bird was given various traits that offset his, such as a sharp-tongued personality, (and presumably also) red color and female gender.[2][3] 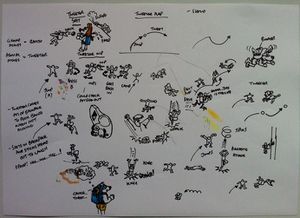 An undated concept document from around this time seems to be a brainstorming of the duo's tag-team abilities. Banjo's bird partner is given the name "Tweeter" here. 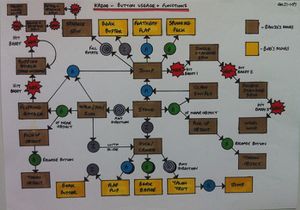 Another document dated January 27, 1997 details the game's control scheme. In this one, the bird has no name given and is simply "Bird".

The Rare Revealed build, having likely been the last one compiled before Kazoo was scrapped, features the bird, who (along with Banjo) uses an early model that still closely resembles the final one. These models would persist to Banjo Kazoo as well.

In addition, the Beak Barge and Feathery Flap can be seen in action:

One Dream element that carried over to Kazoo was its emphasis on theming. This eventually took the form of a musical naming scheme, which started when someone on the team pointed out the oddity of a bear named Banjo not actually playing the instrument that shares his name.[10][3] Soon other characters started being named after instruments, such as Banjo's little sister Piccolo[footnote 3] and his bird sidekick, who was given her (then-)final name of Kazoo to match her "annoying" personality (the fact that this was also the game's title was apparently a coincidence)[footnote 4]; a kazoo was also chosen for her so she could play a duet with Banjo, for "as yet unforeseen" reasons that would eventually evolve into the final game's "hoedown" intro sequence.[3]

Close to the end of Dream's development, DKC musician David Wise had been taken off the team to focus on RC Pro-Am 64, leaving Kirkhope in sole charge of the audio.[12][10] Kirkhope had written 107 tracks for Dream, but now found himself having to start over (mostly) from scratch, as the RPG-styled music clashed with the more lighthearted tone of the new game.[12] The first piece he wrote with the new direction in mind was (what would eventually become) the springtime version of Click Clock Wood.[12][13] Later, while looking for ways to add a more offbeat, quirky quality to the music, he would experiment further with the Beetlejuice-influenced style he had previously used for Dream's "Bully", and come up with a motif centered around alternating C/F♯ tritone chords to represent Banjo and Kazoo's contrasting personalities (F♯ being the furthest point from either C note in an octave).[13] This "oddball style" (as he put it) would become the basis for the rest of the game's (and in turn the series') soundtrack.[12][13] 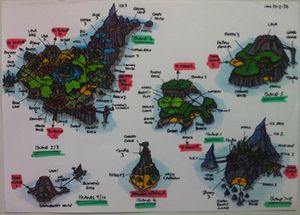 Long before Spiral Mountain or Grunty's Lair ever existed, Kazoo's world was made up of a chain of ten islands, with Banjo's house situated on the cliffside of the first (again, very Crash Bandicoot). One of the last known concept documents, dated February 23, 1997, was a layout of the game's map screen.

Among the rest of the documents shared on Twitter were concept maps of the game's first two levels. Both were drafted in early February of 1997. It is not known if these were the only two created before the game was overhauled. 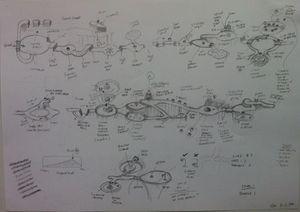 The first level, Jungle 1, is the one seen in the Rare Revealed footage. It was a mountain path that wound around a lopsided central peak; Banjo would venture from one side of the mountain to the other, encountering Snails, Mr. Helmets, and Bullies along the way. It ended on what would either be a gigantic column or the start of the next level (see below). 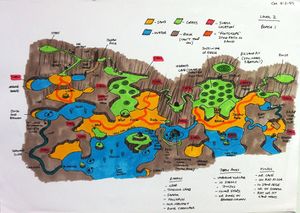 Two level ideas by Stamper both involved giant trees. One, titled "Up in the Big Trees", took place in a massive deciduous forest with no floor, where Banjo had to hop from branch to branch (similar to the redwood forest levels in DKC3). The other, titled "Big Jungle Treetops", was more tropical in nature, and focused on traversing treetops instead of branches.

Retrieved from "https://tcrf.net/index.php?title=Prerelease:Banjo-Kazooie/Kazoo&oldid=1085602"
Categories:
Cleanup > To do
Subpages