This page details prerelease information and/or media for Chibi-Robo!.

Chibi-Robo! originally started out as a point-and-click adventure game that was going to be published by Bandai. The game was first shown off at E3 2003 and was slated for a June 2003 release in Japan and spring 2004 release in the US.

The point-and-click concept was partly revisited in the Japan-only release of New Play Control! Chibi-Robo! for the Wii.

In addition to the gameplay, the premise was vastly different than the final, featuring an inventor named Professor Sendagaya, the creator of Chibi-Robo, a robot with the emotional capacity of a human. Two burglars, Cookie and Arnie, are after Chibi-Robo and make attempts to steal it. There were supposedly many Chibi-Robos around the professor's house, and it's up to the player, who commands one, to stop the burglars and keep the house tidy.

As Chibi-Robo! was originally a point-and-click game, the player did not take direct control over Chibi-Robo: 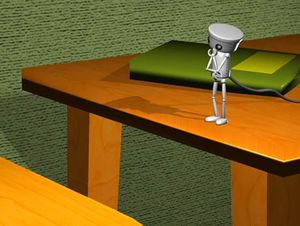 Chibi-Robo's design has remained consistent for the most part, but there are a few notable distinctions.
He appears matte silver in renders, and a light grey in gameplay. In the concept render shown above, He has bolts on his head and torso which are present in no other known beta media. Additionally, he appears to have a notably smoother bevel on his head.

Chibi-Robo would have a personality and skills that develop based on the player's actions. For example, if the player forces Chibi-Robo to work hard, it may gain new abilities that enable it to reach new areas.

Similar to the final, the player would be able to upgrade Chibi-Robo and give it new uniforms. However, the early version would include cosmetic upgrades not present in the final, such as new arms, legs, and heads, which have no affect on their performance. Additionally, sound and motion chips would change the sounds the Chibi-Robo makes.

Some new looks Chibi-Robo may have been able to acquire in the pre-release version include different-colored and bulkier bodies.

As in the final, Chibi-Robo emits the sounds of musical instruments in random notes on a scale when moving.
It's currently unknown whether the instrument changes depending on the material of the floor, as he only ever walks on one surface in the E3 2003 gameplay. What we do know, is that he emits the sounds of plucked Ukulele strings on wood, which was changed to a Marimba in the final. When jumping, he emits the sound of a plucked harp. this was changed to a rising whistle in the final.
The most notable difference however, is that he appears to whistle depending on his actions - for example, when he's happy or angry.

Collecting batteries increases Chibi-Robo's max battery capacity in the pre-release. In the final, you earn a higher battery capacity by obtaining enough Happy Points to increase your Chibi-Rank.

The music that plays in Professor Sendagaya's lab was used for the title screen music of the final game, remixed with new instruments, improved bassline and a slower BPM.

The intro sequence for the level is drastically different. Two arms on the side of the Chibi-House, which look like handles, extend outwards and pull Chibi-Robo outside of the house. The arms then place Chibi-Robo in front of the house, plugging it into the outlet. Lastly, Chibi-Robo gets up and removes the plug, which begins gameplay.