The success of Grand Theft Auto: Liberty City Stories was enough to meet the demands of another entry for the PlayStation Portable, which allowed Rockstar Leeds to expand their developmental horizons and take fuller advantage of the handheld's hardware. 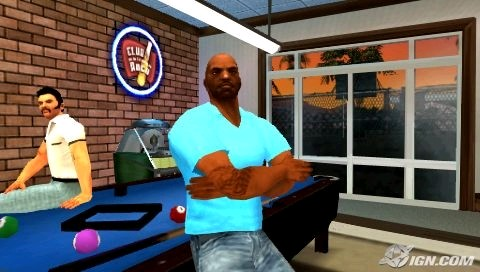 She would have also appeared in her aerobics outfit in the mission Shakedown, while in the final she only does so in Fear the Repo. This texture was left over in the final game.

The strategy guide by BradyGames that was released alongside the original PSP release shows a multitude of differences.

After getting on the boat and being ambushed by the assassins, you would be tasked to defend yourself from them with an M16 and eventually forced to abandon the ship. This was replaced by a short cutscene in the final game, but leftover text and audio remain. 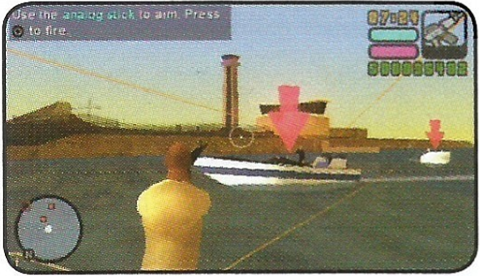 The cutscene when meeting Phil at the shooting range was slightly changed. The walls of the range also used a different texture.

The cutscene of Phil explaining what a cholo is was changed to focus in on them. Additionally, three enemies were highlighted on the outside and there were four enemies inside, while the final has two.

The guide shows one of the unused lines. 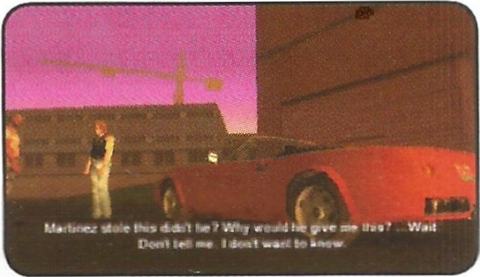 The guide describes and shows an additional cutscene at the end of the mission. After Phil drives off with his boomshine, Vic runs off on foot while firetrucks arrive at the burning warehouse. 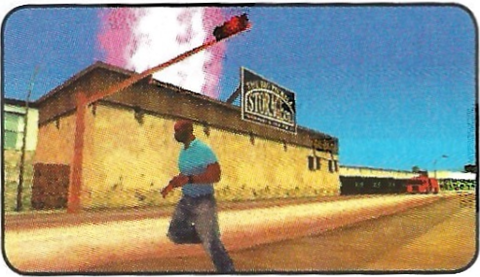 The guide states "..it's imperative that you avoid using a firearm. Not only do you run the risk of shooting [Louise], but also because the hillbillies return the gesture by whipping out their own boom-sticks if you use a gun." and that "...they target Louise first.", neither of which happen in the final mission. It's worth noting that according to an unused piece of text, at one point the mission would have failed if a gun was used at all.

The guide notes that "Surprisingly, the [Pay n Spray] is complimentary in this mission!", which is not the case in the final game.

According to the guide this mission would have rewarded $1000, while in the final game there is no reward at all. Screenshots show it was not a simple typo.

The guide describes a cut failure state: "Forbes' car is scheduled to be destroyed at 6:15am. A worker with a chainsaw spawns at this time to chop the vehicle up. If he's successful, the mission is failed." The mission fails instantly if you fail to get in the impound yard on time and after you're in, the time doesn't matter at all.

The cop being gunned down when entering the stadium seems to have been a short cutscene instead of just walking in on it.

The marker where you drop Reni off at the airport was originally near one of the entrances, while in the final game it is in the same spot where Jive Drive begins. Additionally, the marker to enter the stadium was at a side entrance on the southeast side of the stadium, while in the final it was moved to the same spot where Caught as an Act begins.

Gonzales is standing up in the cutscene, while he sits down in the final. The camera is also focused on Diaz during the particular line shown in the screenshot. 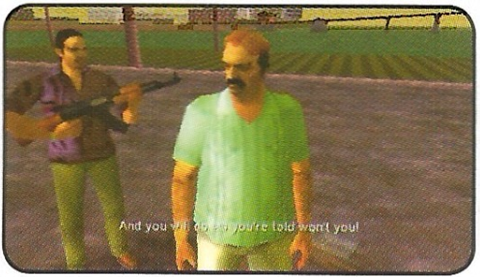 The roadblock originally had an enemy with a rocket launcher. The roadblock was further down the street as well.

An early version of the mission is showcased. After meeting Phil at his depot, he would tell you that a rig is needed to get into the army base. You'd be instructed to drive to the airport parking lot (next to the Vice City Transport Police building), Phil tells you to meet him at the base while you'd grab the Linerunner from the lot. After arriving to the base with the rig, Phil creates a diversion while you drive the Linerunner next to the small utility house next to the wall of the base and you'd use the small platform there to jump on the Linerunner's hood, then the cabin and make your way over the wall. In the final version you drive Phil's truck straight to the base, where he creates a diversion and you jump over the wall using only the utility house which now has an additional structure to make this possible. 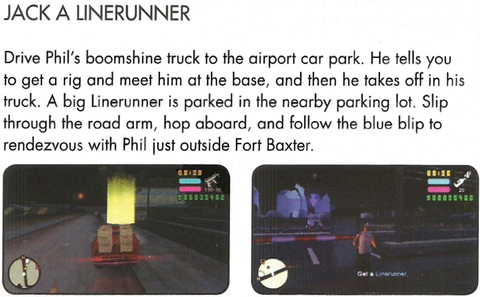 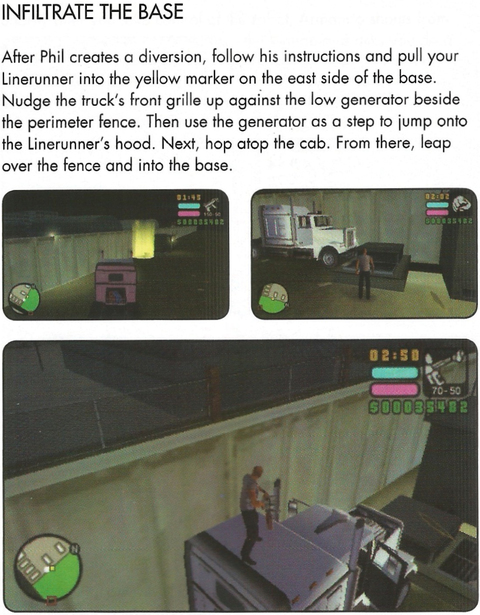 The guide claims that after landing on the roof, the rocket launcher found there contains 1000 rounds, while it contains only 2 in the final mission.
The cutscene showing Martinez arriving on the rooftop used a different camera angle.

Screenshots of the final confrontation and cutscene show multiple bodies on the rooftop besides Mendez and Martinez, which the guide doesn't make a mention of. They appear to be using enemy models seen throughout the mission, so it is fair to assume that there was either regular enemies on the roof with the antagonists or that the bodies belong to the pilot and passenger of the helicopter shot down on your way to the roof.

A whopping 25 out of the 30 Rampages were changed. The earlier Rampages seem much more difficult in general, with the guide singling #16 out as one of the most difficult.

Two Rampage locations were also changed. #4 was behind a building just west of the final location while #13 was slightly shifted around.

Seven balloons had their location changed, these screenshots also show some changes made to the map. Interestingly, the old billboard locations in the last three screenshots are identical to those found in the original Vice City.

Besides the balloon being ever so slightly moved, the building it was stuck on got a makeover. The Logger neon sign on the roof was repositioned so it faces the northeast corner of the building, though in this shot it appears to be facing the front of the building. Looking at the HUD map, it also seems like either the bridge that was added to make travel to Fort Baxter easier was not yet added or was just missing from the map.

Originally located under the dish, it was moved in a palm tree just behind the building the dish is on.

The telephone pole was removed for some reason, leaving the balloon just floating there in the final.

The balloon was moved half a block, into the overhang of the building with the vertical blue stripes.

This billboard would have been on the grass next to Lance's house. The balloon was moved under the low balcony of the small house at the end of the road.

This billboard was removed and the balloon was moved under the overhang of the building on the left.

The (then blank) billboard was moved to the other side of the road. There seems to be another billboard in the background (on the right) as well that doesn't exist in the final.

Weapon prices were also adjusted at Stonewall J's. The Downtown Ammu-Nation also sells the Scorpion and grenades $10 cheaper at $350, though this may just be a typo as grenades are listed at the correct price for Vice Point Mall's Ammu-Nation. 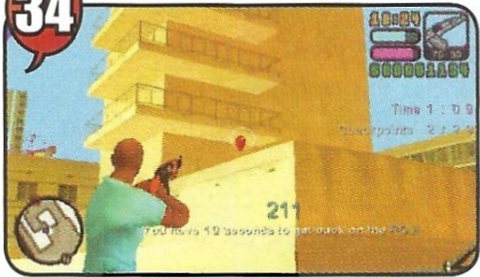 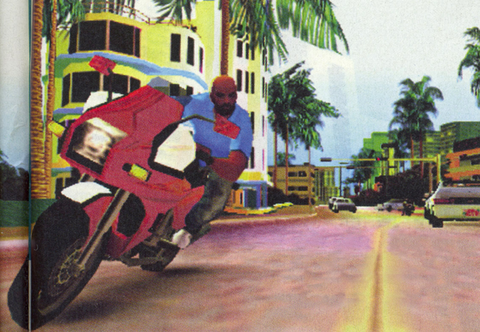 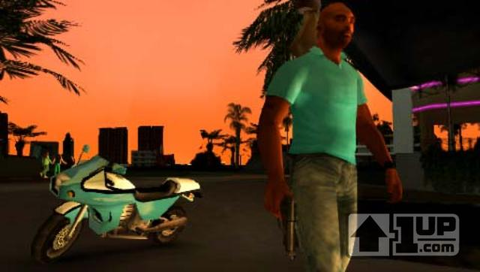