The IBM Windows PC version of Harry Potter and the Sorcerer's Stone went through a rather hectic development cycle in a rush to prepare the game for a commercial release alongside the premiere of the film in November 2001.

Following the massive worldwide success and popularity of J.K. Rowling's 1997 novel Harry Potter and the Philosopher's Stone (titled Harry Potter and the Sorcerer's Stone in the United States), numerous companies including Nintendo, Disney, Universal, and Warner Bros. made bids for rights to the intellectual property.[1] Rowling ultimately sold the movie rights for her Harry Potter books to Warner Bros., who then hired Electronic Arts to produce video game adaptations.

In their sales pitch to EA, the staff of KnowWonder decorated their conference room to look like Hogwarts, with fake potions on a table, candles on the walls, and brooms hanging from the ceiling.[2] A few employees dressed up as characters from the book, with the creative director dressed up as Albus Dumbledore, and they presented visual demos as well as level designs.[3]

The concept art below was created by Jeff Willis, who made additional art for the game.

The game was first presented to the public at E3 2001. As seen in footage of the gameplay (shown right), there were various features that ultimately did not make it into the final product. Among other things, it shows that Wingardium Leviosa would have been used to levitate items other than blocks, the player would have had to manually switch between spells through a menu, and the layout of Hogwarts was originally very different. Near the end, there is a demonstration of the Avifors spell, which ultimately went unused.

As the game was far from complete when exhibited at E3, the demo was played by someone from the development team rather than a member of the public to keep the demonstration as controlled as possible.[4] Lead artist Christo Vuchetich described this iteration of the game as a "production mess"[5] and remembered that EA was not satisfied with the direction the game was going, though he could not recall specific details why.[6]

It is currently unknown if the E3 build of the game still exists. Various members of the development team including executive producer Dan Elenbaas have denied having it and some stated it was likely discarded.[7][8][9] An EA staff member stated that only the source for the retail version of the game exists in their archives.[10]

Following E3, the project was briefly canceled before being completely restarted, by which time half the original development team had already quit. It took about 20 people to finish the game in six months.[11]

Development of the game was mostly based on the original book as Warner Bros. largely refused to give the developers access to materials related to the film adaptation. Apart from tiny thumbnails of production photos provided for reference,[12] the team mostly relied on movie materials that were published in magazines. According to level designer Ben Golus, one member of the development team was able to visit the film set and take photographs, only to have most of them confiscated. Two photos from the chess scene in the film were smuggled out, allowing the corresponding level to bear some resemblance to the movie sequence. The character Peeves has a prominent presence in the game as the developers did not know he was cut from the film until the last month of development.[13]

Vuchetich said that "We cut levels for sure, I don't recall what the levels were or why, but again, it's not uncommon to cut content before release of a game."[14] Golus stated that Gringotts was cut from the Windows version due to lack of time.[15]

In response to someone complaining about the sneak levels in a Reddit thread, Golus stated that one of the producers at EA really loved the stealth sections and actually wanted them to be longer, with more of the Hogwarts castle and even the Quidditch training grounds. Golus also stated that the two sneak levels were designed by him and made into the final game completely unaltered, whereas the Flipendo Challenge and Forest Edge levels had some puzzles simplified later on.[16]

As the game was promoted in the run-up to its release, several magazines ran large articles on the various versions of the game. Several features mentioned in these articles did not make it into the final game, including avoiding ghosts during the sneak levels and the Privet Drive level.[18]

This trailer was downloadable from EA's official website for the game. It seems to be far closer to the final version, showing only two rooms not present in the final game (about 19 seconds in). The footage seems to be from the same build as most of the pre-release images that have been made available.

The camera angle for the first line in the game was changed along with the font for the subtitles. The word "school" was capitalized for the final version. Also, the pre-release shot shows a different door texture (which is technically still used, though difficult to spot in the final game) as well as portraits different from what ended up being there.

Ron's head seems to have been adjusted slightly in the final game. The background shows a door that is not present in the final game and a different texture is used for decoration on the wall.

George's shirt was changed to green to make the Weasley twins a bit more distinguishable. Also, a comma was added in this subtitle.

Another slight dialogue change, along with the addition of some commas. The original recording of this line is present in the early dialogue archive.

The door behind Malfoy and friends looked completely different, using a rather odd texture instead of a normal door graphic.

Yet another dialogue change. The earlier version suggested that Hermione had not met Harry on the Hogwarts Express. The original sound file for this line is present in an early sound archive.

The spell-tracing section had a different particle effect, the unused Harry Potter–themed font is used here, and the blackboard, desk and chair are absent in the pre-release shot. The final game never has 60% as a pass mark, as it instead starts at 50% and increments by 15%, going up to 95%.

The Flipendo mark looked a bit thicker in the pre-release shot.

The Flipendo block was made slightly bigger and given more detail.

The HUD was changed from a rather basic display to one with two gauges for rings and time. Also, the skybox was changed and Madam Hooch was placed in the middle of the path rather than by the side.

The particles for the Alohamora spell were changed from red to blue for the final and the texture for the floor was changed.

The shape for Wingardium Leviosa was once an "M" for some reason. Also, the pre-release shot shows a requirement of 25% to pass, while the minimum passing mark is 50% in the final game. Additionally, Professor Flitwick was given a slightly taller object to stand on and the floor texture was once again altered for the final game.

Neville's face seems to have been altered slightly and he was given a Remembrall to hold and show off.

The Hogwarts entrance was redesigned significantly to look less weird, more detail was added to the architecture, and some trees and bushes were added. Ron, Neville, and Malfoy and his friends can be seen standing outside the broomstick training entrance, whereas they come out of the entrance when you reach it in the final version.

The characters' positions for the confrontation cutscene were changed for the final version.

The camera angle was changed for the cutscene where Malfoy returns the Remembrall, a path texture replaced some of the grass near the tree stumps, and the red particles were changed.

The torches in the Fire Seed Caves were given a more fitting texture rather than just being red. 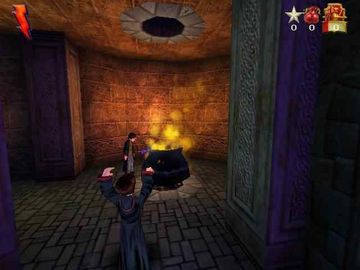 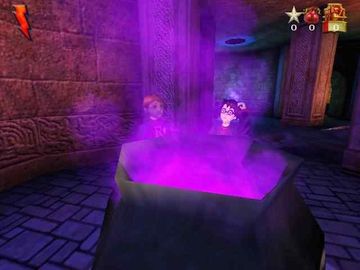 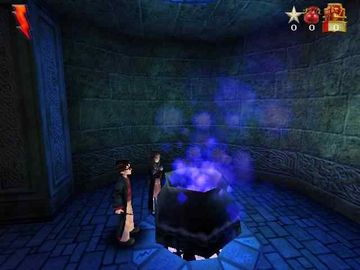 There are two shots of Hermione and Neville in the dungeon level, but their places were taken by other generic students in the final game. Ron was still included in the level but was moved from the purple cauldron to the blue one.

The Lumos platforms had more dots surrounding them at one point.

Corridor To The Girl's Washroom

The troll's model was given far more detail for the final, and it originally had a life bar during the chase part. Also, there was a save book in a rather unusual spot and the portrait was changed for whatever reason.

The Winged Key originally had a trail of yellow behind it before being given one that resembles the trail left by the Golden Snitch.

Ron seems to be absent in the pre-release shot and Hermione was further away from the entrance than in the final. Both of the pre-release images of this level seem to be missing the other Winged Keys that would chase after Harry.

A few pictures exist of Harry in what is perhaps an early, entirely different layout of Hogwarts which does not appear anywhere in the final game.

These shots seem to come from the same build as the early Hogwarts images above. The build uses the early skSmallHarry model. Harry is in a part of the common room which cannot be seen in the final game, although it is still accessible by using the ghost cheat in the Fluffy level.

The fireplace in the common room was changed to look a bit more realistic.

Several screenshots of a scrapped level that apparently involved avoiding Snape and sneaking around the dungeon for ingredients. Another screenshot of this area is used during the game's installation process, and shows Ron and Hermione accompanying Harry.