This is a sub-page of Prerelease:Jurassic Park: Trespasser.

In early 2013, a very early version of Jungle Road was leaked to the Trespasser fanbase by an anonymous member of Trespasser's former staff. This version dates back to mid-April 1998, making it much older than the version seen in Build 96. The screenshots that follow are from a version of the level that was fixed up to run with TresEd and Trespasser's engine. Originally, this map was part of a 3D Studio Max file, since Trespasser was literally built mostly in 3D Studio Max. It was converted for convenience reasons. There was also an early model of Anne that came as a bonus, complete with leg joint physics that were ultimately scrapped. This hasn't been converted yet. 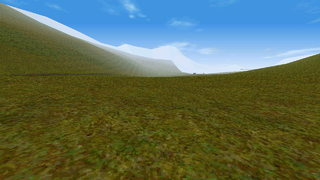 Apparently, Anne had a generic starting point at this point. In Build 96 and the final, she starts near the gates. The gates are to her left in this early version, however. To Anne's right from this point seems to be an early version of the Waterfall area (which was moved to a different location in the level later on). 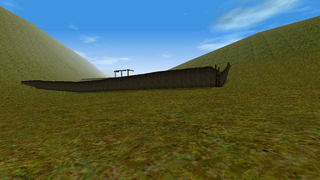 The monorail station originally had a slightly different surrounding area. Also, notice the grass here as well in this level. Much different from the grass used in the final version and Build 96. 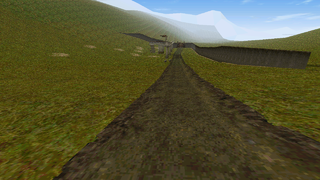 This spot looks eerily familiar... Notably, it looks like the terminal as it was featured in one of Trespasser's trailers minus objects that are clearly missing in the leaked version. It can be seen in this clip here. 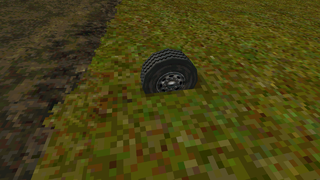 Not very far away from the terminal gates down the path just off to the side is a bus tire. Nothing terribly special about it, but it wasn't featured in the final version of JR or Build 96.

The Mayan Face and Jeep

Finally, the actual model for the Mayan Face makes an appearance. Interestingly, it's in the exact spot it was speculated to be at by the Trespasser fanbase! 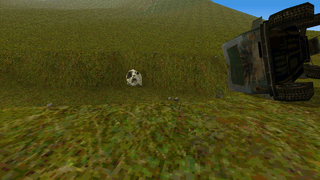 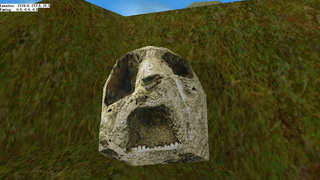 The surrounding area with the Mayan Face is strangely very different from the old pre-release image. (see the Prototype section for more details on that.) For one thing, it seems that the rocks shown in that image have either been removed or not added yet. It could also be that it never took place in the actual level file and that it was a promotional image taken in some sort of old test level. 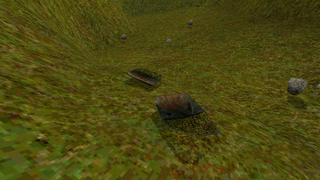 Interestingly, there are two jeep doors here. In Build 96, it was narrowed down to just one door. Then, in the final, both doors were removed.

It turns out the Hidden Valley was actually part of Jungle Road all along. It seems that after Plantation House was scrapped, the pathway was moved to accommodate this. That also meant that two voice-overs intended for this walk were left behind and unused, hence their existences in the final version (check the final's Jungle Road page for info on said voice-overs.) 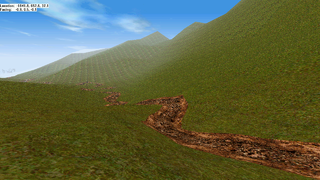 First thing to be noticed is the color of the path. It's a very bright reddish brown as opposed to the darker brown in Build 96 and the final. The path is nearly devoid of foliage. 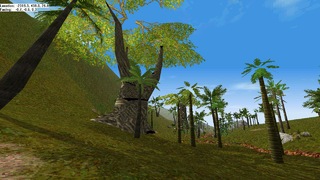 Walking a little ways down the path, foliage and trees start to pop up in an otherwise almost completely bare level. 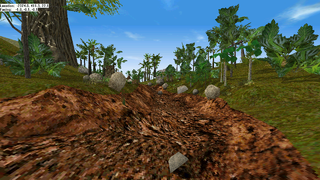 Nothing terribly notable in this screenshot other than a better view of the path textures. 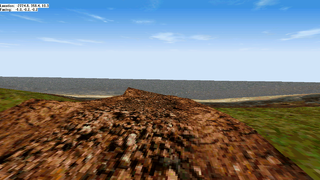 The path abruptly ends at the edge of the beach. Interestingly, this beach is mentioned in the 1997 walkthrough made to plan out the initial game. This beach eventually became Cathy's Beach once Plantation House was merged with Jungle Road. This is what the walkthrough says about its originally intended purpose:

Indeed, it is secret in this early version of the map, because it isn't easy to see until the player reaches the large monorail track portion with the skylift. The location of the path was shifted when merged with Plantation House. In the end, it resulted in two voice-overs becoming unused. In fact, taking the heightmap from this version of Jungle Road and applying it to the final version (via tresed) reveals that the unused voice-overs found in the final near the beach, line up perfectly with where the path is located in the original heightmap.

Retrieved from "https://tcrf.net/index.php?title=Prerelease:Jurassic_Park:_Trespasser/Jungle_Road_April_11-15,_1998&oldid=750652"
Categories:
Cleanup > To do
Subpages