Prerelease:Maniac Mansion: Day of the Tentacle

This page details prerelease information and/or media for Maniac Mansion: Day of the Tentacle.

There's quite a wealth of media available regarding early versions of Day of the Tentacle. This page attempts to document all the differences present between pre-release material and the finished game, such as early trailers, screenshots, concept and even the Maniac Mansion 2: Day of the Tentacle Design Document.

A few story differences are mentioned in the original design document[1].

Laverne Doesn't Get Stuck In The Tree

Laverne was going to immediately get captured by Tentacles, rather than getting trapped in the tree first. There are still some remnants of this version of the story in the finished game.

This version of the story is described in the design document: "Another Chron-O-John™ arrives high in a tree in a bleak future about two hundred years hence, which we quickly realize is controlled by tentacles as they capture and imprison this last kid" ... "The kid is immediately caged and is to be put into obedience school" ... "The kid must also get the Chron-O-John™ down from the tree it's stuck in"

According to the original design document[1], some of the puzzles were going to have different solutions.

"I don't think you should drink that..."

A screenshot found on the back of the game box[3][4] shows some differences to toxic river seen during the opening cutscene. The animated water hadn't yet been added to the scene, showing the original illustration beneath instead. This version of the river can still be seen in the files for the demo of the game. The spew coming from the pipes is unique to this screenshot, being significantly less foamy and using a simplified palette to match the animated river in the finished version. The silhouette seen to the bottom left recieved an update too. Originally the tree branch in the foreground at the bottom left was larger, but this was changed at some point before the demo was made; it was probably cut back to avoid having it protrude upward past the interface during gameplay.

Untying The Tentacles In The Lab

There are some rather interesting differences to note in a screenshot found in the July 1993 issue of Video Games and Computer Entertainment magazine[5], of the moment Dr. Fred announces he has a Time Machine. The most obvious difference is the presence of Hoagie and Laverne to the left of the scene, staring on blankly. The other big difference is that it's actually daytime outside, and the lighting in the lab near the window has been adjusted to match. The finished game takes place entirely at night, in the Present. There's also some missing detail in the shadowed area to the very far left of the image.

The presence of Hoagie and Laverne possibly indicates it's from a version of the game which lacked the brief gameplay segment which separates the three kids from each other, as mentioned in the developer commentary of Day of the Tentacle Remastered. Dave Grossman: "So the original, original cutscene was like 7 minutes before we cut it?" "Tim Schafer: "Before we added that brief, brief, tiny introduction?"

According to a screenshot found in the July 1993 issue of Video Games and Computer Entertainment magazine[5] and on the back of the game box[3][4] Laverne once had some fancy lines coming off her Chron-O-John to indicate motion, during the sequence in which she falls through the Vortex.

This was possibly changed because the lines would have looked strange if they were static in the scene, and full screen animation was considered difficult to do at the time, as mentioned by Larry Ahern in the developer commentary of Day of the Tentacle Remastered. "Nobody had full screen animation in this days. And I think, what was the deal? It was like 20% of the pixels on the screen could move at once, no more than that."[2]

Thomas Jefferson's jacket was seemingly once a brighter red colour, according to a screenshot found on the back of the game box[3][4]. Minor shading diffences (such as George Washington's left arm) can also be seen.

A screenshot found on the back of the game box[3][4], as well as in the July 1993 issue of Video Games and Computer Entertainment magazine[5] reveals that the close-up when the three Future Edisons scream got touched up a fair bit at some point in development.

The whole scene has been shaded in and some shapes have been refined, Zedna's miscolored iris has been fixed, and the background gradient is more complex. Additionally, the characters are all looking to the right (where the Skunk would be), rather than directly downwards. Also, in the early version, Zed and Ved's prison outfits had light-blue stripes on white, while Zedna's had gray stripes on white; in the published version Zed and Ved's jumpsuits were changed to match Zedna's.

The Bird seen in the opening cutscene in Consumer Electronics Show (1993) footage[6] shows a unique animation where it stops and grins at the camera, before continuing onwards to the right to choke and die. This animation is actually still present in the files of the finished game. 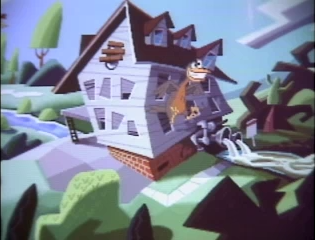 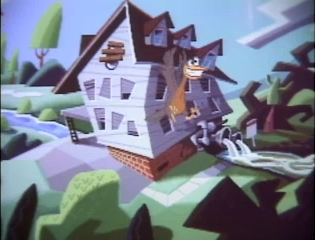 Some images of Purple Tentacle found at the top of a rough animation chart from The International House of Mojo[7] and in Lucasarts Adventurer Magazine Issue 6[8], show him doing some poses which at first look familiar, but upon closer inspection have notable differences from the ones found in the final game. It's possible these were just edited at the time the image was created, sometime after the completion of the game, but they're interesting nonetheless. 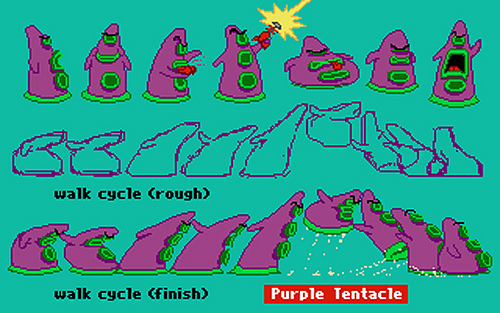 This pose shows Purple Tentacle hitting his gun in his younger years, rather than as his 200 year older self.

Thise pose shows Purple Tentacle just before he grows arms, except in this alternate version he already has arms. His tongue is positioned differently too.

This pose also shows Purple Tentacle just before he grows arms, except in this alternate version he also already has arms.

This pose shows Purple Tentacle just before he announces he's going to "TAKE ON THE WORLD!!!". One of his arms is positioned differently and he has a different mouth position.

A completely unused pose of Purple Tentacle firing his gun into the sky.

Some images of Bernard found in an image posted at some point after the release of the game on The International House of Mojo[7] show an unused pose of Bernard reading the letter and reacting fearfully. It's possible this was just edited at the time the image was created, sometime after the completion of the game, but it's interesting nonetheless. The animation of Bernard looking scared does actually appear in the files of the finished game, perhaps this is what it was intended for. 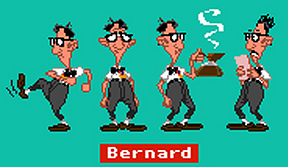 Facts about development that don't really fit anywhere else, mostly from the original design document[1].

Apparently, the game was going to have an easy mode. The "Technical Issues" section of the design document mentions it in passing "Easy mode will make a triumphant re-appearance."

Despite only having one brief mention, there seems to actually be a very small leftover of this in the finished game.