Four early screenshots of Mega Man: Dr. Wily's Revenge (aka Rockman World) were released by Capcom in early 1991 and circulated around various gaming publications. Notably, two of these ended up on the back of the box!

All four screenshots were taken from Cut Man's level, and at this point the level design is very close to the final version. However, the level art is very different – it looks more like Metal Man's stage, with gears, pistons, and flashing lights in the background.

The foreground blocks are more simply designed than in the final, especially noticeable with the floor comprised of simple horizontal lines. Note also the strange tiles to the left and right of the main HUD, which presumably acted as filler for the Boss and Weapon Energy meters.

Only one difference in object placement here: the Screw Driver enemy is closer to the wall in the pre-release version.

A better look at the revised background in this screenshot. Besides that, the lettering of the special weapon names is different, with light gray letters and black shading. The gap in the ceiling is two blocks wide in the pre-release and one block wide in the final game.

The next two screenshots come from The Official Guide to Mega Man, which offered a preview of the game.

The alternate lettering of the weapons is more clearly visible here. Other than the changed graphics, the layouts here are identical between versions.

Nothing here that hasn't been talked about before, but it's here for completion's sake. 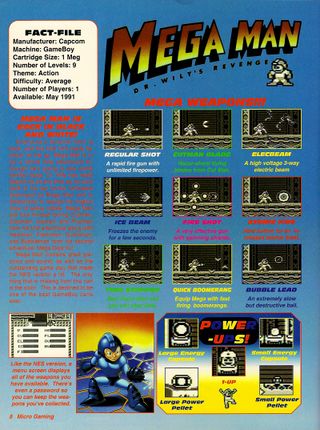 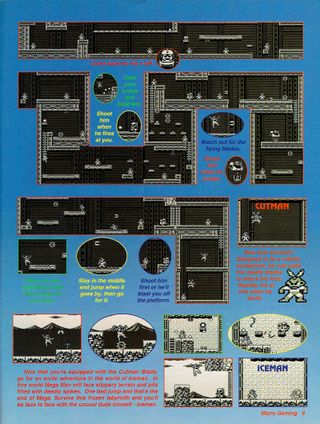 Another version of Cutman's level from Electronic Gaming Monthly #21.
This version appears to be in between the version shown in the screenshots above and the final version.