This page details prerelease information and/or media for Mega Man 4.

A work in progress version of Rockman 4 was presented in the Tokyo Toy Show in May 1991, which contained many details different from the final version.

The background in Bright Man's stage is different.

Except for the graphics, the stage is identical to the final version up to this point. In the final a 100 Watton appears after passing the pit, but here it appears earlier, which may cause a hasty player to fall on the pit.

The spiked area was visible as soon as the player entered the area. In the final it was distanced a bit, and a totem enemy was included before the Battan. The spikes have a different appearance.

The Gachappon enemy is absent in this area, and the right ladder size was changed.

This area also lacked enemies and the Life Energy item.

Dompan appeared in this area instead of Minoan.

The ladder before the second spiked area is missing.

The visible parts from the stage appear to be identical to the final version, except for the metallic tiles from this part.

Sasoreenu, the scorpion enemy in Pharaoh Man's stage, has different behavior and graphics. Instead of charging at Mega Man, it is stationary and throws bullets from its scoop-like tail.

The floor layout from the area before the sub-boss isn't present in the final release. The screenshot from the final version is the closest to the scrapped layout, but Haehaey doesn't appear on this specific part. 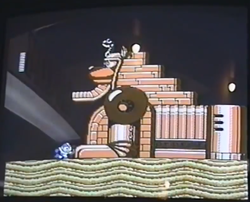 A sphinx miniboss was removed from Pharaoh Man's stage before release. It is believed that it was scrapped due to its difficulty. A few scaled-down remnants of the sphinx are present in the final version, showing that it was worked on before being cut. Its mouth opens and releases a rolling boulder, which Mega Man must use to jump on to reach the sphinx's face. The snake ornament on its head attacks by firing projectiles.

One area in Pharaoh Man's stage has a blue sky with clouds similar to Ring Man's stage. Its layout is quite different from the final version.

The next area also has a different layout.

Besides the incorrect tiles, the clouds were changed a bit in the bottom right.

Wall Cannons appears in place of the Ring Rings, and the cloud was increased on the top left.

The details from the left wall were lowered.

The details from the left wall were removed.

Small changes to the floor. Also, Kabantoncue's missiles remain on the screen after its defeat. In the final release the missiles disappear when the sub-boss is defeated.

The second part of Ring Man's stage is set indoors, rather than in outer space. Besides the different background, the area after the third sub-boss has a different floor, and the ladder to the room with Eddie is missing.

The Mono Roaders are absent in this area, and Takentetos appear in place of Ring Rings.

The floor graphics and the ladder's position are different too.

The spikes have different graphics, and as noted before, the ladder's position was changed, making this area slightly more dangerous.

The fourth sub-boss area has a different layout. In the final the sub-boss is visible as soon as the player enters the room. This may have changed to avoid the player from making the boss go offscreen, which would reset its health when it respawns on the screen. 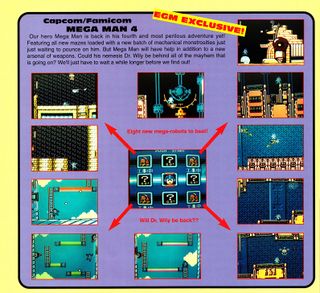 A preview from Electronic Gaming Monthly #25 showing the same version as above.

A video from the Consumer Software Group, collection '91 Autumn-Winter showcases several short clips of the game.
Several clues lead us to think this version dates from after the Tokyo Toy Show preview from above, but from before the Famitsu preview below. 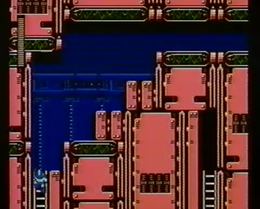 Just like in the TTS preview, this screen from Bright Man's stage is missing the Minoan enemies. 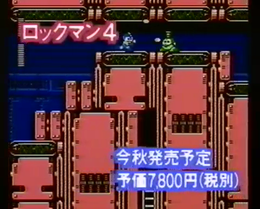 Scrolling shows us that the area is filled with Dompan and 100 Watton instead. The first buster shot bounces off the Dompan, before it dies from the second shot, a behavior unknown from in the final version.

Skull Man's stage shows the same early cloud graphics as in the Famitsu preview.
The design of the Super Ball Machine Jr. may slightly differ from the final version. It is very hard to make out, but the area below the cannon seems different, with less black and more green.

In this area from Ring Man's stage, you can find more spikes on the bottom left, while in the final version there is walk-able ground filled with Garyoby enemies and some life energy.

The destructible blocks from Dust Man's stage do not yet spawn an animation when destroyed in the preview version. They may also have a different palette.

The rain from Toad Man's stage may or may not be missing in the preview version. The palette of the ground may also differ. It is extremely hard to make out. 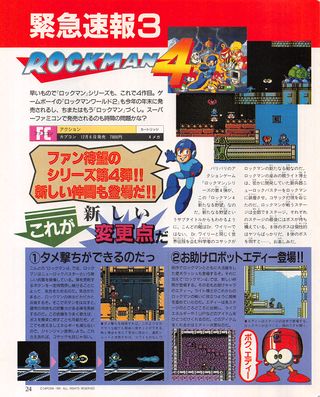 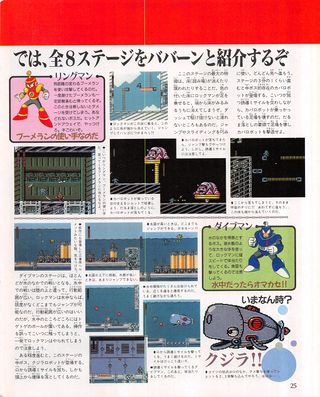 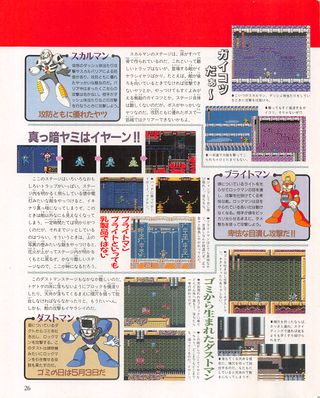 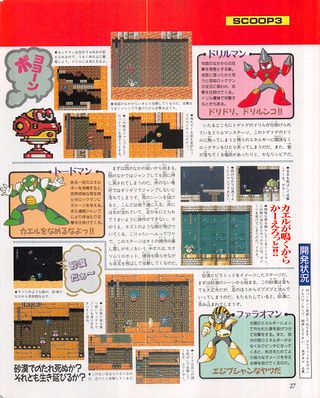 The decorative clouds in the background differ.

Both rooms' layouts differ, which in the second case, makes the fight against the Skull Joe less of a threat in the preview.

The layout of the room differs. In the preview version, notice the spikes against the first tube, which ended up on the ground in the final version. Also, there is a second vertical container in the preview, and those containers are bigger. Notice also how the bottom left most area of the screen differs. Again, the palette used for the spikes differs.

In both cases, decorative parts of the background differ. In the first screenshot, notice how the shadows are missing below the platform located above Mega Man's head.

In the preview version, the platform is red. It is green in the final version. It makes for slightly different gameplay as red platforms fall when they reach their destination, whereas green ones backtrack. 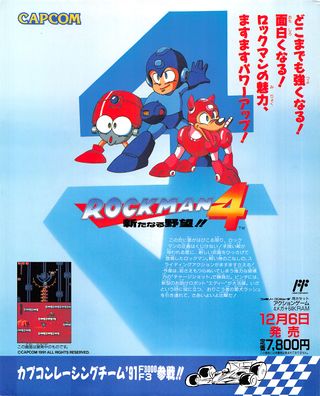 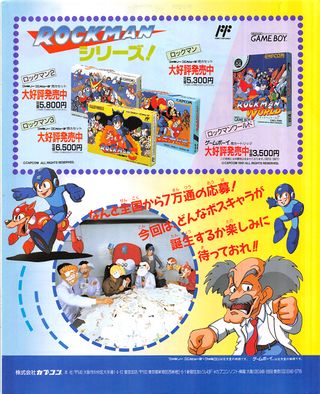 An ad found in Famitsu #151. The two screenshots differ from the final version of the game. Two clues tell us they were taken from a build similar to the one found in the above preview, if not the same build: the second platform being red in Bright Man's stage, and the shape of the clouds in Skull Man's stage.

On top of the design of the clouds being different, the preview version had an extra platform near the top right of the screen.

A promotional video by Capcom from the end of 1991, meant for video game stores screening, shows a version of the game close to the final version, but with some differences.

The ear on Mega Man's helmet is green in the preview version, red in the final. Considering that it is the same red used on the Rockman logo, it is impossible that the color differs due to a bad TV/recording combination.

An earlier version of Wily's castle. In the preview version, the forehead of the skull is smaller, the staircase in the skull's mouth is missing, the two sides differ and are more symmetrical, some of the color choices differ also.

The colors of the background differ.

In the preview version there is an extra platform, making it harder to pick up the weapon energy.

The clouds on the top left differ completely. Some detailing on the two other clouds differ also. 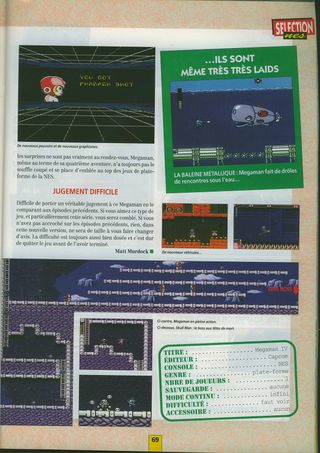 A cover of the game from French magazine Nintendo Player #011, Summer 1993. Source: Nintendo Player #011 If you check the screenshots of the scroll from Skull Man's stage with the Shield Attackers, there is an arrow pointing to the right saying "vers boss", which is "towards boss" in French. Furthermore, the E-tank and HP pick-ups are not shown. This implies that this particular area is not a dead end like in the final version but a path that leads to the end of the stage, although the ladder going up is still present so it could be a multi-path like in Cossack 4.

If you check the map for the final version of the game, you'll notice that this room is right next to another one near the end of the stage, hacking the game so that this area becomes a multi-path is quite simple:

It is however unsure whether the information provided by the magazine can be trusted. Everything else they mention is correct, but none of the other screenshots show any difference from the final version of the game.

Retrieved from "https://tcrf.net/index.php?title=Prerelease:Mega_Man_4&oldid=1289784"
Categories:
Cleanup > To do
Games > Games by content > Prereleases