This page details prerelease information and/or media for Metroid Prime.

Development initially began with a third-person prototype. Miyamoto suggested a first-person perspective instead.

A potential demo track created by ZhayTee. This was rejected for undisclosed reasons. 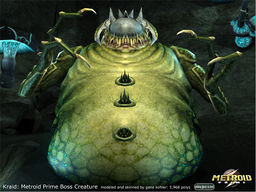 Kraid was originally set to make an appearance in Metroid Prime, but is only given a mention in the game's manual. He was completely removed from the final version. He was meant to show up in the Phazon Mines as a late-game boss, but was dropped due to time constraints concerning his implementation.

Animations for a boss, titled 'IceBoss,' originally to be used in Phendrana Drifts. According to Retro Studios modeler Mike Sneath, this creature was one of the original enemies created for Metroid Prime, and it was cut since Nintendo thought it didn't fit in the Metroid world.

Animations for a flying creature that look similar to the Flying Pirates that are found in the final game. This could have been a Flying Pirate variant or an entirely different enemy.