From The Cutting Room Floor
(Redirected from Prerelease:Portal 2)
Jump to navigation Jump to search

Portal 2 had few gameplay videos released while it was still in development. This also includes a demonstration of an early Portal 2 intro, the transforming environments and an early version of the game. Note: IGN demo consists of 3 parts

Noteable things in the demo are:

Notable things in the F-Stop opening scene are:

As seen in the E3 demo of the Aerial Faith Plate, the model was changed to what we know and love today. In the developer commentary, it is said that it changed because playtesters had trouble recognizing it.

" The faith plate was originally a robot arm model which we hurriedly placed into the maps to see if the gameplay was fun. Over time, it became apparent that playtesters were struggling to tell the faithplate apart from the standard arm, so we replaced it with a new design. It was meant to be a simple heavy weight which was flung upwards, propelling the player. The length is meant to imply a direction, so the player knows the intended flight path before they step onto it. We experimented with foot marks and treadplates on the design, but it quickly became confusingly busy, so we kept the design simple. " — Marc Nagel

The vacuum tubes that appear in behind-the-scenes areas were originally intended to appear in test chambers, as seen in a pre-release demonstration video. Objects sucked into it would either be destroyed or spit back out somewhere else. The vents can be remade in custom maps with the used tube props and standard Source entities. According to unused screens, the vents could carry a variety of objects, including the cut Hover Turret, chairs, tables, Companion Cubes, and open Fire Turrets. 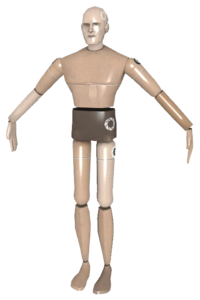 Very early in development, when Portal 2 was still F-Stop (circa 2008), mannequins were used as enemies in a similar manner as turrets. According to Portal 2: Final Hours, the mannequins were sentient robots who were to rise against Aperture Science.

Along with the F-Stop mechanics, the prequel idea, and the camera, the mannequins were ultimately cut, although one remains in a deactivated state in the turret assembly line. Sound scripts for the mannequins still exist in the final game in portal2/scripts/npc_sounds_android.txt.

Back when the game was in early development, Mel was still running around Aperture as the protagonist, and Cave Johnson replaced GLaDOS. The Gyroscopic Liability Absolver and Disc Operating System (otherwise known as Betty) was to introduce the player to new test chambers. She would "roll out after [Cave Johnson] had described the test" and void Aperture Science of any liabilities that may be found during testing. As shown in the image, the early model for Betty was a small morality core attached to a desk lamp with wheels.

Interestingly, the acronym of her name (GLAaDOS) was to be the only reference to GLaDOS, the antagonist from Portal and the final version of this game.

Mel was originally to be the main protagonist of Portal 2 before being moved to multiplayer and, unfortunately, eventually cut altogether. Her only valid instance of her appearance (physically) is from a retexture of a Chell model from the original Portal. Her appearance was that of a blue-eyed, blonde haired woman with a light blue jumpsuit, pink gripped Advanced Knee Replacement units, and a Caucasian skin tone. Though she and Chell were meant to appear in multiplayer, they were eventually replaced by Atlas and P-Body.

When Mel was still the main protagonist, it was found that playtesters became disappointed at the fact that GLaDOS didn't recognize them. After being changed to a multiplayer character, the consequence of dying without respawning often made playtesters afraid of experimentation. Thus, Chell was re-introduced as the main protagonist. Atlas and P-Body were used for multiplayer, and were shown being taken apart and re-assembled in different areas to help players (and playtesters) overcome any fear of not being able to respawn. This also creates a reasonable excuse for being able to respawn.

A possible early version of Mel is seen in Portal 2: The Final Hours as a random character in an early jumpsuit design for Chell in Portal. This character had a different face and overall younger appearance than Chell, and is therefore assumed by many to be Mel. Her placeholder texture is still in the game and separate from those of Chell, but lacks animations (although they are specified, they don't exist anymore).