This page details prerelease information and/or media for Skullgirls.

Skullgirls is notable for its lengthy development history, and was initially named SkullgirlS during its earliest stages in development.

The conceptualized lore for SkullgirlS is radically different from the final incarnation's. The original lore mentions a Black Tree which isn't present in the Skullgirls lore. Marie also dies in the original lore and is brought back to life as the Skull Girl by the Skull Heart, while in the final she is given the Skull Heart by Double. Another part of the SkullgirlS lore which was excised from the final is mention of a "Temple of the Skull Girl".[1] The early lore includes no references to the Medici Mafia at all, meaning early on they most likely didn't exist, however an unnamed mafia is mentioned in Squigly's early back story.

Extremely old concept art of Filia depicts her as a female mannequin monstrosity with a mouth on the back of its head. Later designs more closely resembles her final design, albeit with most of them featuring her with a tattered skirt.

Some of Filia's old concept art also shows her wielding swords shaped like hairpins, which are absent from her final design. A document by Alex Ahad mentions that Filia was intended to have a chargeable hairball special.

Peacock was originally envisioned as a darker character, but was changed at some point in development to be more cartoony and lighthearted. Design-wise, her hair was more unkempt and her hat was more stiff than her final design. A video of an early build of SkullgirlS shows her punching and kicking, something which she doesn't do in Skullgirls.

A reference sheet circa 2008 shows Peacock's parasite Avery, named Patty Peacock on the sheet, wielding a tommy gun while on a spring. Judging from the nature of this attack, it was probably an early version of Peacock's c.HP. 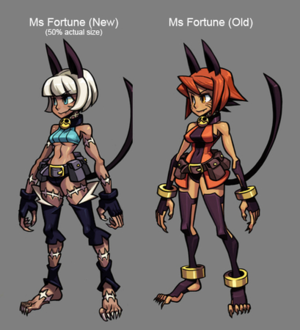 Comparison image of Ms. Fortune's original design and her redesign

Ms. Fortune's name during the SkullgirlS stage was Miss Fortune. A rather pointless change. Ms. Fortune also had a redesign during Skullgirl's development to better emphasize her fighting style. According to an interview, her redesign originally had pants.

"...Over time, the concept extended to her full body being detachable. She had a previous design, but to accommodate the full body element better, her design was changed.

However, I wanted to make sure the current design at least had some similar vibes to the old one. Among the cast, she was the more “athletic” type, so I kind of wanted to give her the pants + halter top / tank top look. It was influenced by characters like Blue Mary and the thief from Dungeons and Dragons: Shadow Over Mystara.

However, her pants ended up having to be cut up in order to accommodate and properly emphasize the scars." - Alex Ahad[2]

Painwheel was less detailed in the SkullgirlS stage of development and the blades on her back more closely resembled a pinwheel.

In very early concept art, Double was designed as a humanoid creature. This later changed to her being a mash-up of the cast topped with a crown, to her final, more monstrous form. Her "Beast of Gehenna" Blockbuster was originally intended to have been a command grab. [3]

According to an old Livejournal post by Alex Ahad, six additional characters were considered. These included a character named Aesil who would have originated from a dream world connected to Earth, and a character called Silverlocks who would have sought the Skull Heart to revive her dying ranch. The only character out of these six who remain canon to the final build is Annie. [4] Another character named George appears in concept art included on the Digital Art Compendium.

At one point, it was planned for the playable characters to have super modes.[5] For example, Squigly acted more like a traditional zombie and used Leviathan as a weapon, while Leviathan himself took on a more draconic form. Concept art of Squigly's zombie-like super mode shows an attack which resembles her final Arpeggio, and a biting attack which she lacks in the final that would have healed her.

When a Blockbuster is activated, the screen is tinted bright yellow for the beginning duration in most pre-release footage. This was changed to darkening the screen in a later build until finally tinting the screen sepia like in the final. The final version also has the portrait of the character whom activated the Blockbuster appear on a film reel.

After the brief red tint, the screen does not darken during the rest of the duration of Valentine's Forbidden Procedure Blockbuster. Note that the change of her crosses from red to magenta was not a change from the pre-release version, but a change brought about in the final version through a patch.

Several animation were never implemented into the game. Two of Filia's animations were unimplemented due to objections from Mike Z because he thought they were too inappropriate, while Peacock's animations were cut because they took up too much of the file size for the console releases. It is worth noting that a frame of Peacock's unused intro animation was used in the final for Double's Bandwagon Rushdown Blockbuster and later used as one of her specials in Skullgirls Mobile. These unused animations were later included on the Digital Art Compendium, which was made exclusively for backers of the 2013 Indiegogo campaign who pledged $80 or more.

Footage from a pre-alpha build dated 8-9-10, and one of the first videos showing footage of the game under its finalized Skullgirls moniker. The footage shows primitive versions of the Streets of New Meridian and Lab 8 stages. It also features a ruins stage that doesn't resemble anything seen in the final build. Judging from the skull motif in the background, it was probably an early version of the Final Atrium.

During 2011 and 2012, character trailers were uploaded to YouTube. The 2011 trailers appear to have been filmed in a build predating any of the builds from the alpha build compilation video.

A video showing gameplay footage of some alpha builds. Gameplay-wise, it is near identical to the final version, but it still has some differences.