This page details prerelease information and/or media for Sonic Boom: Rise of Lyric.

Sonic Boom: Rise of Lyric had a number of development troubles. The most damaging was likely the sudden shift to the Wii U, as CryEngine 3 (the game's engine) was not optimized for that platform. That, and the fact CryEngine 3 was designed for first-person shooters rather than platformers.

The final game was ultimately rushed out the door, where it was greeted with a highly negative reception from both fans and critics.

Character animator Tuan Nguyen created a number of animations for the game, some of which are shown here. In his demo reel, the hub world is much more detailed than what could be achieved in the final game. Judging by the high quality of the hub world, this was most likely running on a Windows PC. It was confirmed that the Hub World was actually a Test Level in a YouTube video called "Sonic Boom: Where Did It All Go Wrong?"

Martin Ocejo, one of the people who helped model the hub world, has shown screenshots of it on his ArtStation account.

The first trailer was released in February 2014, but due to the amount of differences compared to the final game, SEGA's YouTube channel made the trailer video private. Many YouTube users re-uploaded the trailer.

A demo was released at E3 2014. It is close to the final version, But there are many differences. Only 4 stages were playable. 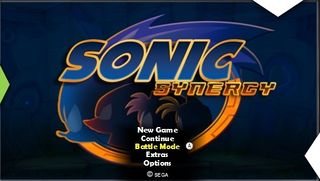 During development, Rise of Lyric was called Sonic Synergy. This mockup title screen was created by user interface design consultant Edward Moore, and used in a diagram to show how user interactions between the Wii U and 3DS would work. There are also numerous other UI Designs found.

Mark McCall's show reel for Rise of Lyric contains far more complex lighting in many of the cutscenes. It also has a 360-degrees rotation around the hub world, while focusing on the enemies. Different portraits for the characters are also used in the video. A video showing rigging in process was also uploaded to Vimeo. Dimitri Frazao, another character rigger, posted a video on Vimeo featuring all the characters models, with a few of them using an unused animation. He also has a rigging reel, containing rough versions of several cutscenes and some videos of the rigging in progress. Vimeo user Arlington Cruz also uploaded a few rigging shots, but those were removed for unknown reasons. It was reuploaded by Derek Crumb on YouTube and it features a plane diving animation possibly going to be used during the removed plane level. It also contains an odd Sonic throwing animation and an animation of Amy waving goodbye.

A "Sales Presentation" trailer was made by Michael Horwitz in 2015, but was deleted from Vimeo sometime after April 2017. This is the most drastically different version of the game. Almost everything seen in the trailer is not in the final game. At this point, the title was still "Sonic Synergy". An extended version of the trailer with different footage has also been found and uploaded.