From The Cutting Room Floor
< Prerelease:Sonic the Hedgehog (Genesis)
Jump to navigation Jump to search
This page contains changes which are not marked for translation.
Other languages:
English • ‎polski

This is a sub-page of Prerelease:Sonic the Hedgehog (Genesis). 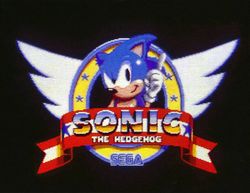 The debut of Sonic the Hedgehog occurred at the Tokyo Toy Show in June 1990, a full year before its eventual release. Only about a dozen low-quality screenshots remain of this obscure build, with most context derived from vintage magazine coverage and developer interviews. 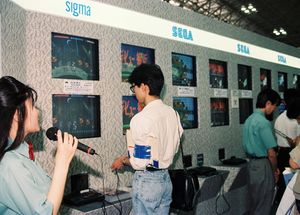 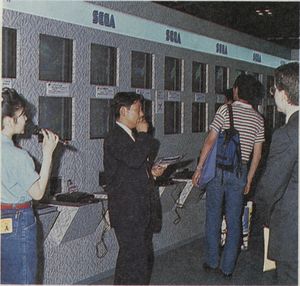 The demo can be seen running in two newly discovered photos of Sega's booth at the toy show, and its screening can be seen (barely) in the only publicly-known footage of the toy show that shows Sega's booth. Naka appears to be correct on this point.

The recently discovered image on the right shows a controller conenected to the console that is running the demo, though it doesn't necessarily confirm that the demo was playable.

Also, during the above GamesRadar interview, Naka claimed that this demo was slated for inclusion in Sonic Mega Collection, but Sega had apparently lost the original binary. 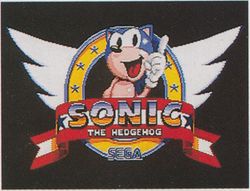 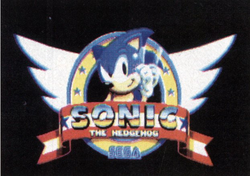 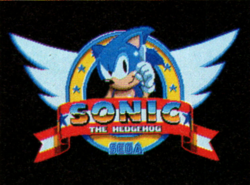 The demo's title screen. The solid black motif seen here was quickly done away with, although the overall look survived intact in the Master System and Game Gear versions' title screens. In addition, though not obvious, large portions of this graphic were redrawn by the final game's release.

In this version of the title screen, the letters are differently sized, the ring surrounding the title screen shows more at the bottom, and Sonic's facial expression is different. His spines are also shaded differently, making them appear flatter and more "mohawk"-like. There is also no trademark symbol or copyright notice. 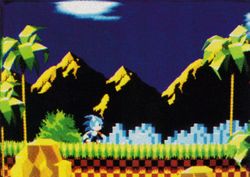 The demo begins with Sonic standing in what eventually became Green Hill Zone. Unlike in the final game, the background features large mountains and some unusual blue structures, likely buildings based on some early concept art by Naoto Ōhshima.

Magazine blurbs claimed that this demo featured seven layers of parallax scrolling, including palm trees and boulders in the foreground. These foreground objects would not make it to later public appearances of Green Hill.

Note the overall blurriness of this shot - particularly the clouds, suggesting they scrolled from right to left. Scrolling clouds were gone from Green Hill in the original US release of Sonic, only to be added back in for the Japanese version, released shortly afterward. 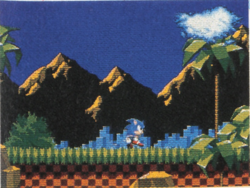 Sonic begins walking through Green Hill. Given the position of the background, the stage layout, and the foreground elements present, this seems likely to be shortly after the shot above; oddly, the clouds seem to overlap the trees in this build. 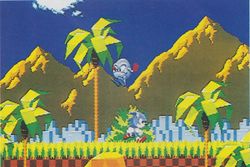 As Sonic continues to the right, he gets attacked by a hopping blue enemy creature wearing red gloves. Its design (but not its color scheme) was taken, again, from Ōhshima's concept art, and was never seen again after this demo.

The apparent color of the sky is wildly inconsistent due to the various sources of these screenshots, but it may have been a darker shade of blue compared to GHZ's sky in the final game. 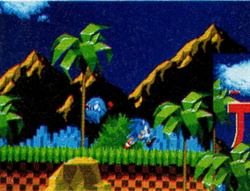 A few frames later. This image, though seemingly inconspicuous, may actually be quite revealing when compared to the previous screenshot.

First, it contains more evidence of right-to-left scrolling clouds - the camera has hardly moved since the previous screenshot, yet the cloud in the upper-left corner has shifted to the left.

Second, this image gives credence to the possibility that the demo was automated, and not player-controlled (see above). It seems to depict the exact same run, by the same player, as the previous screenshot. (The cloud, of all things, confirms this.) Since these two screenshots were published in different magazines (and presumably captured by different journalists), it casts doubt on the likelihood that the TTS '90 build was actually playable. 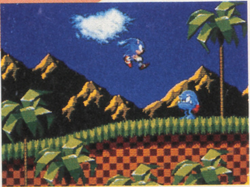 Sonic encounters another hopping blue enemy with red gloves as he climbs the hill, this one standing in place at the time the shot was taken. Based on his movements in this and the next shot, as well as the text accompanying the next shot in the magazine it originally appeared in, it seems Sonic is jumping to avoid the enemy in his path. It seems no unique sprites were assigned for jumping at this point, with Sonic remaining in his walking animation instead. 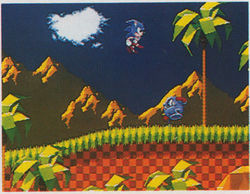 This seems to be just after the above shot - Sonic has ascended slightly higher into his jump arc and travelled closer to the tree, the enemy has begun jumping upwards towards him, and the cloud has now scrolled slightly further to the left. 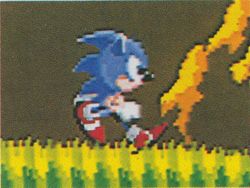 A close-up of Sonic as he begins to descend the hill. 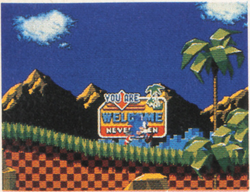 As he travels down the hill, Sonic passes a large, flashy sign. Unfortunately, in both existing shots of this segment Sonic is partially obscuring the text on the sign. Assuming the characters at the bottom row are all same-width, it's likely at least three characters are hidden behind his head. However, Yuji Naka confirmed that the hidden characters are R and SE. What can be seen reads as follows: 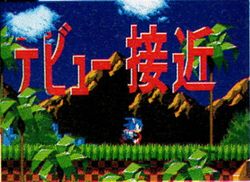 In what is likely the end of the demo, Sonic appears to run beneath large red Japanese text floating in midair, which says デビュー接近 ("debut approaching"). Though it may look like this text was edited in by the magazine, some trees and a cloud can be seen slightly obscuring the first two letters, which suggests that the text was actually part of the demo. 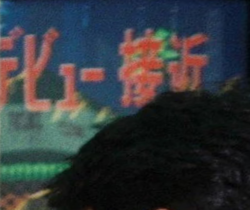 This shot was cropped from a photograph of SEGA's booth at the June 1990 Tokyo Toy Show, in which the demo can be seen running on-screen in the background. This appears to be a few frames after the last shot, and confirms that the red text was indeed part of the demo itself. The stationary nature of the text may imply that this was the original function of the unused Object 06 found in the existing prototype, which generates a static red object that moves with the HUD.

This is another off-screen shot of the demo from a photograph at the Tokyo Toy Show - however, unlike the previous image the screen contents have come out dark and unclear. To aid visibility, this cropped image has been modified to increase its brightness and contrast. It is unknown which area of the stage this shows - two trees can be made out to the right-hand side along with a tall mountain in the background, along with a dark shape which may be a bush. This layout is similar to the area seen in the third and fourth screenshots above, meaning it's possible this could be another image of that same area.

The sprites of Sonic shown at the Tokyo Toy Show went through some changes for the final game.

His title screen sprite shows off a bit more 'tude in the demo, and sticks closer overall to Ōhshima's original concept art.