E3 2000 kicked off on May 11th 2000, and Spyro 3 was first revealed at the event. The game had a playable demo featuring at least six different levels, but hardly any images or footage of the event have ever surfaced.
Fortunately, several publications obtained a version of the game which seems to have been a match for the one used at the event.

Looking over all the sources of information for this build, the table below lists which levels are the ones known to be present at this point in development. There are likely other levels which were not shown in any of the known pre-release materials.

There isn't much information about the build seen at the booth, but all the materials we do have shows what appears to be a build identical to the one shown by a number of different publications. Given that the build was likely handed to said publications a while in advance, the possibility that the build was used in previews seems likely. This is further supported by the fact that an interview in May 2000 shows a slightly further updated version of the game than the one seen in said previews, suggesting those previews feature a build from April - May 2000, which lines up with the E3 build.

According to IGN's E3 2000 Wrap-up, the Sunny Villa skateboarding level was the "centrepiece of the game's show floor demo".

The Playstation Underground Volume 4.2 Disc 1 disc contains a short clip of interview footage with Ted Price, filmed at E3 that year. In the video, Cloud Spires is clearly seen playing in the background. The main noticeable difference here is that all three sun seeds are sitting in the lava, instead of only one at a time.

B-roll clips are also shown interspersed throughout the footage. While this would not necessarily be the same build as the E3 event build a priori, analysis of the B-roll build suggests that it too is likely an identical build to the E3 event build.

An extremely short clip about 9 seconds into this video shows Spooky Swamp, Country Speedway and Bamboo Terrace. Most notably, the tiger enemy in Bamboo Terrace is seen to still be present.

The small amount of information we can infer from photographs is that Spooky Swamp - and possibly Molten Crater and Lost Fleet - were playable. Once again, the egg icon and counter were not part of the HUD at this point.

We can also see that the camera generally appears to focus the player in the middle of the screen, like in Spyro 2. By contrast, the camera appeared slightly higher up with Spyro in the lower half of the screen in later versions of the game.

It's also worth noting that the logo seen above the screen as well as the logos seen in footage and photographs of the outside of the booth is one used earlier on in development, so it's likely that the logo hadn't been finalised at this point.

For the purposes of observing differences and identifying levels, each of the screens seen in the event screenshots have been compared to screenshots from the final game below:

Several different news outlets were sent early builds of the game to report on, and in the SCEA region, it seems that the most frequently used preview build was one matching the E3 event build. On June 23rd, most of these outlets released their previews of the game, often with plenty of videos and screenshots of the game, as well as the occasional developer interview.

IGN was one of the outlets which reported on the game on this date. A variety of levels are seen to be playable in this version, though an article from June 24th, 2000 explicitly claims that the Sparx levels were not yet playable. They may have still existed in the game in some form, however. 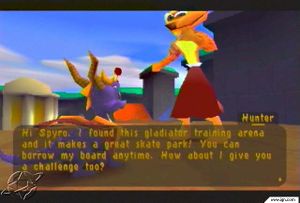 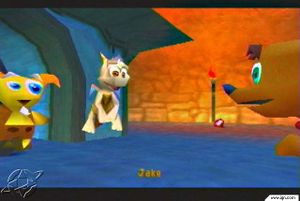 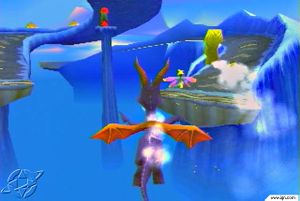 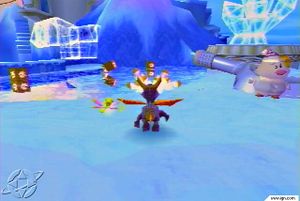 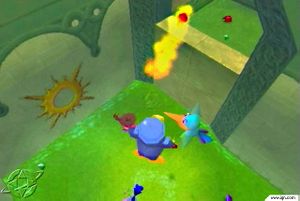 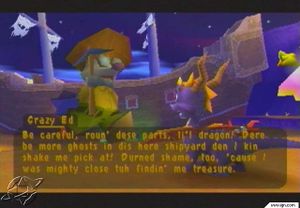 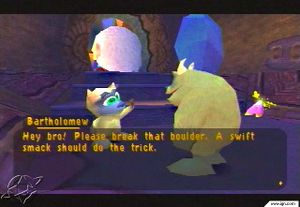 On June 23rd the Gamepro website released a variety of screenshots, a preview article and an interview with Insomniac head designer Brian Allgeier. Most of the screenshots were not archived and so are currently lost.

The interview gives a few interesting insights into a couple features that were planned for the game but ultimately cut, as well as what some of the motivations and influences were for the team.

In 2018, he clarified in a tweet what some of the functions of this Atlas feature were going to be:

While the final game's Atlas featured the ability to see which eggs you'd collected and which you had left to obtain, there was no 'family' element (unless they were referring to the dragons' colors, which can't be viewed in the Altas anyway) nor was there any way to view the dragons' personalities beyond the animations seen when they hatch from their eggs. Since the egg color and design seemed to go through several different iterations at this point - with eggs appearing to be different colors when held by egg thieves, for example - perhaps it's the case that there were multiple egg colors corresponding to each 'family' of dragons.

"Gramps" - whichever dragon that refers to - did not feature in the final game. Whether this was a misunderstanding on the part of the interviewer, a mistake on Brian's part or something that was removed from the game is unknown.

Interestingly this interview is another case of the claim that there are "over 140" dragon eggs rather than simply saying 150. It's possible that a number of eggs towards the end of the game were still tentative and may have not been added had the time constraints on the game been greater. 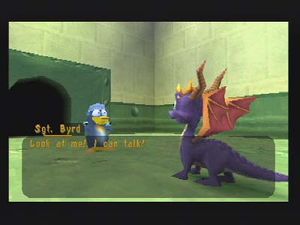 Sgt. Byrd has some different dialogue. And a lot less of it, too.

A few screenshots of the game were released by Daily Radar on July 5th. Some videos were released on the site, too, but they were not archived and are thus currently lost. Judging by the file names the same levels seem to be accessible as the ones which are accessible in IGN's build of the game.

The article here claims that "There are a total of 140 lost baby dragons". This contrasts with the final 150 dragons, so perhaps in the version they had access to, there was only evidence for 140 eggs. On the other hand, they might have been told that there were "over 140" like in other previews and interviews, and they misinterpreted it as meaning 140. 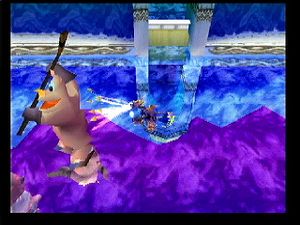 The hockey player isn't wearing his hockey outfit, in this build. His stick is textured differently, too. There are unused sprites loaded into memory in Icy Peak in the final game which resembles this variant of this rhynoc. 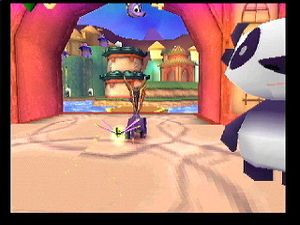 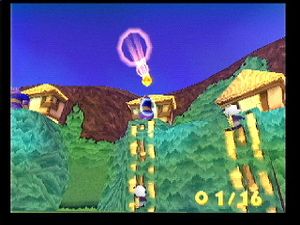 The life and gem icons are seen moving onto the screen in the first image. They don't usually do this at this specific point. The egg icon is still absent. The power-up gate is completely missing, too, as is the superflame meter in the second screenshot. We also see that, initially, there was a counter present showing how many of the rhynocs had been hit. It appears as though the icon next to the counter uses the 0 sprite as a placeholder. Animation sprites for an icon which would be used here are present in the final game, but they go unused. 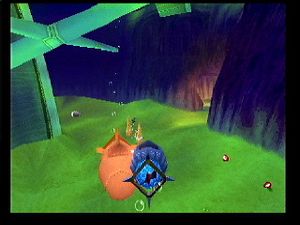 Once again no counter is present in the bottom right of the screen representing the number of enemy subs left, despite the fact that a submarine is clearly visible in the screenshot. The mouth at the exit next to the power-up gate is still missing. 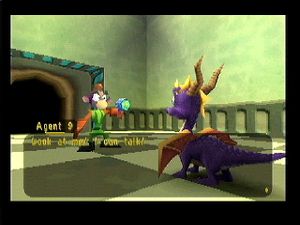 Is anyone else getting déjà vu? Agent 9's dialogue is different to the final game, and it's identical to the dialogue Sgt. Byrd uses in Gamepro's preview.

PSM's September 2000 issue has a screenshot of a differently-colored egg than the ones seen elsewhere in this version. Later screenshots - the GameSpot ones, specifically - also feature golden eggs, but the egg itself is never seen; only the shell fragments it leaves behind are. This, combined with some green eggs seen held by the thieves in the IGN footage, suggests that eggs came in several different colors in this version (perhaps indicating the cut "families" feature mentioned by Brian Allgeier).

The same magazine[1] article refers to Cloud Spires as its earlier name, Cloud City, and the dragon seen in the image, Tupac (another one of Insomniac's musician references), is called LuLu in the final build. The "uh... cool" texture on the weights in Sgt. Byrd's Base is still visible, too, and the egg icon in the HUD still isn't present.

A couple of sources of the game's B-roll shows a little bit more of this version of the game.

In October 2000, the Official US PlayStation Magazine released a demo disc containing a trailer of Spyro 3. Despite being released in the same month as the final game's release, the trailer seems to match IGN's build of the game (and in fact the disc itself was built in late June). In particular, one of the dragons seen in the video has the same name as it does in the IGN version, despite the fact that dragon names changed a lot during development, so at the very least they're closely related builds. Several differences that weren't seen in the IGN release can be seen.

Interviews of the developers of Spyro 3 - as well as more of the same B-roll footage seen in the above clips - reveals some interesting insights into the game's development. The Spyro section starts around 7 minutes into the video. Judging by a calendar in the background of one of the shots, this footage was likely filmed in May 2000.

It's worth noting that even though the B-roll is shown throughout this video, the occasional clips of development versions of the game are certainly not from the same point in development, but rather a later one. Several level models are shown to be currently in development, and a short clip of Icy Peak shows that the Rhynocs in the ice dancing sublevel are now taking on their final appearance, rather than the earlier one that had already been seen in the B-roll - meaning that this interview footage was likely filmed a little while later than the build date of the version used at E3.

Retrieved from "https://tcrf.net/index.php?title=Prerelease:Spyro:_Year_of_the_Dragon/E3_2000&oldid=1010863"
Categories:
Cleanup > To do
Subpages