Gamespot was one of the multiple websites that released screenshots, videos and previews of the game on the June 23rd, 2000 embargo date. The version seen here is much later than any of the other preview versions covered on the same day, though, likely due to Gamespot receiving the game later than other outlets. It appears to be a similar version of the game to the earliest demo, and despite the fact that the Gamespot Build uses a different egg shell texture to both the earliest demo and the final game, there is evidence to support the idea that Gamespot's build is actually later than the final game. Many of the screenshots are no longer present on Gamespot, and all but one of the videos they hosted have been removed. While the screenshots were later hosted on other websites and so were never lost, it does not appear as though the videos were archived internally, and the WayBack Machine does not host archived versions of these video files, so it is likely that they are now lost forever. 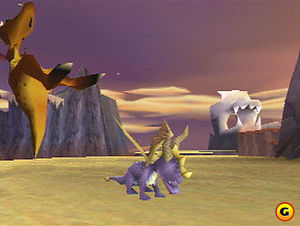 An unusual screenshot showing an early title screen for the game. It's almost identical to the Spyro 2 title screen, but Skelos Badlands is only partially visible and there's no logo in sight. Clearly this was just leftover data being used as a placeholder. 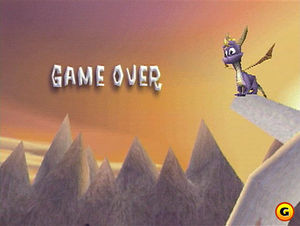 The game over screen is also shown to be a Spyro 2 leftover at this point in development. This might not be a surprise, seeing as how most of the demos also use this screen. However, the third of the six demos uses a completely different demo screen, so this screenshot confirms how the game over screen looked at (at least) this point in development. 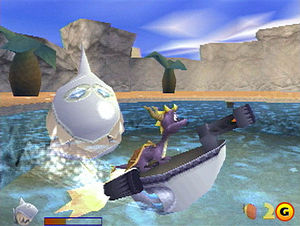 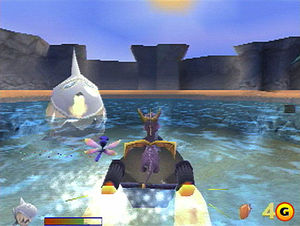 The gem placement changed a lot during development, so often the gem changes early in development really aren't very interesting. In these screenshots, however, absolutely no gems are seen underwater or on the shore. It's possible that there wasn't any gems present here at all, which would make quite a significant change from the final game (and even from the earliest demo of the game). On the other hand, it could be the case that the player has already collected the gems, but normally you can't do this until after Bluto has been defeated. It may also be the case that Bluto was defeated, the gems were collected and the player returned to Seashell Shore to defeat Bluto for a second time when the screenshots were taken. 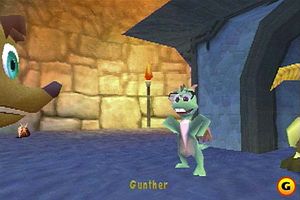 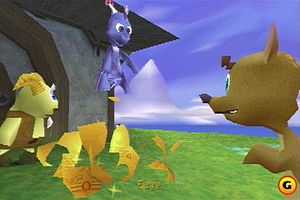 In the first screenshot, we can see that the dragon previously named "Jake" is now called "Gunther", still differing from its final name of "Jenny". However, unlike the last screenshot of the dragon, it appears to have its final model, texture and animation. The second screenshot is significantly more interesting; the egg shells suggest that eggs finally have a hatching animation. Rather than being a plain gold or purple like previous appearances, or green like the ones held by the thieves in the IGN Build and shown in the HUD in this version, the egg shell is gold with some intricate patterns on it which don't match the final look of a more natural egg - rather, it looks like some kind of ornament.
Interestingly enough, as mentioned on the main page, these gold shell fragment textures exist in the final game too, and every egg releases one fragment using this texture, perhaps by some kind of glitch. Due to the way the fragment is released, it's usually unseen to the player.
The hatched dragon is called "Faye" in this build, as opposed to its final name, "Nan".

Gamespot released five videos of this version of the game but most of these videos have been deleted from their servers. The one that remains shows Sgt. Byrd's Base. The most noticeable differences are an apparent transparency glitch that turned all the windows completely black, Sgt. Byrd's early texture, and the early version of his theme once again. We get to hear more of the theme than before, and it's apparent that there are some loud guitar riffs in the second half of the song that were completely absent from the final version. 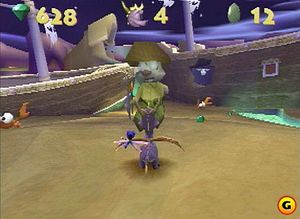 The egg HUD icon (specifically the green one seen in the earliest demo) is now present, and the sequence where Crazy Ed runs up to Spyro now matches the final one. It's strange that the player only has 12 eggs at this point as usually it would be impossible to reach this point with so few eggs. This could suggest that not only is a level select present in this build - which isn't at all surprising in a preview build of the game - but also that eggs, gems and the hits the player has taken are saved over from other levels the player has been to, a feature which isn't present in the demos and doesn't appear to be present in the earlier preview demos. This - combined with the presence of a title screen - means that this was probably a mostly fully playable version of the game (instead of just a demo), just not a complete one. 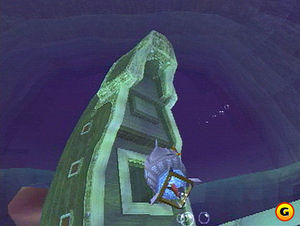 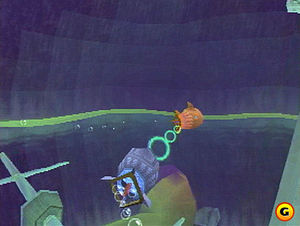 Like in the previous screenshots, no counter is present showing the number of remaining subs. 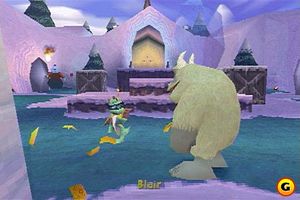 The gold egg shell can be seen again. The dragon is named "Blair" as opposed to "Charlie". Interestingly, unlike almost every other early screenshot or demo of the game, the gems actually appear to be in their final positions, so maybe this was one of the first levels to be completed. This is supported by the fact that in-game data in the final version suggests that it was one of the earliest levels that was worked on, likely the fifth level to start development (after Bamboo Terrace, Spooky Swamp, Lost Fleet and Frozen Altars). 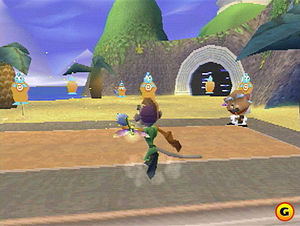 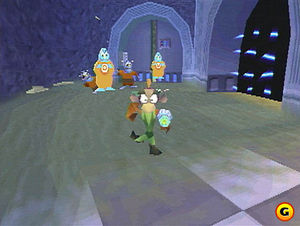 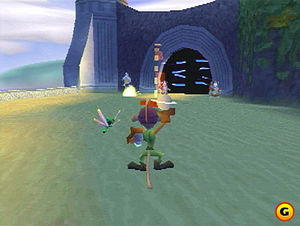 Once again transparency issues are seen despite earlier previews showing that the forcefields worked fine. In the second screenshot, the panic switch on the wall is grey instead of red, but it doesn't appear to be destroyed. Recall that it appeared as though the switches were red and textureless in IGN's version - the Professor mentions the panic switch as being red, so the choice of making it grey seems strange - perhaps that's why it was changed back to red some time before the second demo of the game (only the working switch was changed back; the broken switch was changed back to red in a later version of the game).

It's still not confirmed which came first - the earliest demo of the game or Gamespot's build. On one hand, Gamespot's build uses an egg shell texture which is clearly wildly different than both the final version of the game and this demo version. However, as mentioned on the main page as well as earlier on this page, every egg in the final game releases exactly one shell fragment using this texture, for some reason. This statement is true for all the demo versions except for the earliest one. If the Gamespot version was really earlier than the earliest demo, then why would the texture randomly crop up again later on, despite already being removed?

One explanation for this suggests that the Gamespot Build was actually later than the earliest demo. The developers may have decided to switch the egg texture from the one seen in the final game to the gold one seen here some time between the first demo and the Gamespot version, and then later on changed it back - but in changing it back, they might have accidentally left the texture on one of the fragments that spawns during the egg hatching animation. Not only does this explain why the texture is present in the final and why it's missing from the earliest demo, but as the Agent 9's Lab section above discusses, it's not unusual for the developers to change the design of an object (like the panic buttons) before later on deciding to change it back, which supports this hypothesis further.

Retrieved from "https://tcrf.net/index.php?title=Prerelease:Spyro:_Year_of_the_Dragon/Gamespot_Release&oldid=1018970"
Categories:
Cleanup > To do
Subpages