This page details prerelease information and/or media for StarCraft.

Early versions revealed at E3 1996 shows that StarCraft was originally based off the WarCraft engine. The game shows graphics similar to WarCraft II: Tides Of Darkness, such as the dashboard on the side, rather than on the bottom like in the final version. According to media, it felt too much like WarCraft II, with fans often calling the game "Orcs in Space" or "Purple WarCraft", among other variations. Due to criticism, Blizzard started reworking on the game, with a new engine.

A late July 1996 teaser of StarCraft came with a WarCraft II rerelease. The slide show explained the game's features and the story. It is often wrongly dated to 1995. 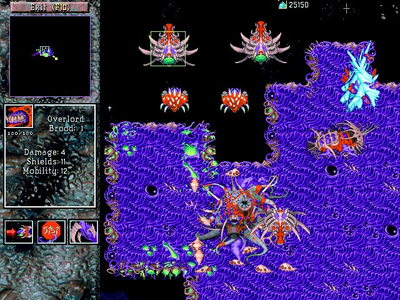 A battle between Protoss and Zerg air units, such as what seems to be early Carriers and Guardians.

Same as above, but with more units. Notice how minerals are in a floating rock. 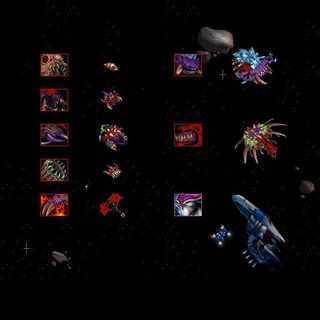 Every Zerg unit in the game, and their corresponding portraits. It's highly possible that every unit could fly. Note that the Protoss Carrier and Interceptors are also here. 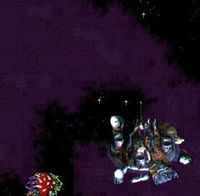 Later on at E3 1997, Blizzard released a new version of StarCraft and was showcased to the public. This new version looked much more similar to the final. It seems the map was always visible (But this probably was done to showcase the map). The UI bears more resemblance to StarCraft II, rather than the final game. It shows which model the unit is, and what kind of weapon the unit selected can use (if it has one). Vespene gas was added, along with very, very early icons. New, menu and diplomacy buttons are also on the bottom middle of the UI. It's also worth noting that the unit selected has a shiny glow around it, whether red, yellow or green. 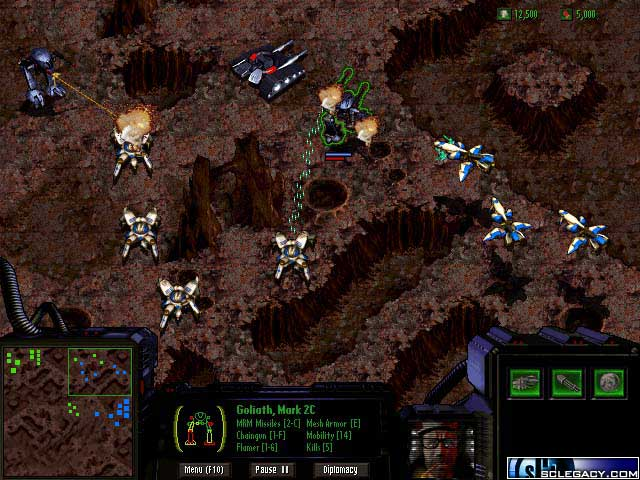 The Scouts are a bit bigger than in the final game, but the Siege Tank and Goliath don't look anything like the final. Goliath's model seems to be a Mark 2C, and its wireframe is really different from the final. Lastly, Jem/Jim from the intro in the final game is the portrait for the Goliath (and many other units!).