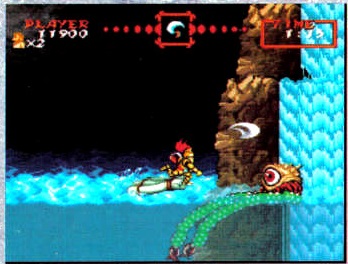 This screenshot, part of a poster in the July 1991 issue of Nintendo Power, shows a completely different Stage 2 boss!

This screenshot of Stage 2 from the August 1991 issue of Nintendo Power shows some different foreground objects, including a lantern of some sort. 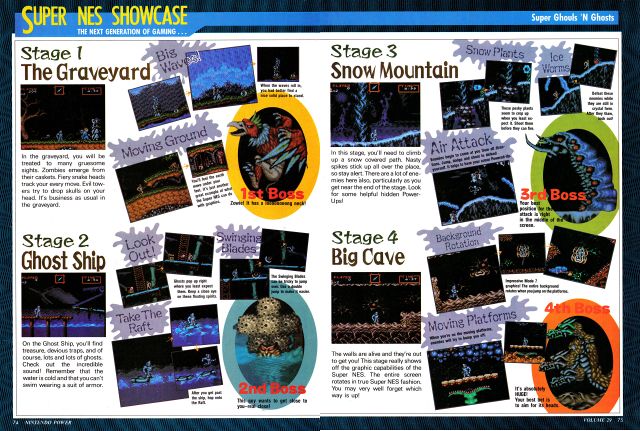 This 2-page thread from the October 1991 issue of Nintendo Power shows a different level order: the first two listed stages are the same as in the final game, but Stage 3-1 here would later become Stage 5-1. Note that the BGMs indexes are still in this order(1, 2, 5, 4, 3) in the final game. Also, on the second page, the « Ice Worms » are described as being capable of thawing, presumably into fearsome, mobile worms, though this might have been made up.

This screenshot from the October 1991 issue of Nintendo Power shows a different, flatter design for the first 4 stages of the between-level map screen to go along with the different level order. The rotating tower climb was already stage 3-2, and here featured wintry graphics to match the rest of the level. The final game's tower climb still has a remnant of when it was ice-themed: the gargoyles on the sides of the towers make a "glass shattering" sound when they are defeated, as if they were made of ice. 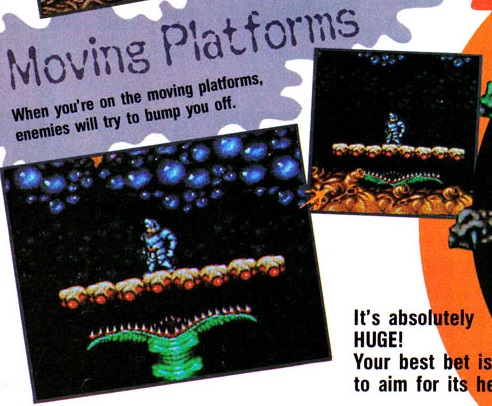 This screenshot from the October 1991 issue of Nintendo Power shows an enemy in the Stage 4 autoscroller completely unlike anything else in the game. It still exists in the prototype leaked in 2020.

Page 78 of the first issue of Super Pro shows the first ending's text used to be displayed lower.

Retrieved from "https://tcrf.net/index.php?title=Prerelease:Super_Ghouls%27n_Ghosts&oldid=1135247"
Categories:
Cleanup > To do
Games > Games by content > Prereleases