From The Cutting Room Floor
(Redirected from Prerelease:Super Mario Bros)
Jump to navigation Jump to search 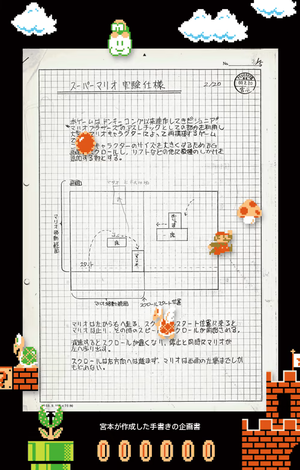 Originally, Super Mario Bros. started development as a prototype created by Miyamoto's desire to have a game where you can control large characters. a rectangle that measured 16 pixels wide and 32 pixels tall, which was obviously just a placeholder until the actual player character was designed.[1] At this early stage of development, the game was on a dark single non-scrolling screen and the player wasn't even able to jump. Later on, the screen became side-scrolling and eventually gained its bright blue background.[2] At this point the game had still been using the blank rectangle template as the character.

However, when Takashi Tezuka noticed how well Mario Bros. was performing in arcades, Tezuka pitched to project head Shigeru Miyamoto the idea of using Mario as the main character. Miyamoto agreed and Mario became the leading character.[1] When Koji Kondo began composing the soundtrack, he first wrote the Underwater theme as it was the easiest to imagine. He was amazed by the early prototype's colors. The prototype consisted of Mario moving about with in front of a blue background and greenery. This rich scenery led to him creating an early theme which he describes as being lazier, laid-back, slow, and carefree. After later playing the game again, he realized this did not match Mario's movement and jumping. Designing a new theme with this in mind eventually led to the iconic theme we all know and love today.[8][9]

At one point, the title Mario's Adventure seems to have been considered for the game in place of Super Mario Bros., at least for the U.S. version. The evidence supporting this is an early sales brochure for the arcade VS. System version, which uses the title VS. Mario's Adventure instead of VS. Super Mario Bros. This version of the brochure features original artwork on the front side, with a description of the game and screenshots on the back. The screenshots appear to be from the original console version rather than VS. Super Mario Bros. as evident by the font not having a drop shadow and the alternate World 4-2 warp zone, which contain the two pipes leading to Worlds 7 and 8 (VS. removed them and only has the World 6 pipe). A later version of the sales brochure uses the finalized title of the game, with the packaging artwork used for the Famicom version on the front in place of the original art (which seems to suggest that the earlier flyer was made before the game was even released in Japan) and the tagline edited to reflect the title change. The backside of the revised brochure is pretty much identical, except every instance of Mario's Adventure has been replaced with Super Mario Bros.

This theory is further supported by the fact that the title Mario's Adventure is registered in the U.S. Copyrights Office with the same register number used for Super Mario Bros. (PA0000273028). 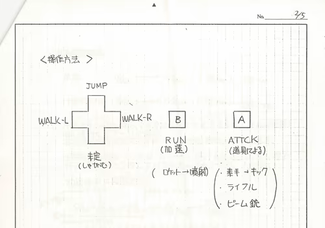 The game originally focused far more on shooting enemies than platforming tasks. The original control scheme was very different from the one we're familiar with; Up on the D-Pad was used to jump, while A either used an item (a rifle or a "beam gun") if Mario was carrying one or caused him to kick if he wasn't.[2] Here, a draft was drawn up to show this concept. Notice the square controller buttons as well!

The description of this concept art reads: "Aims for Mario." The drawing depicts a Koopa manning a cannon. It is likely that this is either a cut enemy or an early concept of the Hammer Brothers. The trajectory of their attack is similar as well. The cannon would later appear in Super Mario Bros. 3, with a similar design; though they appear without a Koopa manning them, and the cannonballs would travel in a straight line.

The description of this concept art reads: "Pacing around naked." The drawing depicts a Koopa Troopa without its shell wearing a tank top, wielding what appears to be a pitchfork. In Mario Bros., if Shellcreepers (conceptually early Koopas) were flipped upside down and left alone, they would pop out from their shells with their white tank-top to flip back their shells. This concept seems to have been dropped from the final Super Mario Bros. game, but would reappear in later Mario titles, with the first being Super Mario World.

Sky Levels and a Ridable Cloud

Ever since the beginning of the games development, Miyamoto imagined Mario flying in the sky. This would take advantage of Super Mario Bros.' original control scheme (seen here). The game originally had sky segments (in addition to the earth and sea segments which ended up being used). These sky levels consisted of Mario riding originally on a rocket. This was changed to then be Mario riding on a cloud. Mario would shoot at enemies (and coins[14]) amongst the clouds/sky with a rifle and a "beam gun". Though six months before completion, Miyamoto "divided the actions" between ground and sky. The sky-based bonus rounds accessible via vines in the final game are apparently a remnant of this idea.[2] The developers gave up on these concepts partly due to memory constraints.[15] This entire concept would later be introduced in Super Mario Land, via its Sky Pop/Marine Pop vehicles and its sky/underwater levels. Ridable clouds specifically would also later be implemented as Lakitu's Cloud in Super Mario Bros. 3 as an item on the map that you ride that would let you skip a level, but more notably ridable clouds would return in Super Mario World, where you could ride in Lakitu's Cloud in a level for a short period of time after defeating Lakitu. 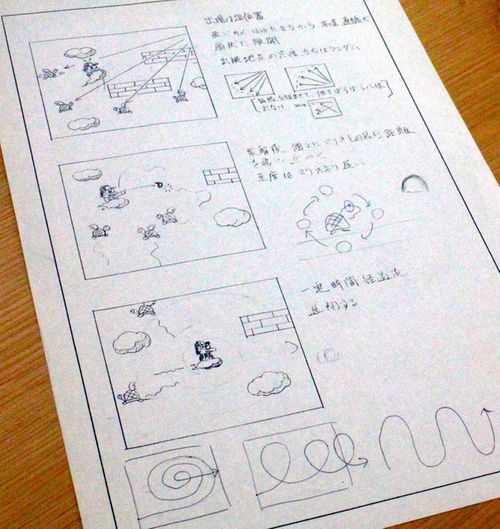 Here is a concept document that was drawn up, showcasing some of these ideas. The cloud Mario is riding eventually also got a concept sprite (which can be seen here). Mario is also able to throw fireballs in the cloud, as seen in the second drawing. 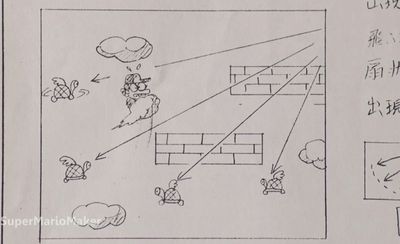 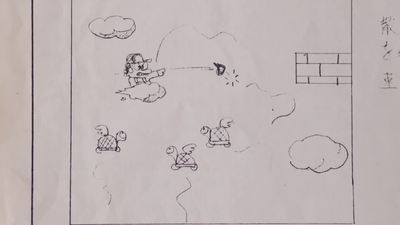 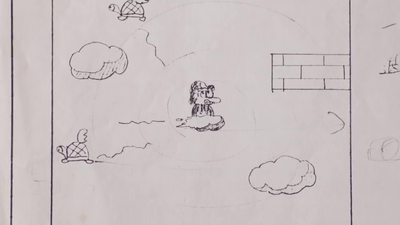 Some close-up shots of this document. 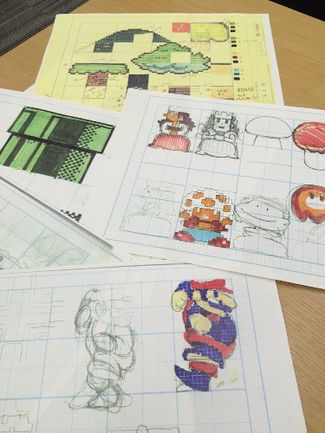 The Title Screen had major differences at one point during development.

This concept art of the Title Screen is the closest to how it looks in the final game, but still has just a few differences. Carried over from the previous draft is:

Besides carrying these elements over from the last Title Screen draft, this draft has differences from the final:

Early in development, instead of scrolling continuously, the game's environments scrolled screen-by-screen[17], similarly to how it was later featured in Super Mario Bros. Special. This was changed before most of the level drafts were drawn. 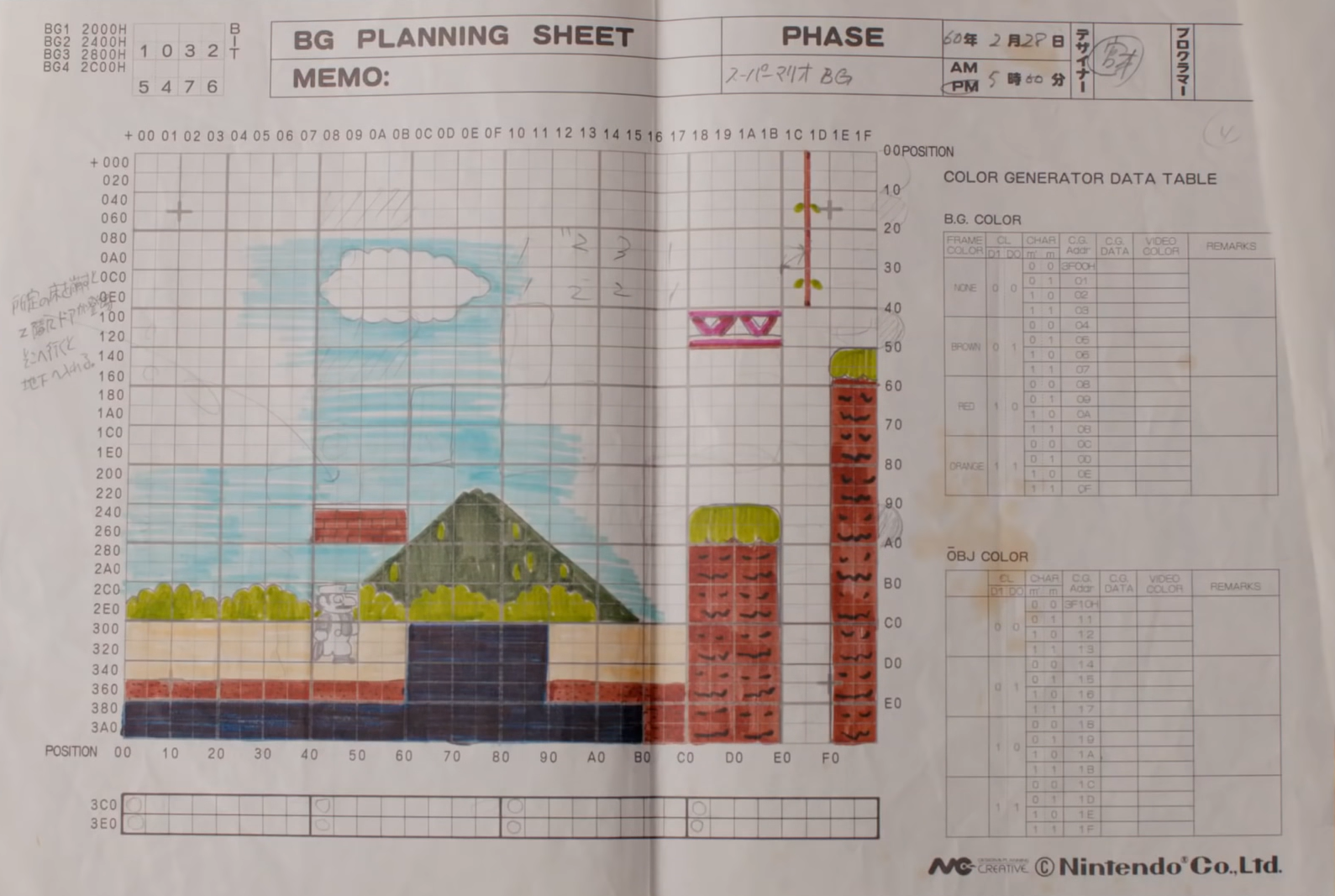 Various elements from Donkey Kong, Donkey Kong Jr., and Mario Bros. were planned at one point with some objects/enemies making it into the final release.[18] A draft of these elements were drawn up. Besides some different looking graphics (most notably the ground tiles appearing behind Mario to create a certain isometric effect, and faces on the tree platform tiles) a red girder from Donkey Kong and a vine from Donkey Kong Jr. appear in this planning sheet. Vines were later added to the game but look and function differently.

This level seems to have been drawn-up when the game was still using its screen-by-screen level format.

The only known image of the level design document for 1-1 has one minor difference, being the first Goomba is on top of the blocks above. The team had developed the levels out of order, with 1-1 being the final level they worked on. Goombas had also been added late in development as it was thought Koopa Troopas would have been too difficult for a beginner. It is possible that the first Goomba was originally a Koopa Troopa.

At the start of the level, the first two Goombas were originally situated on top of the row of Question Mark Blocks. After the first two Koopa Troopas, there is a small wall made of two bricks behind the pair. The lone coin next to the hidden power-up block was originally one block higher up. The two Goombas after the third Koopa Troopa were placed further. The row of coins seen after the first pit and underneath the hidden 1-UP block was lower than in the final design.

The Warp Zone pipes in the original level layout for 1-2 have the pipes arranged at different heights and moved over to the right slightly. This was presumably changed due to the pipe on the far right being too tall for Mario to jump over if he were to get stuck between the pipe and wall (possible case the jump heights were once higher, by one block at least). "WARP ZONE" was incorrectly misspelled as "WARP ZŌŌN" but later corrected at an unknown time.

The beginning of World 4-2 was much easier in the early layout. The hole from which Mario falls from is much smaller. The gaps seen at the beginning were much smaller and farther to the left in the draft. The "tunnel" section was much longer. There were four coins in the original draft instead of the three coins seen in the final.

Multiple Koopa Troopas were removed from the final level, with the early design showing one before the moving platform and two after the platform. This gap was originally smaller by one block. The four hidden blocks leading to the Warp Zone vine were originally a row of three Question Mark Blocks. The brick block containing the vine was originally placed on the right side instead of on the left and had been planned to appear inside of a hidden block rather than a brick block. The Koopa Troopa seen stuck in between the pipes of the final game was not present in the early draft.

The draft design lacks any of the Buzzy Beetles or Piranha Plants in the final. The second-to-last pipe was originally one block taller and there is no multi-coin block seen beside it.

The only difference from the draft design is a single additional block that was added underneath the staircase at the start of the level.

The bonus rooms appear to have gone through many changes while being drafted as can be seen by the many scribbled and whited out parts. The bonus rooms were designed on July 15th and later revised at unknown date.[19] 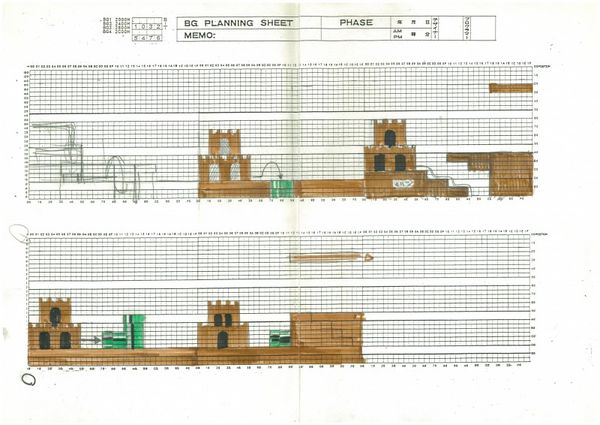 Retrieved from "https://tcrf.net/index.php?title=Prerelease:Super_Mario_Bros.&oldid=1348776"
Categories:
Cleanup > To do
Games > Games by content > Prereleases