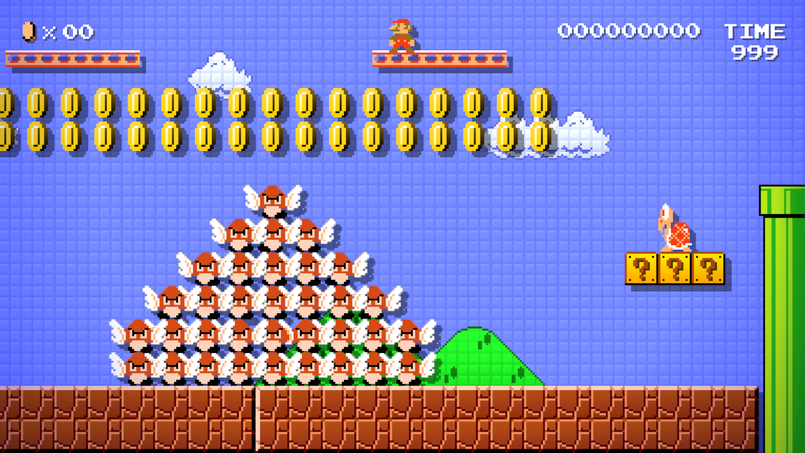 The E3 2014 build of this game had a very different look to the Super Mario Bros. game style. All the objects had heavier shading to them, and coins, bricks, and blocks looked shinier than in the final. There is also the text TIME instead of the timer icon. The most notable difference is that the background looks like a grid as opposed to the final game, where the backgrounds look just like the original.

It's also worth noting that the timer shows "999" here, a value that is not available in the final version. This timer kept counting down even while editing the level. Once the timer went under 60 seconds a message saying that only one minute of demo time was left and the music would speed up, even in the editor. Once the timer hit zero, the demo would end and the player would be asked if the level they had made could be saved for review by the developers.

Super Mario Maker went through many changes before its release.

The Course Maker from the E3 2014 build had many differences from the final. There are some major ones, like there being an extra block for power ups, and Coursebot's absence. The trash can was later replaced with the Reset Rocket, and Undo Dog resembles his sprite from Mario Paint. There was originally a button to select the hand and the eraser instead of just the eraser. The eraser's sprite was also meant to replicate the Mario Paint one.

This build only had 14 items total, with no rows. The ground course element was a block you extended instead of placing down the block itself. Extending blocks looked different, and the narrator singing the course element you placed sounded more unintelligible and subtle. The Trampoline used the sprite from Super Mario Bros., rather than the updated sprite used in the final.

The Game Awards trailer looks closer to the final game, but not completely. The starting arrow is first seen here, with a shadow, unlike the final. Mario's starting point is one block back. The Hand, Eraser, Undo Dog, Trash Can, and Play button have all been changed to look more modern. The Item box at the top had an "X" next to the items rather than a number, and the arrow button is smaller. 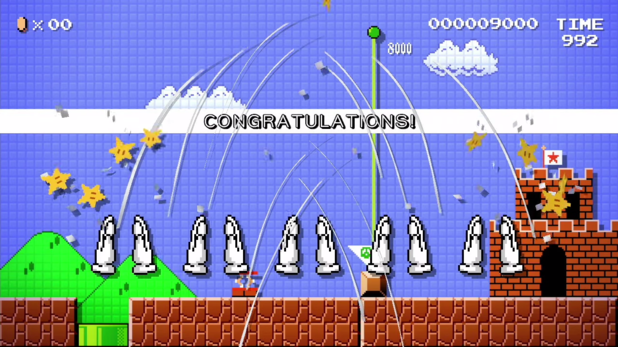 When clearing a stage in the E3 2014 build, you see the words, "CONGRATULATIONS!" covering the screen followed by someone shouting the word with streamers, confetti, falling Super Stars, and the clapping hands from Mario Paint. In the Super Mario Bros. game style, the hands look pixelated, while in the New Super Mario Bros. U game style, the hands have a more high-resolution look to them. The final game only uses the smoother clapping hands when you clear a row of courses as a world in Coursebot, and the original hands aren't used at all.