This page contains notes about Super Monkey Ball 2's development, and the differences between pre-release media and the final game. 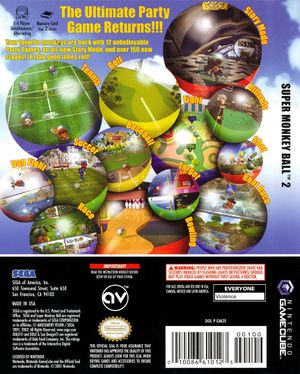 The ball on the upper-right shows Triangle Holes in the Challenge Mode version of the whale.

The color of the floor texture in the screenshot matches up exactly with the World 6 floor textures seen in the Challenge Mode version of Triangle Holes in the final, and the whale is notably brighter. The lighting appears to match that found in World 6 in the final minus the "steam" texture placed over the camera. This isn't a result of any potential modifications to the image, as AiAi looks normal. It's possible the whale background was used as a placeholder for this level at this point in development or the whale was supposed to be featured in Advanced Floors 21 through 30.

Some images released to various video gaming media outlets show the game with the HUD of its predecessor. The HUD appears to be from the Japanese edition of the game (speed reported in km/h, 'banana' instead of 'banana(s)'), with no time bomb. The level display reads 'FLOOR 1', possibly indicating that the level was launched from the stage selection screen of the debug menu. These screenshots feature the nearly-final level background designs, though the stages on which the screenshots were taken are not known. The only date associated with these images is May 19th, 2002 for the first screenshot in the following gallery. The dates of the rest are unknown.

A series of images of the game were apparently released to various gaming media outlets prior to the game's release. The earliest date associated with these images is April 30th, 2002. There are various differences between these screenshots and the final game. No floor names are present in these screenshots, and the environments for the beginner level seems to change more times than in the final game. Interestingly, some of these levels, such as Spinning Top, have properly textured level elements that fit the theme of the world, along with fitting floor textures as well. It is unknown if this intended to be in the game, or if it was simply to show off the game's environments.

The E3 trailer for the game has a few differences from the final, released game. The stage clear and cutscene dialog fonts are different and much thinner. Stage names are missing, and the greater diversity of stage backgrounds seen in the above press images is seen. The circular logo that is found in the game's files is also used as the main logo for the game.

The IGN trailer appears to have the same differences from the final game as the E3 trailer. The still frame following the SEGA and AV logos at the start is formatted similarly to the game's title screen, with a different background and the unused circular logo. The date associated with the IGN trailer is May 16, 2002.

IGN released a gameplay video prior to the release of the game on May 23, 2002. The stage clear font is much thinner, and the monkey blasts off immediately after passing the goal tape. The lower camera found in the July demo version of the game is noticeable here.