This page details prerelease information and/or media for The Lion King (SNES).

Despite having three varied prototypes, there is at least one other prototype with noteworthy changes. These screenshots were featured in Nintendo Accion issue 21. Some were featured in Superplay issue 23 as well.

Both magazines suggest that these screenshots came from a build shown at CES.

All screenshots show a different life counter font, closer to the one shown on title cards. This is interesting, because it suggests that it was changed only briefly between the early prototype and the 0.21 prototype.

As seen in early prototypes, the health bar and roar bar are switched. Speaking of which, they're way too large for the levels they're in.

Pride Rock can't be seen so high in the background in the final. The ground seems to be more saturated, but that could be due to the scan.

The boulder is nowhere near as large in the final. The one shown here resembles those found in adult Simba's levels, taken from the Genesis version of Aladdin. There are no large boulders in the early prototype, but the 0.21 prototype uses the ones found in the final.

The hyenas have a special animation for popping out of the skull, thus we never see one inside it like this. 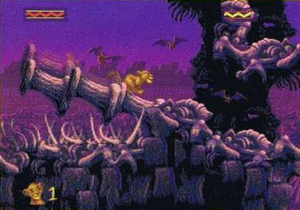 These screenshots are again within the timeframe of the early prototype (which has a wildly different Elephant Graveyard) and the 0.21 prototype.

Before the game's release, Westwood uploaded four music tracks to their Press FTP, as well as shorter, otherwise identical, 19 second edits to these tracks.

These audio files appear to be the work in progress files, taken before they were resampled and resequenced for the SNES.

Retrieved from "https://tcrf.net/index.php?title=Prerelease:The_Lion_King_(SNES)&oldid=1265999"
Categories:
Cleanup > To do
Games > Games by content > Prereleases