This page details prerelease information and/or media for The Simpsons: Hit & Run.

The following document aims to outline the pre-release coverage of The Simpsons: Hit & Run and the changes made to it during late development.

Two pre-release asset discs of the game was found in 2016, which contained several information changed in the final game, dated around June to August 2003. There are several pink notes regarding editing out or correcting some parts or red notes indicating changes.

Images found in Documents and folders in the leaked Simpsons Hit and Run Source Code.

Bundled with the PR disc was a number of screenshots dating as early as 2 April 2003; these predate even the public announcements of the game. One thing to note is that the filenames of many of the April screenshots skip a large amount of numbers, implying this was only a fraction of the total screenshots taken of this build.

A screenshot of Bart standing near Snake's hideout, dated 8 April.

While most of the screenshots are HUD-less captures, a number of Level 7 images depict Homer in front of the Springfield Elementary School on a vastly different rendition of the seventh level.

The earliest report of a "mission-based driving game" starring the Simpsons can be traced back to a brief article published by GameSpot on April 24, 2003. Not many details are revealed aside from the cast, the gist of gameplay and the platforms it will be released on. Given the short length and the "As part of its release of pre-E3 information [...]" portion of the text, it is likely that this information was simply relayed from a press release document.

Hit & Run would later make an appearance at E3 2003, running from May 12 to 14, within the vast portfolio of then upcoming games from its publisher, Vivendi Universal. Not much else is known about the state of the game at this stage.

A GameSpot feature from July 8, 2003 allegedly describes a GameCube build of the game showcased at a non-descript press event from Nintendo. The demo featured appears to have been limited to the first three missions of the first level, which seem to be unchanged from the final product. It is suggested that gameplay elements and interactions appear to have been finalized, although camera issues are present.

A significant number of publications were granted access to late builds of the game since E3 and until September for previewing purposes. Contents have been sorted by outlet chronologically.

The first footage released to the public was a Sizzle Reel made from the GameCube version published by IGN on May 15, 2003 shortly after its appearance at E3. The video itself depicts driving and minimal character control within the first, sixth, fourth and second levels, starring Homer, Bart, Marge and Bart respectively. Despite lacking sound, a handful of aesthetic differences can be noticed when compared to the final product.

Several screenshots of the game were submitted to a number of press sites prior to release but were not included with the PR Disc images. These portray a build that seems to be somewhere between the blue circle HUD and the final (possibly dating it around May, as the final design had been implemented by June), and show the first appearance of the circular Hit & Run meter with a different design.

An E3 demo gameplay video shows a mostly complete version of the game, although with a few noticeable changes from the final game:

On August 8 and August 23, 2003, IGN released a whopping 17 videos depicting the PlayStation 2 and GameCube revisions of the game. These range from snippets of gameplay to full cinematics, all from the first level. Of upmost interest are the prerendered cutscenes, some of which are noticeably different to the ones in the final game.

Published on August 31, 2003, Worth Playing's coverage of Hit & Run is perhaps the most interesting, as it features a wealth of self-produced screenshots from the PlayStation 2 version, some of which show discrepancies not seen in the previous materials. Referred to as a "limited beta copy", this particular demo allegedly includes a "character select screen" with a limited roster and not much else.

The gallery also reveals that the characters were displayed on the interface as 3D renders rather than 2D sprites.

Published on September 5, 2003, GameSpot's coverage of both the Xbox and PlayStation 2 version comes with little info and very low quality JPEG images. Delightful!

Other Things of Note

While pretty much resembling the final version, there's one thing noticeable in the trailer:

Present in the manual for the GameCube, PlayStation 2 (and the Xbox, to some extent) releases are a few not-quite-final screenshots displaying more of the 3D rendered character portraits. Please note that the second to last picture only appears in the former, as the latter uses an updated picture with the actual 2D mugshot. A date on the Load Game menu detailed on one of the first pages suggests that these pictures might be from late July/early August 2003. 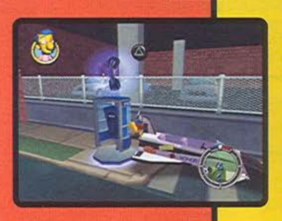 There is also a screenshot showing an early version of the radar.

The title screen also appears to use Homer's Road Rage model. The model can be found in the final in the files for the main menu. Originally the newspaper was placed on the carpet before it was swaped with the wasp camera, also, the newspaper itself is missing it's yellow outline.

The text that appears when you get Hit & Run also appears to be different, being all in caps and in a slightly different font. 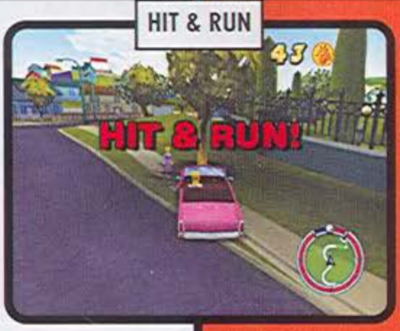 The radar also appears to be a lighter color around the edge and the road is white instead of grey.

The same changes apply to this screenshot: 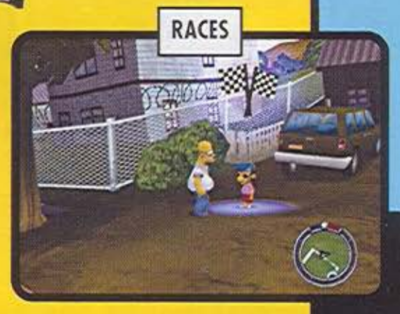